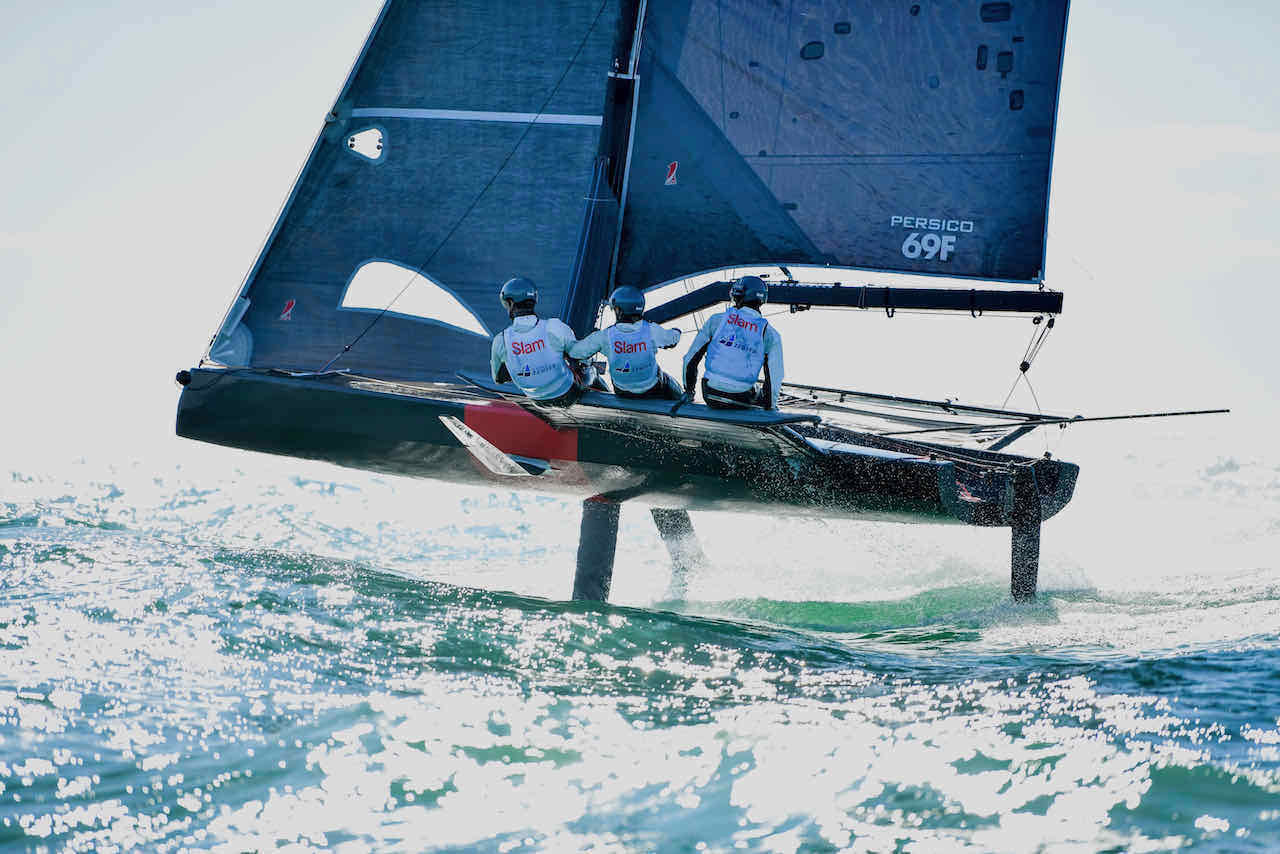 It’s race time for the 24 young international sailors from eight countries this week in Gaeta, Italy who will compete in the first round of the Youth Foiling Gold Cup in the new Persico 69F class.

While the world has been enthralled but the fast speeds and close racing in the Prada Cup, the Youth Foiling Gold Cup brings the high intensity of close foiling action to a new generation of high-performance sailors who will no doubt graduate to the full-size Cup in the future.

Rune Jacobsen, team manager of Hong Kong’s team Agiplast confirmed that the ambition for this circuit is to become the pinnacle event for youth sailing. “Most of the sailors in the current America’s Cup did the Youth America’s Cup,” Jacobsen said. “To develop high-performance foiling sailors, the Youth Foiling Gold Cup is a perfect match.”

The competing teams are:

The start of the new round of competition naturally means that teams are getting to grips with the equipment, in this case the high-tech foiling Persico 69F designed by Wilson- Marquinez and built next to the Luna Rossa AC75s at Persico Marine and developed by the 69F team.

Some teams have more work to do than others however, as three teams- Team Young Azzura, Team Agiplast and Team DutchSail- have all racked up serious training time on the new foiling platforms while other teams flew for the first time just last week.

Pieter-Jan Postma, Dutch Olympic Sailor and Team DutchSail coach, says that they have approximately 70 days on the platform but while they “have more hours in the boat but the regatta is very long. Good sailors can learn the boat fast during the regatta”.

Even for one of the most experienced teams in the fleet, COVID has impacted their race preparation. “We’ve been mostly training on our own… there haven’t been many opportunities to do speed testing”.

While some teams will be focussing on the finer details of their race craft, American Langston Goldenburg and his crew, 2021 Olympic Nacra 17 team Riley Gibbs and Anna Weis, are just now getting to know their new steed. “We’ll have to extract as much value as possible from the training session. We have just 6 days to learn the boat and the local conditions in Gaeta”.

One advantage the new teams have is that the strict one-design class is managed by a professional shore crew and the 8 teams will cycle through the 6-pack of race yachts to ensure a level playing field.

Sharing equipment lowers costs for the teams and reduces the event’s environmental footprint because each team does not need its own boat in order to compete.

Langston Goldenburg certainly appreciates the opportunity that the shared boats create.
“Having shared services allows small teams to compete against the big boys. The racing is tighter. When you can’t tune your own boat, you hop on the boat and go. You’re worrying about different things. All the small things go out the window, you just focus on making the boat go fast.”

The latest technology and fast young sailors leads to lots of speed – 34.9 knots of speed. Team DutchSail laid down the gauntlet with a new top speed for the class in training, but they are surrounded by sailors with world class credentials of their own who are more than ready to accept the challenge. The fleet contains sailors currently campaigning the Nacra 17, 49er FX and Finn in the Olympics as well as European champions in the WASZP and other foiling classes.