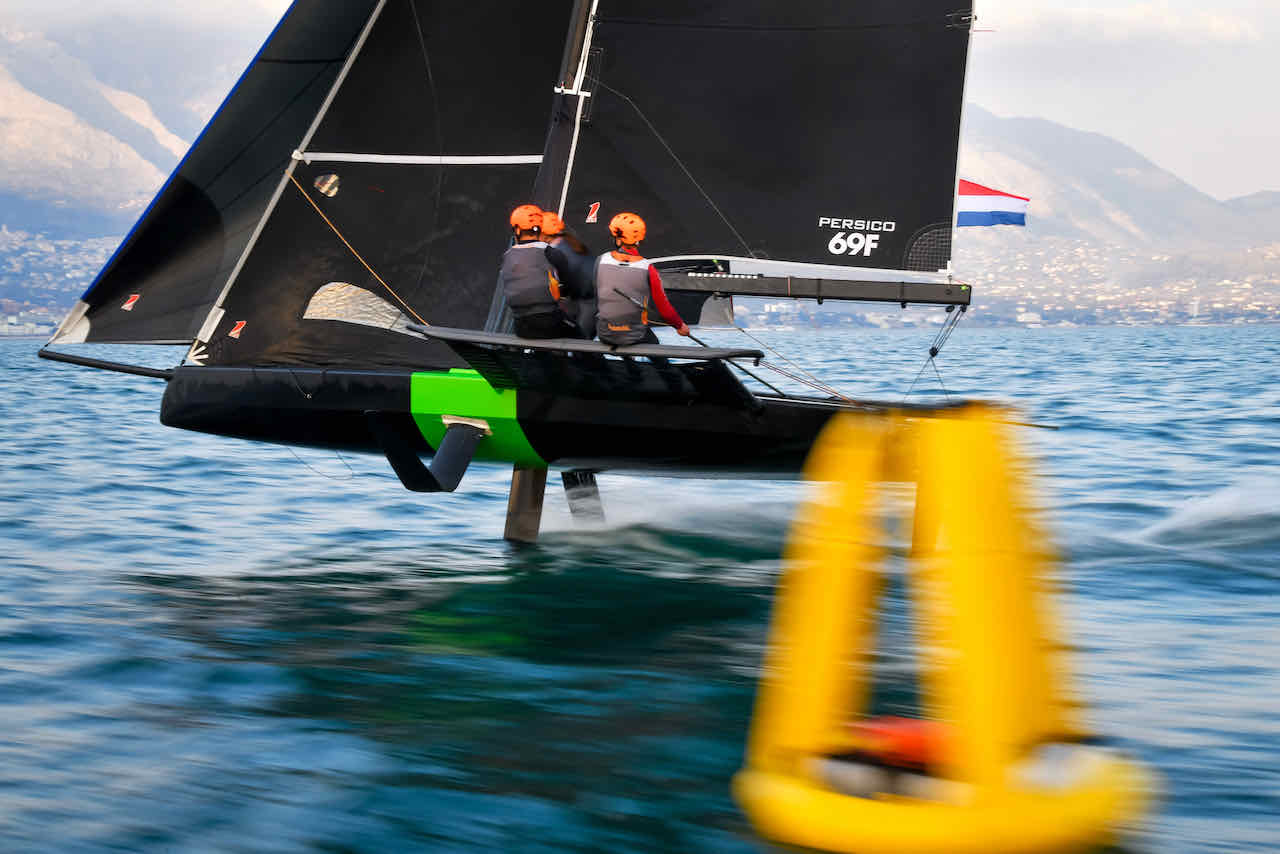 While the drama in the America’s Cup might be on the tip of every sailor’s tongue at the moment, a new generation of foiling sailor has been sharpening their skills off the Italian coast on the Persico 69F.

This new foiling one-design monohull closely resembles the AC75s in New Zealand, from the carbon fibre foils to the resulting speeds, but at a more accessible size and budget.

The Liberty Bitcoin YFGC is an international series of regattas raced by 18 to 25-year-old sailors from the Netherlands, USA, Hong Kong, Spain, Italy, Norway, Switzerland and Curaçao.

The teams include talent from the highest levels of our sport, including current Olympians, and it was a wonder that the boats could fly at all given the medals and world championships that sailors carry on their résumés.

For all the hype of flying boats, the early season conditions in Gaeta were often light and variable and constantly pushed the sailors to finesse the trimming of the sails, and the foils, to fly. For a young class, whose first races were held in July last year, such challenging conditions made for very steep learning curves for the teams who learned to change gear several times per race, up to six races per day.

69F Chief Sailing Officer, Dede De Luca, was very happy with the season’s first official event.
“We completed 28 official races and almost as many practice races, so we are very lucky to have done so much sailing, especially as most of Italy is now in lockdown again. The racing was just like the America’s Cup too, with exciting sailing and big leads that could be quickly erased.”

De Luca, a former America’s Cup sailor himself, offered crucial advice to the sailors, especially to the smaller teams without coaches. While impressed by the Dutch team’s performance, he welcomed other teams to come and take them on in the next round.

“The Dutch are not impossible to beat, they also made mistakes and they still have space to improve. With quality training, the other teams can certainly catch up, especially in the next round in Limone where the more consistent wind will mean that the training days better resemble the racing days.”

For DutchSail – Janssen de Jong’s coach, Olympian Pieter-Jan Postma, the momentum going into the next round will be a huge boost to an already strong team who won 8 out of 10 races in the finals.

“For the team, this win is the proof that we are on the right track; It gives us energy and belief for the future! The key was creating a culture in the team where we could be open and honest, and this growth mindset allowed us to turn every challenge into a stepping stone to success.”

(Norwegian team Xela Racing and Spanish team Youth Bravo España competed in the qualifying rounds but were eliminated before the finals.)

Click here for more information on the Persico 69F, the 2021 season, and opportunities to join the class.