Skip to content
You are here
Home > LATEST > You cannot be serious! 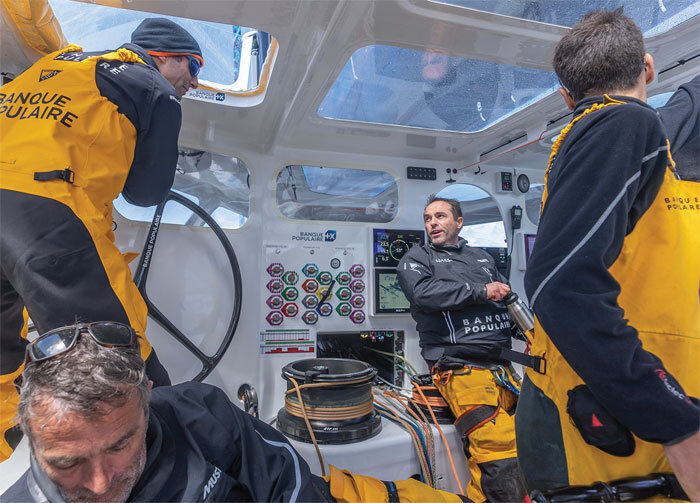 Challenge the engineers at Harken about just how light they plan to go with their next generation Air winch and you are in for a somewhat predictable response.

We’re used to technology trickling down but sometimes it goes the other way. That’s what happened with Harken Air winches, which have moved steadily upwards in terms of size and complexity through grand prix racing fleets over the last eight years, delivering performance gains and major weight savings with a brilliant piece of design – a super strong, featherweight, fully optimised structure with a big hole in the middle and a tiny gearbox on the inside rim, replacing a large, solid lump.

‘The Air winch started as a small single-speed winch that we developed specifically for the 35th America’s Cup in Bermuda,’ says Harken’s director of global of grand prix and custom yacht sales, Mark Wiss. ‘They’re still using it now in SailGP.’

In the 34th America’s Cup in San Francisco, Harken saw a change in how the AC teams were sailing. ‘Each team selected a different winch for their mainsheet and we realized that to foil the boat and keep it flying they were trimming the wing in a completely new way,’ Wiss explains.

‘It wasn’t just trim on the winch and adjust the traveller, it was a very dynamic, always moving situation and the fact that all the teams used a different winch meant that they all had different philosophies for what they wanted to achieve. So this was an opportunity for us to really focus on a winch for that function: aerodynamic with a short, wide drum. The gearbox inside it allowed teams to match gear ratios to the way they sailed. It was so small compared with the area inside the drum that we said well what about all the rest of this material here that’s normally filled with stuff? Let’s just remove it. And that became the Air winch.’

Feedback from the sailors was very positive and market demand was strong. ‘We needed to develop a bigger version right away for the TP52s,’ Wiss says. ‘That was the Air 250. Then the last America’s Cup gave us the opportunity to develop the Air 550, which was used by all the teams.’ Non-titanium versions followed – the 300 and 600 – for “normal” high-end racing boats. Then three Ultim racing teams asked for the same thing, supersized, for the new foiling maxi trimarans they were planning to build. Thus Harken developed the Air 900.

The end result is remarkable. Harken’s previous model, the 1130, already the lightest on the market, weighs 41kg. The Air 900 weighs 31kg. The only winch that can be considered a competitor weighs in at 77 per cent more, at 55 kg. But it’s not just about reducing the weight of the winch.

The shape and proportions of the Air winch bring benefits too. Increasing the drum diameter allows it to handle high loads with fewer wraps, which in turn (no pun intended) reduces the risk of getting an over-ride on the drum in the middle of a manoeuvre. The drum has also been optimised for the new generation of ropes, in terms of both size and grip, and the whole self-tailing mechanism has been redesigned to handle a wider range of line sizes including today’s significantly thinner lines with their more slippery covers. Thinner lines have allowed the profile of the Air winch to go a bit lower. So did the observation that in typical use, the turns of rope on a winch leave about 20 per cent of the drum unused. Finally, Harken’s design team got the winch’s profile even lower – and reduced its weight even further – by eliminating the winch base completely and designing it to be moulded directly into the deck.

The low-profile shape of the Air winch design does more than just reduce its aero drag. Its total surface area is about the same as an equivalent winch with regular proportions and the wind resistance is 15 to 20 per cent lower, due to it being closer to the deck. That’s significant but not actually a primary concern, Wiss explains, because grand prix boats are increasingly putting their winches (and teams of grinders) low and largely out of the air flow. The big benefit of the lower profile is the mechanical advantage gained from lowering the height of the rope on the drum, bringing it closer to the deck and thus substantially reducing the strain on the deck itself. With lower forces acting on the deck, less reinforcing structure is needed and more weight can therefore be saved.

The Air winch fundamentally changes how winches are made, and scaling it up to the latest, largest model in the range was a technical challenge in its own right. ‘When you try to make a winch with a bigger diameter, typically the weight increases so the challenge was double: increase the diameter but make it lighter,’ says Michele Cazzaro, chief engineer at Harken Italy, who led the development of the Air winch. ‘And it was even harder because we had to use more or less the same materials.’ Harken’s existing grand prix winches – refined and optimised with decades of R&D – were already made out of highgrade titanium and carbon fibre.

‘Moving the gears sideways, making the gearbox very compact and attaching it where you have the final pinion was the first possibility to significantly reduce weight,’ Cazzaro explains. ‘And the second was to push the machining of parts to the absolute limit. We start with a solid, largediameter bar and remove 85 to 88 per cent of the initial material. You need a special tool to undercut in certain areas so it’s hard to machine.’

The machining process has its own inherent issues. ‘It’s a challenge from a design point of view but also for production,’ Cazzaro says. ‘The initial bar has an internal tension so you can have a lot of distortion when you finish all the machining. We needed to implement a specific machining process to allow the material to relax step by step. And then we had to optimise all the composite parts. We did a lot of FEA analysis to distribute stress, spent a lot of time in simulation to remove every gram from each single component. All the parts have a complex geometry at the end after all the milling and machining.’

The tuning of the product is as important as the design, Cazzaro says. ‘It’s very good to do that with the customer directly. Like the AC teams, the Ultim teams use our facilities to learn which ropes are best to use and the best number of wraps to use in different load conditions and manoeuvres. We try to be part of their team in this way.’

‘The grip and interface between rope and drum is very difficult to simulate theoretically and takes a massive amount of time to validate at the end of the testing,’ Cazzaro explains. ‘Fortunately we have a facility where we can simulate up to 15 tons of load with a long elastic system. At the end of prototyping, ex-Macif and Banque Populaire each spent a couple of days with us testing all the different ropes they have, in wet and dry conditions. We have several drum geometries – the drum might seem to be pretty straight but we have some alternative shapes and different surface textures to find the best compromise between having the grip to pull and being soft enough to not jump, inflict undue wear on the ropes or make excessive noise.

‘The technology of the grip on our drums is changing all the time because rope cover materials – polyester, technora or PBO – can have significantly different behaviour,’ Cazzaro says. ‘Sometimes we put a specific grip on the drum because the customer wants a specific type of rope cover to be used. There are also different coatings available – our white and black drums have a big difference in their grip characteristics.’

The Ultim trimarans’ winches must be manually powered, but Harken has other plans for the product. ‘The trend these days is towards powered systems, straying away from pedestals and going towards powered systems,’ Wiss explains. ‘So the Air 900 is available with a range of different electric motors. Whatever voltage, DC or AC setup, we can accommodate that. If they have hydraulics, depending on what they want to achieve with efficiencies, speeds and performance, we have a range of motors.’ The gearing inside the winch can be optimised so whatever power source is used, the dimensions of the drum stay the same.

‘It’s a very flexible product,’ Cazzaro says. ‘A lot of sensors can be installed to monitor what’s happening on the winch and to record data that can be downloaded and analysed after a race. We provide sensors to monitor both dynamic and static loads on the winch and a speed sensor so you can track how much the winch has worked, at what speed. To maximise performance we have a sensor to detect when it’s in first gear and when it’s in third – typically the first and third gears have the same direction of rotation – so you can optimise the output of the motor to maximise the pull for the gear you’re in.’

So what’s the next step in Air winch evolution? There won’t be any deck winches beyond this size, says Wiss, but the technology is being transferred to more powerful captive winches. ‘We have superyacht clients who are looking at record-breaking distance runs and they’re asking us to take another deep dive on weight reduction,’ he says. ‘I did not anticipate that but the market is asking for it.’