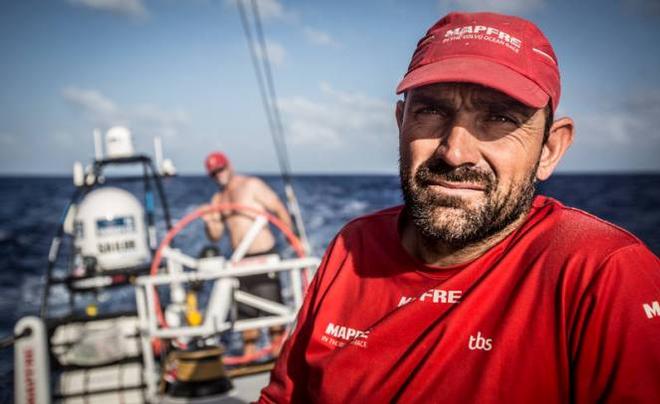 Some good news for Spanish Volvo Ocean Race fans – one of the country’s most popular sailors – Olympic 49er gold and silver medal-winner Xabi Fernández – believes there are good odds that he will lead a Spanish challenge in the 2021 edition of the round-the-world marathon, now known as The Ocean Race.

In an interview with the French newsletter Tip & Shaft, 42-year old Fernández confirmed he was working on a campaign – possibly funded once again by Spanish insurance company MAPFRE.

“MAPFRE are very happy with the last edition,” Fernández told Tip & Shaft. “But we know it will be hard in terms of the negotiations. You need quite a lot of money this time, that is the hardest part of the race always – finding the money and putting the budget together.

“But we are all working hard and are pretty sure we can do it. If everything goes OK, we should be in the next race.”

After starting as joint favourites with eventual winners Dongfeng Race Team, Fernández led the Desafio MAPFRE team to second place in the 2017-18 edition of the race.

Dongfeng, MAPFRE and the Dutch entry Team Brunel all started the final leg of the race from Gothenburg, Sweden to The Hague in the Netherlands effectively tied on points, making the 1,000-nautical mile leg a do-or-die winner-takes-all sprint down the North Sea.

There was nothing in it between the three top teams for much of the leg and on the final morning MAPFRE looked like they might have done enough to clinch a long-dreamed of first ever Spanish victory.

It was not to be however, as Dongfeng’s riskier shallow water inshore route began to pay dividends in the final few hours, earning Charles Caudrelier’s crew their first leg win of the race and delivering them overall victory.

Despite this crushing disappointment Fernández believes his team sailed “a very good race”.

“It was pretty painful after having got so close to finish how we did,” he said. “But the organisation and the feedback after the race was super-good for us and we are more than happy.

“I don’t think we have any specific regrets. I have tried hard to see all the good things we did: we did a good preparation before the race, we sailed quite a lot but not too much, the experience on board was good to guide the training, and we all enjoyed the race quite a lot.”

“I am just starting to find my feet there as well. The nationality rule means I will soon need to be there full time, but right now the design team is working full on and it is not so busy.”

Fernández believes the upcoming edition of The Ocean Race – which is scheduled to start in 2021 and will for the first-time feature IMOCA 60 designed foiling boats – will be very different to the last two editions sailed in identical one-design boats all built by the same boatyard.

“It is like going back to the Volvo 70s,” he told Tip and Shaft. “Trying to raise a big budget and trying to be involved early enough to get the design going early.”

Budget-wise he thinks it will take in excess of €25 million to put together a credible campaign capable of winning.

“It is hard to know – there are so many ways to do it,” he admits. “But I think it should be over €25 million to do a good race – that is much more than the last team. That will of course be refined depending how much you want to train, what you want to do here and there. I think you need to have enough time to design and build a boat and have a good eight, nine or ten months to prepare and train with the boat.”

Asked if he would opt to train in an existing IMOCA 60, Fernández was lukewarm on the idea.

“Sometimes you can overcomplicate things taking an old boat. The IMOCA class is developing so fast that having an old boat to train with may guide you the wrong way. I think here you have to design and build a machine you have trust in, and in the designers.

“One of the problems with these boats will be reliability, making sure they don’t break. There is a balance to be found in these boats, so having enough time and money to design a good boat, to not be in a rush, having enough time to train and to have time to do a couple of foil sets, and try them properly.

“I don’t think it is an idea to get crazy and go training with an old boat.”