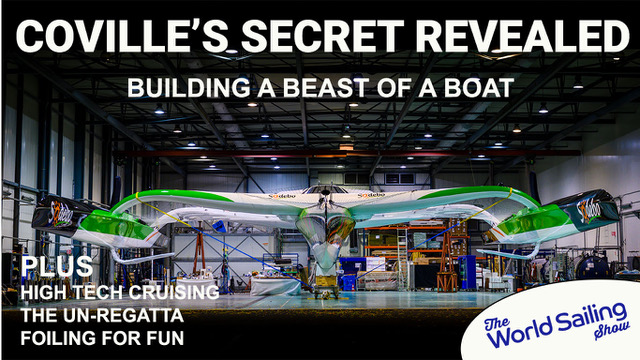 On the May 2019 episode of the World Sailing Show:

Coville’s secret revealed – The new Sodebo
As Thomas Coville crossed the finish on Christmas Day 2016 to set a new single handed, non-stop around the world record he was already thinking about how he could shave off more time on his next lap of the planet.

Twelve months later, his hunch that there was a faster way round was confirmed as Francois Gabart sailing Macif slashed seven days off the record time.

Two years after his circumnavigation, Coville’s new Ultime class trimaran rolled out through the doors of the Multiplast yard in Vannes, France. But this was no ordinary Ultime, not that there is such a thing. The new Sodebo is a radically different beast.

We talked to Coville to find out why, as well as taking a time lapse view of how Sodebo was built.

The Un-Regatta
How important is winning? Should our kids be focused on outright success from an early age? Does it help keep them in the sport into adulthood?
There’s a growing concern that such a hard focus on results is not always the right way to inspire the next generation.
Among the various different innovative approaches to making sailing more appealing is one that caught our eye. At Mission Bay Yacht Club’s Open Bic North American championships, the emphasis is on fun and the competitors appear to love it.
We think the ‘Un-Regatta’ could provide an exciting template for the future.

The Eagle has launched
Not everything that is fast is bound for the race track and not everything that flies on water does so at the hands of decorated racing sailors. The technology trickle down from the America’s Cup and other foiling events is starting to change thinking outside of the racing arena. American builder Fast Forward Composites is looking to take the new technology and use it to create a radical, fast cruising cat. They’ve called it the Eagle 53 and this month we take a close look at this exciting new cruiser.

A new route to the America’s Cup
The road to the next America’s Cup in 2021 has changed following the postponement of the first AC World Series event that was due to take place in Cagliari in Sardinia during September this year.
Emirates Team New Zealand’s Kevin Shoebridge explains.

Alternative foiling for fun
As foiling spreads throughout the sailing world, racing is frequently the focus for the action. Yet, some are seeing different ways to enjoy the foiling revolution. It might not always be sailing, but it certainly looks pretty cool.