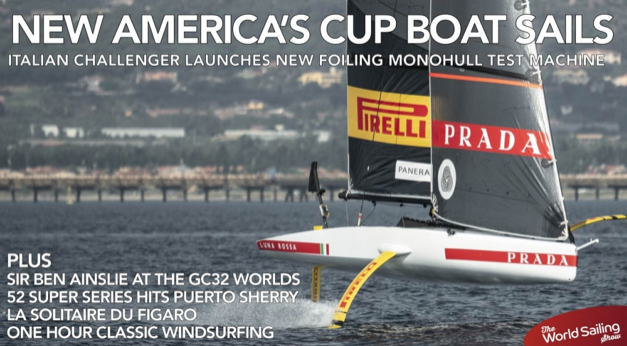 On the August 2019 edition of the World Sailing Show…

52 Super Series back in action in Puerto Sherry
Round 2 of the 52 Super Series saw the Grand Prix monohulls battling it out on Spain’s Atlantic coast. The German Platoon arrived in confident mood after victory in Round 1 in Menorca, while Russian entry Bronenosec joined the series with a brand new boat and were quickly up to speed. The close racing would mean all but one of the 8-strong fleet would taste victory during the regatta. Points were at a premium as heavyweights Quantum, Azzurra and Provezza ground out results in their bid for glory.

International racers join French veterans at Solitaire du Figaro
The 50th edition of the Solitaire du Figaro saw France’s rock stars of offshore sailing competing in the four-leg single-handed race around the English Channel. Vendée Globe winners like Michel Desjoyeaux and Alain Gautier come back time and again to take on the race that exhausts solo sailors as they race four legs of around 500 miles each. The French have always dominated this offshore world and so this year a new trophy was launched to encourage the international field – the Vivi Trophy, for the top non-French finisher. Seven international sailors entered what was to become a gruelling test of stamina and commitment with the opening leg including a trip across the Irish Sea and past the legendary Fastnet Rock before several crossings of one of the world’s busiest shipping lanes. The World Sailing Show followed the race from the opening moments to the exciting finale in the English Channel.

RDD One Hour Classic rocks Lake Garda
Garda-Trentino was the setting for one of the biggest events in the slalom windsurfing calendar – the RDD One Hour Classic. The aim: to set the most laps and the furthest distance on the east-west course across Northern Italy’s picturesque Lake Garda. Bruno Martini was aiming for back-to-back victories on home water, while Turkey’s Lena Erdil was the sailor to beat in the women’s race. The three-day event also now includes a foiling race as the new discipline continues to grow.

Luna Rossa hit the Water running
As Prada Pirelli Luna Rossa announced their America’s Cup World Series race in Sardinia next year the team have also revealed their new prototype and taken their first sailing steps as they prepare for the first America’s Cup to feature foiling monohulls which will begin with world series racing in Sardinia next April.

Seguin dominates the Para Worlds
Disability sailing may have lost its Paralympic spot but the sport remains in good shape with almost 100 sailors from 28 nations taking part in 60 races across the 4 classes at the Para World Championship in Puerto Sherry, Spain. Star of the show was French 2.4m sailor Damien Seguin who was looking to add gold to his silver and bronze medals from previous World Championships.

Next month, a record-breaking Fastnet, Sail GP in Cowes, and a report from the Cascais 52 Super Series.