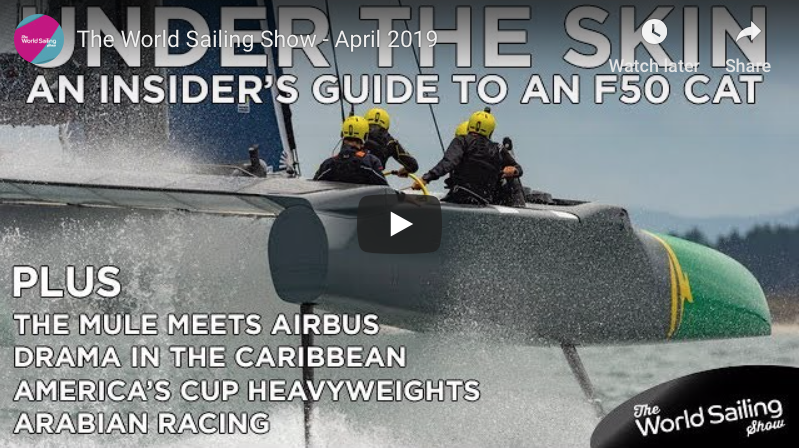 IN BRIEF
We’re all about speed this month. From Tom Slingsby’s guided tour of his teams’ F50, to the drama that proceeded another record breaking run around the Caribbean 600.
We also find out how aircraft giants Airbus are helping American Magic to develop their trial horse, the Mule as their America’s Cup campaign continues to take shape.
Plus, we head to Oman for the EFG Sailing Arabia The Tour, an event that has changed gear and upped its game after the organisers swapped monohulls for the sprightly Diam 24 tris.

FEATURES
Slingsby’s insider guide to the F50
Tom Slingsby’s home team stamped their authority all over the inaugural SailGP event in Sydney last month. While their opening race was a poor one for the local team and event favourites, the frustration acted as a catalyst for an impressive run of results from there on in.
But it’s easy to underestimate how complex these new boats are and how easy it is to trip up and sail one slowly. Team Australia’s skipper and helmsman Tom Slingsby provides a detailed tour of the new foiling beasts which reveals how far the high performance game has moved on. Previously such a detailed tour would have been impossible as teams guarded their secret work. But now, the one design nature of these advanced and complex cutting edge machines means that there is nothing to hide and everything to show.

Crash & burn in the Caribbean 600
The annual 600 mile offshore race around 11 Caribbean islands started with drama before the race had even started when one of the favourites, the MOD70 Argo which was stacked with a rock star crew, capsized during training. As a result, their race started early as they struggled to make the start.
For the rest of the 76 boat fleet, this year’s race was another breezy one with private battles aplenty running alongside those gunning for the big trophies.

The American Mule meets Airbus
When the Mule flew, heads turned as American Magic launched their trial horse for the next America’s Cup.
Now, the team has announced another big step with news of a new partner who are already experts in flight, Airbus.
So what do the aviation giants bring to this American Cup campaign?

America’s Cup technical
Since the radical design for the next America’s Cup was revealed there have been plenty of technical hurdles, not least the mechanism for the giant swinging arms and their foiling attachment.
We take a look at how the hydraulic heart of the new machines will work.

EFG Sailing Arabia The Tour
Last year’s move to a fleet of ten Diam 24 trimarans provided some spectacular racing. Set along Oman’s stunning 2,000mile coastline, this year saw the route reversed as the fleet started in Muscat to work their way south via a series of coastal and inshore races to the finish in Salalah.
The opening race delivered a punchy curtain raiser to the 2019 event delivering three different winners in the opening races, a clue to the intensity of the competition that was to come over the next two weeks.