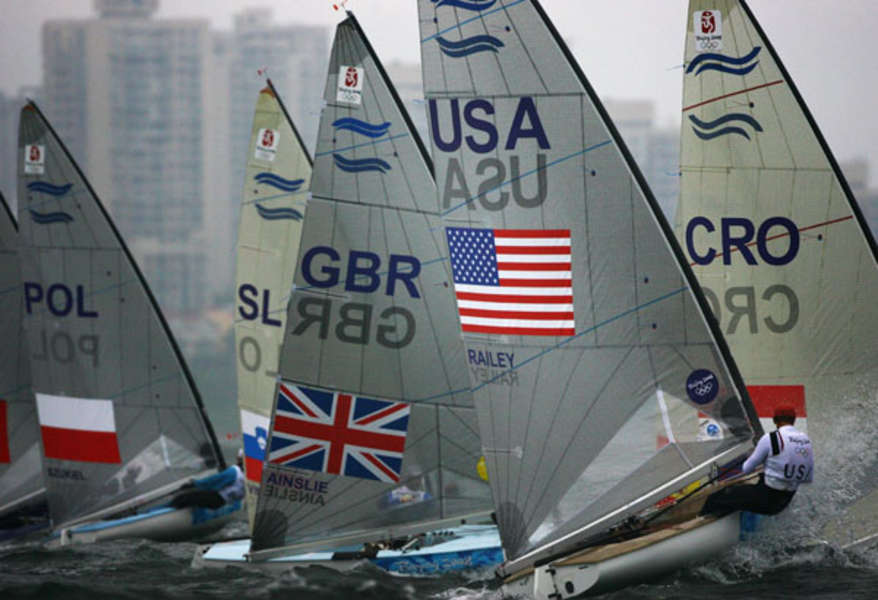 In this second article based on our exclusive interview with World Sailing president Kim Andersen we discuss sailing’s relationship with the International Olympic Committee and the demise of the Finn class as an Olympic boat after Tokyo 2020.

With the World Sailing AGM vote in Sarasota, Florida going in favour of the introduction of a mixed-gender, two-person, offshore class for the Tokyo 2024 Olympic Games the new slate of classes now looks like this:

As well as the mixed offshore event the new line-up also features another newcomer in the form of the mixed kite event. However the thing causing the most unrest in the sailing world was the exit of the men’s singlehanded event – i.e. the Finn, a stalwart of Olympic sailing since its introduction at the 1952 Games in Helsinki, Finland.

What then were Andersen’s thoughts on the exit of the Finn class after more than sixty years of Olympic involvement?

“I think most people who say they dislike this submission do so because they dislike the fact that one class is going out of the Olympics,” Andersen told us. “But I think you have to look at the reasons behind the decision rather than the consequences.

“Unfortunately there has been some consequences for the Finn Class from what we have decided. I don’t have anything against the Finn – I think it’s a great boat and it has been part of our Olympic DNA for a long time and it has done a great job.

“It wasn’t a decision to get rid of the Finn but a consequence of the decision we made is that, that is the case.”

One aspect of the decision-making process in Sarasota a few weeks ago that does not seem to sit well with people is the last second re-submission of the new offshore event on the eve the conference, after it had been voted out in favour of a mixed one-person dinghy event at the mid-year World Sailing meeting in May.

Asked to comment on how that situation had arisen Andersen gave this explanation:

“In May there was a submission that won the voting and that submission included a mixed one-person event,” he said.

“Let’s face it that submission was mainly targeted at maintaining the existing equipment in the Olympic Games and when the submitter was asked to speak about it, they were not really sure how we would implement this mixed event.

“But anyway – due to a lot of politics and a lot of lobbying – this submission was chosen. Between then and the conference in November I travelled a lot and spoke to a lot of MNAs [Ed: member national authorities – think RYA, US Sailing, etc.] and I also received a lot of input in my email inbox.

“Out of it all I got more questions about this mixed one-person event than I got answers.

“Added to this the Events committee and the Equipment committees could not come up with an answer to the question of what equipment to use for a mixed one-person event.

“While many of the MNAs had good alternative solutions many others told us they didn’t know how they were supposed to plan for this event and asked the Council to show them some guidance.

“All this is why the board made a conscious and well-founded decision to make a late submission proposing to change one out of the ten events agreed in May to make sure we can show an event that we think is well supported worldwide – one that is not equipment driven for the qualifiers but would use supplied equipment for the Olympics.

“We believed the offshore event showcased our sport well and added to the presentation of sailing at the Olympics.”

Having secured the necessary votes for the new-look Olympic sailing slate with kiting and offshore sailing, what now was Andersen’s level of confidence in the IOC accepting it unchanged?

“There has been a lot of talk from people saying that the IOC is the one who is demanding things of sailing and that’s why we need gender equity and mixed sailing and various other things,” Andersen said.

“I have been pretty consistent in what I have been saying ever since we started this process – in that the IOC is not telling us what to do. Rather I believe that we should tell the IOC how to conduct our sport and then take their guidance when it comes to their Agenda 2020. If that fits our agenda then I think we should adopt it.

Moreover Andersen was bullish about the positive impact of the changes brought about this year, which he believed positioned sailing well in comparison to other Olympic sports.

“The outcome we have now from the decisions made in May and November is that we have full gender equity of athletes and of events for 2024,” he said. “We have increased our mixed sailing from one to three events. And now we have the kite and offshore events showing a much broader picture of our extremely diverse sport.

“We believe by adding these two events to our Olympic slate of 10 events in total that the audience for sailing in general will increase. We can already see from all of the media stats that we have built up from our existing events that we are increasing media-wise.

“That’s important because to be a part of the Olympics you have to bring something to the party – and I think we are bringing a lot with this new slate.

Also we should remember that when we originally proposed two showcase events – kites and an offshore event – for this coming Olympics in Tokyo in 2020 the IOC were pretty excited about what we were presenting. However for a variety of other reasons there wasn’t room on the slate for that Olympic cycle at that point.

“I have no doubt that when we present these events – backed by good reasoning and supported as they were by 79 per cent of the Council vote and 78 percent of the votes in the AGM – then the IOC will respect our decisions. But then we obviously need to ensure that our events are structured and conducted in a way that is financially viable and we are not adding cost.”

“I think that if we as sailors are happy with that view then we are going to make it happen,” Andersen concluded.

Read the first article based on our exclusive interview with World Sailing president Kim Andersen here.