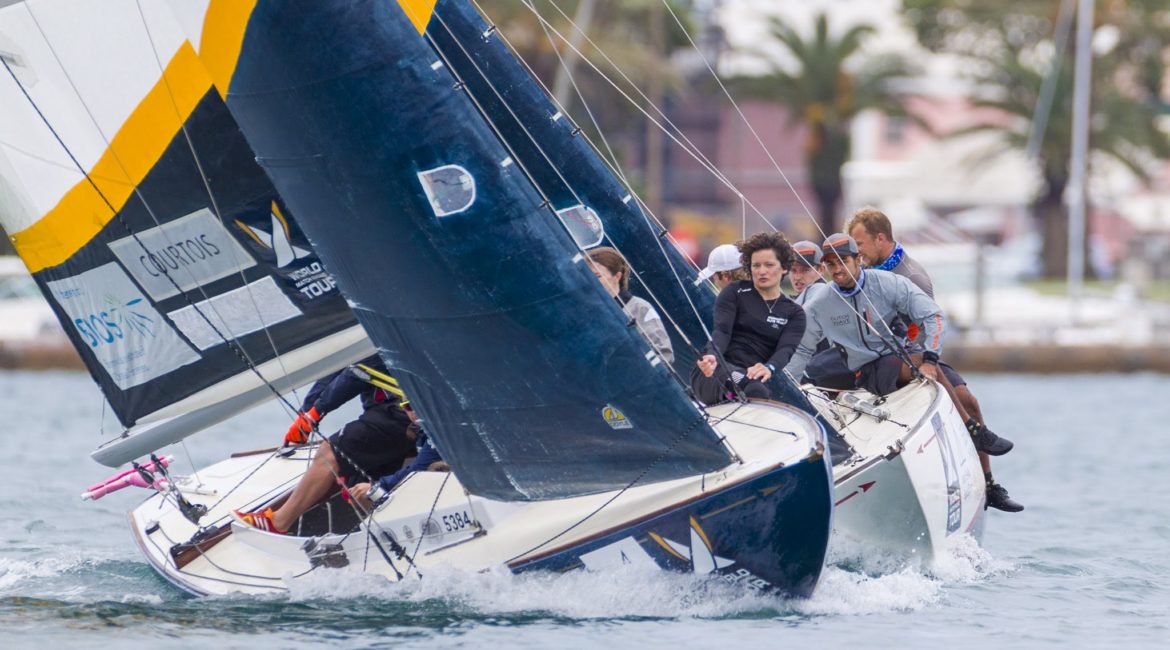 As Phil Robertson’s China One Ningbo and Torvar Mirsky’s Mirsky Racing Team streaked out to 4-0 leads in their respective groups at the 70th Bermuda Gold Cup and 2020 Open Match Racing World Championship, it’s hard to believe all of the skippers, including those two, who talked of being rusty coming into this regatta.

There’s no doubting that many in the fleet haven’t sailed much over the past eight months due to the coronavirus pandemic. There’s also no disputing the fact that many haven’t match raced monohulls in 12 to 18 months; multihulls have been ubiquitous on the World Match Racing Tour for a few years now. It’s just hard to believe them when they say they’re rusty.

The 16 crews treated spectators to classic match racing action today with dial-downs, luffing matches, come-from-behind victories and plenty of penalty requests to keep the on-water umpires jumping. Don’t forget, they had a long layoff as well.

“It was good racing, there was plenty of close stuff,” said Craig Mitchell, the chief umpire. “No one was being stupid out there, but we handed out 13 penalties and 13 green flags. We probably could’ve handed out a few more penalties, but it’s hard to say the sailors were rusty after watching today’s action.”

The conditions on Day 1 of the week-long regatta aided and abetted the sailors in their hyperactive tactics. A south/south-southwesterly breeze blew across Hamilton Harbour between 8 and 16 knots. In that wind direction, 2 knots more pressure can mean 10 degrees of favorable heading and turn a close cross into a comfortable margin.

Included in those wins were some dial downs and penalties against Östling and a come-from-behind win versus Monnin. Although Robertson hasn’t raced in Bermuda since 2015, you’d be pressed to say he was rusty. Even if he did.

“It’s not a bad start. We’re very rusty but a bit of it came back,” said Robertson (left). “We managed to settle down after the first race or two and get into a nice groove. It was a very Bermuda-style day with puffy and shifty conditions, so it was heads out of the boat. We were just getting puffs out of everywhere. We’re not as good as what we were in the past here, but it’s all about ramping it up so good learnings today.”

“We were happy to kick start our regatta and get a few wins,” said Mirsky. “With these regattas you need to build up to the final series and get some confidence as a team, and we’re sailing well. We were over the line in one of them but managed to claw back, so that’s a good sign. And we took down an America’s Cup team that’s meant to be in Auckland training, so we feel good about that as well.

“Everyone hasn’t sailed much and also hasn’t done much monohull match racing, so there are lots of questions,” Mirsky continued. “The teams are reminding themselves of how they used to do things. We’re happy that the things we remembered are good enough to get a few wins at the start of the regatta.”

In Group A, American Chris Poole’s Riptide Racing Team is second with a 3-1 record, followed by Sweden’s Johnie Berntsson and his eponymous Berntsson Racing Team, also at 3-1.

Poole won a cracker of a match between the two in Flight 1. Halfway up the first beat they had a dial-down encounter with Poole on starboard that the umpires green-flagged. At the windward mark Berntsson earned a red flag penalty for overtaking from behind and rounding inside Poole, which the umpires red-flagged because Berntsson gained control of the match. Poole regained the lead after Berntsson’s penalty turn and held on for a close win and, possibly, an important tie-break advantage down the road.

“Everyone’s really coming out swinging,” said Poole. “It’s a bit of like riding a bike. We all know the game and we’ve done it for years. We’re all just trying to minimize our mistakes. The pressure of the Worlds is putting the onus on the skippers for being on top of their sailing, and that’s leading to aggressive races with not too many slip ups.”

In Group B Ian Williams’s Team GAC Pindar is second at 3-1 while Jeppe Borch’s Borch Racing Team is third, also at 3-1. Williams holds the tiebreaker after a come-from-behind victory in Flight 3. Williams led around the first lap but Borch overtook up the second beat by being to the left. At the windward mark the second time, Williams tagged successive penalties on Borch for failing to keep clear as a windward yacht, and that was enough to give him the victory.

“I’m not sure whether he didn’t spot us or wasn’t sure about the rules, but clearly it was windward-leeward and that was a penalty,” said Williams, the reigning event champion and six-time Open Worlds champion. “After the first penalty he might’ve gotten flustered and managed to do the same again. Two penalties make it easier for us.”