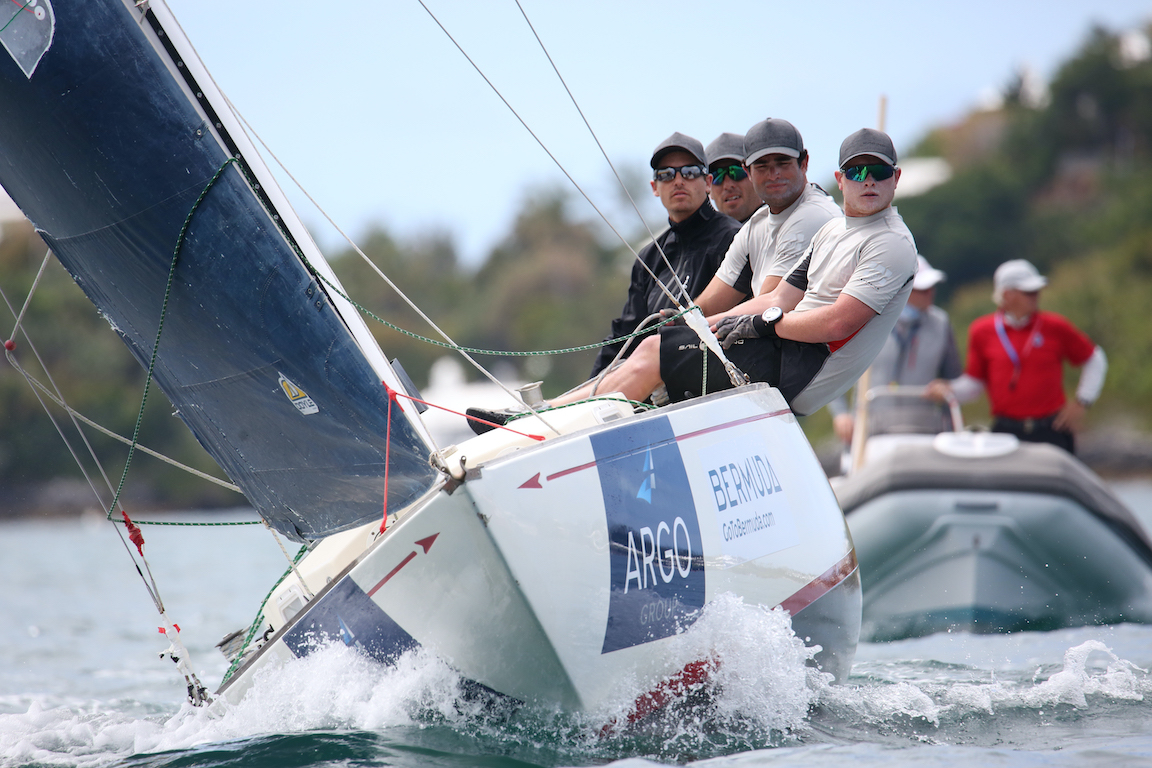 Sweden’s Johnie Berntsson, Taylor Canfield of the U.S., Australian Torvar Mirsky and Ian Williams of the U.K. have all won the King Edward VII Gold Cup, awarded to the winner of the Bermuda Gold Cup, while Canfield, Mirsky, Williams and New Zealander Phil Robertson of Sweden have all won the Open World Championship. The fleet’s credentials are further boosted by Sweden’s Anna Östling, a two-time champion of the Women’s Match Racing World Championship.

The six skippers are among the 16 entrants for the dual regatta, presented by Argo Group for the benefit of the Bermuda Institute of Ocean Sciences (BIOS). While there is an abundance of experience in the fleet (11 of the returning skippers account for 63 cumulative appearances), the Bermuda Gold Cup is keeping to its mission of providing up-and-coming teams a chance to compete against the best. To that end four skippers are aged 22 to 26 years old while two very accomplished women’s crews add intrigue to the regatta that will again be raced on Hamilton Harbour in the International One-Design (IOD) sloop.

They’re all chasing the oldest trophy awarded for competition involving one-design yachts, the King Edward VII Gold Cup, and for winning the Worlds, the sterling silver World Match Racing Tour trophy that was made by Garrard & Co., the royal jeweler that crafted the America’s Cup. The winner will also be awarded $30,000 of the $100,000 prize purse.

“The lure of winning two esteemed championships in one fell swoop has led to a fantastic fleet that is both competitive and accomplished,” said Leatrice Oatley, chairperson of the Bermuda Gold Cup. “We’re happy to welcome those who’ve been to Bermuda before and look forward to welcoming the new crews. Bermuda and the Royal Bermuda Yacht Club are ready to share the hospitality that is a hallmark of the regatta, just remember to bring a mask.” 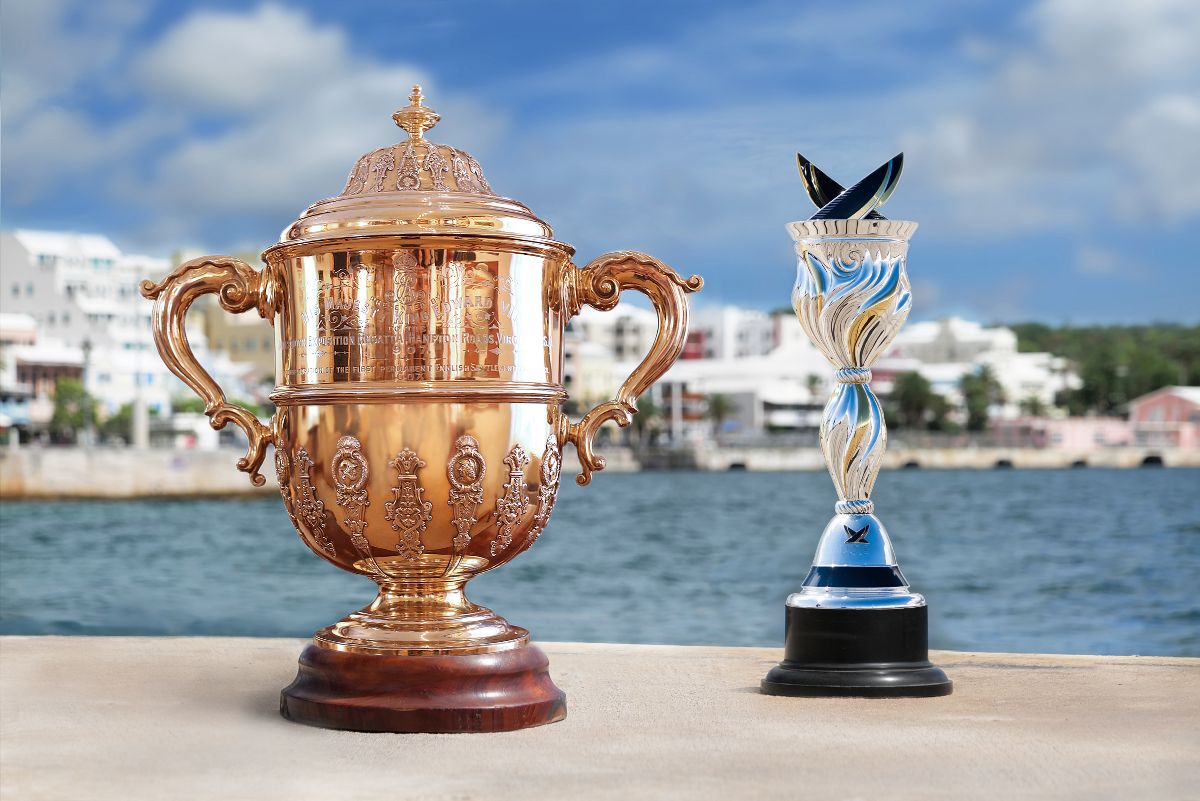 The Bermuda Gold Cup is presented by Argo Group in benefit of BIOS, an independent US non-profit scientific research and educational organisation based in Bermuda. For over 100 years BIOS-based researchers and visiting scientists have worked to explore the ocean and address important local and global environmental issues, including climate change, coral reef resilience, and environmental monitoring. As a Bermuda registered charity, BIOS is committed to providing local students with educational programs that build a foundation for an appreciation of Bermuda’s marine environment, as well as future careers in science, technology, engineering and mathematics (STEM) subjects.

Youth gets a shout out with 22-year-old Jeppe Borch of Denmark, the World No. 11-ranked skipper, 23-year-old Matthew Whitfield of the U.K., World No. 21, and 25-year-old Jelmer van Beek of the Netherlands, World No. 10. All three are making their Bermuda Gold Cup debuts.

Chris Poole of the U.S., World No. 7, is the top-ranked American competing, Nicklas Dackhammar, World No. 14, returns for his fourth Bermuda Gold Cup representing Sweden, and Lance Fraser, World No. 38, returns to the island he grew up on representing Canada. Mati Sepp of Estonia, World No. 5, will be making his first appearance.

The four past winners of the Bermuda Gold Cup—Berntsson, Canfield, Mirsky and Williams (the reigning champion)—account for seven championships in total since 2006. While the four past winners of the Open World Championship—Canfield, Mirsky, Robertson (the reigning champion) and Williams—account for 10 championships, including each edition since 2011. A win for Williams would be a record-setting seventh Open Match Racing World Championship title.

“The Bermuda Gold Cup is definitely one of my favourite events,” said Canfield, who grew up on St. Thomas, USVI. “It gives me the sense of growing up in the islands, sort of tropical with a punchy breeze. I love the shifty racing on Hamilton Harbour, it caters to my style of sailing. I’m looking forward to going back. There are a lot of friends and people down there that I consider family from doing the event for so long. I’m most excited about sailing a match racing event.”

Mirsky, as well, is excited to get back to match racing. Like many of the top sailors in the fleet he’s been racing multihulls on the World Match Racing Tour the past few years. Last year’s Open Match Racing World Championship was sailed in multihulls. He says getting back into a displacement monohull such as the IOD allows for more finite tactics than a multihull.

“For match racing tactics there are more boat-on-boat decisions with displacement monohulls. It’s easier for people watching to understand our decisions or to see who’s ahead,” said Mirsky. “With catamarans, I don’t think we’re making as many decisions as we can. In catamarans, we’re short on resources like man power to handle the boat and get the maximum speed. You compromise your tactics to go fast and you’re missing out on performance because you’re shorthanded. In the monohull you’re working on one percent gains, tiny details and a lot more boat-on-boat stuff. It amplifies the risk-reward game we’re always playing. Monohull tactics exemplify match racing a bit more.”

One newcomer who should have familiarity with the gusty and shifty racecourse on Hamilton Harbour is Whitfield, the 23-year-old from the U.K. The World No. 21-ranked skipper competed in the 2011 RenaissanceRe Junior Gold Cup, and being invited to the Bermuda Gold Cup is a dream come true.

“I was 14 years old when I raced the Junior Gold Cup, so I got to see the Gold Cup in person,” Whitfield said. “Everyone knows the Bermuda Gold Cup is among the biggest events in the world of sailing, and I still can’t quite believe that we’re going to compete. Having done the Junior Gold Cup I know what the racecourse is about: gusty, shifty and all strength.”

The King Edward VII Trophy, awarded to the winner of the Bermuda Gold Cup, is the oldest trophy in the world for competition involving one-design yachts. First presented in 1907 by King Edward VII at the Tri-Centenary Regatta at Jamestown, Va., honouring the 300th anniversary of the first permanent colony in America, the trophy is the only King’s Cup ever to be offered for competition in the United States which could be won outright.