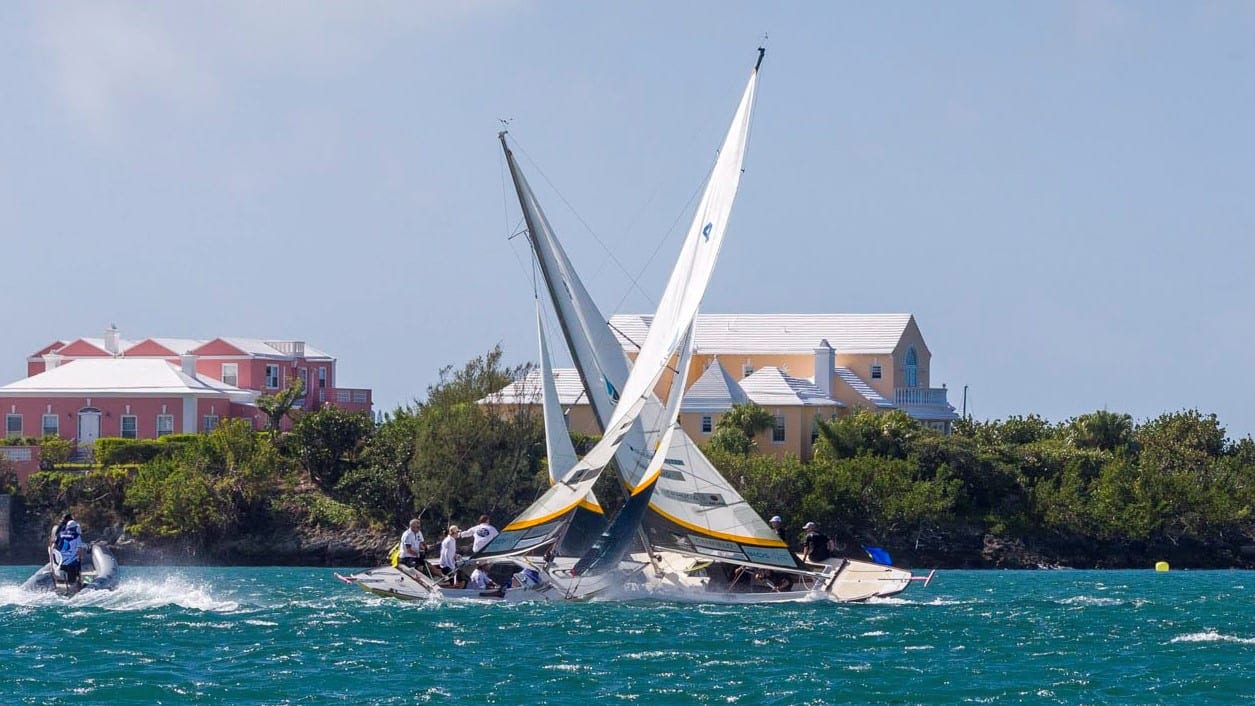 I would like to start by thanking and congratulating the Royal Bermuda Yacht Club and the Government of Bermuda for their extraordinary efforts in making this event happen in the current circumstances.

Sport at an international level involving participants from multiple countries and continents has been incredibly difficult to achieve since the start of the pandemic, and it appears to me that Bermuda, with its strong but friendly testing protocols, is almost the only place in the World that could make an event like this happen during these unprecedented times.

I also want to congratulate Taylor Canfield and his Stars and Stripes team for winning Taylor’s second match racing World Championship. It is a tough Championship to win once, but very few have been able to come back and win multiple titles.

There has been a lot of focus on one incident in the final where the competing boats collided, resulting in a further collision with a media boat; both boats and the media boat were damaged.

I will address that below, but on reflection, I do not believe that incident was the defining factor in the final. The reality is Team GAC Pindar led around mark one in all of the other three races and we were only able to convert that into one win.

The main passing opportunity on the race course was the first run and twice Taylor and his team were able to establish the smallest of overlaps into the favoured left bottom gate mark.

They were certainly sharper than us on those runs and in particular, their positioning was better than ours. Maybe having five people on board was an advantage for them (we were sailing with four as the rules stipulate an overall crew weight) or maybe their three close races with Phil Robertson in similar conditions that morning gave them that extra sharpness.

Or maybe they would have also beaten us without those factors. What is for sure is that we will learn from it and aim to come back stronger next year.

Back home, analysing the final, I counted six unforced errors that we made (including those two positioning errors). Under ordinary circumstances we would only expect to make one or two in a high pressure final.

I think much of that can simply be put down to a lack of match sharpness having not match raced since July 2020. Having said that, there is no excuse as all teams’ preparations have been very limited over the last few months and certainly the opposition made mistakes as well; ours turned out to be more costly.

Regarding the collision in the pre-start of race two, I do not have the words to accurately describe it here but many readers will have seen the video. In short, we were approaching an obstruction on port and Taylor was approaching on starboard. At some point he became overlapped inside us and we were required to give him room if able. The first thing to consider is who should the penalty fall on in the race. This was a very dynamic situation with fine judgement calls affecting a rather nuanced situation in the rules. The rights and wrongs of it flip depending on whether he was allowed to turn into us or not. Crucially the umpires agreed with him that he was allowed to do so and whilst I am not entirely convinced, I can certainly see how they could interpret it that way.

The more important point which is pertinent to the sport going forward though is the liability, both in terms of points deductions and loss of damage deposit, for the damage caused by the collision.

I feel strongly that Taylor’s obligation in this instance was to go straight or, if his judgment was different to mine and he thought we were not crossing ahead, to turn away from the collision and appeal to the umpires.

In penalising us for the damage element of the collision, the umpires ruled that the obligation was entirely on us to avoid the collision. This is not the first time I have been in a hearing about damage and almost always they go against the boat that was penalised in the incident. My view is that, in a sport where we are sailing borrowed boats, the incentives inherent in this rule need to be more targeted towards preventing collisions, rather than simply amplifying the call made by the umpires on the water.

In this instance, the call went Taylor’s way, and by ensuring there was a collision with damage he gained a points advantage in addition to the penalty awarded during the race.

Of course Team GAC Pindar were disappointed to come away from Bermuda without that elusive seventh World Title, particularly after coming so close. But against the global backdrop of health, social, and economic woes, we do feel extremely fortunate just to have been able to attend a competitive Match Racing World Championship, as well as three M32 European Series events this year (in which we won two and finished 2nd in the other).

Like many event logistics businesses, our operations team in Southampton have also felt the effect of the event downturn acutely; yet the diversity within our organisation and the encouraging recent news regarding potential COVID-19 vaccines allows us, and our industry, a more positive outlook for 2021.

We are hopeful that after what will likely be a slow start to the year we can get back to doing what we love on a more regular, and normalised, basis.