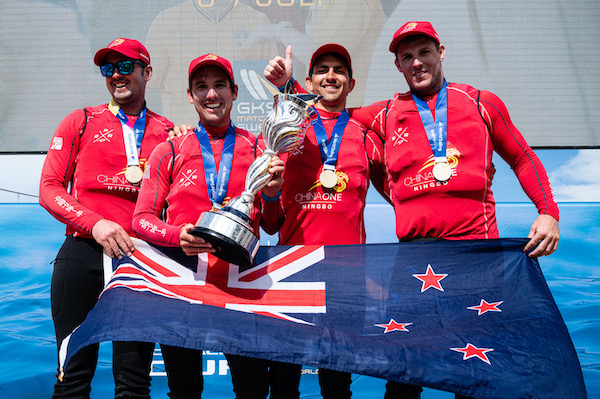 Two weeks after announcing that the Bermuda Gold Cup will be contested Oct. 26-30, the Royal Bermuda Yacht Club and World Match Racing Tour together announce today that the celebratory 70th event will also host the 2020 Open Match Racing World Championship as sanctioned by World Sailing.

After consulting with the Royal Bermuda Yacht Club Executive Committee and World Sailing, the World Match Racing Tour made the decision to elevate the Bermuda Gold Cup to the Open World Championship regatta for 2020.

“The Bermuda Gold Cup has always been a standard setter in the match racing arena and we’re thrilled to host the Worlds for a second time. The pandemic has made it a long year for everyone around the globe, and the hurricane we just endured was a cruel joke, but a competitive Gold Cup and world championship would be a great way to flip the script positive.”

“As the single World Championship event for the 2020 World Match Racing Tour, we are delighted to see the world’s best competitors have committed to sailing at the Bermuda Gold Cup,” said Alastair Fox, the Director of Events for World Sailing. “The event is renowned for its exceptional delivery and we are confident the 2020 Worlds will be a resounding success.”

The preliminary lineup includes the reigning World Champion, New Zealander Phil Robertson who currently lives in Gothenburg, Sweden. Robertson won the worlds in 2016 and 2019 and has been sailing multihulls predominantly the past few years. But having competed at the Bermuda Gold Cup five times previously, he’s well aware of the difficulty racing the International One-Design (IOD) sloop on Hamilton Harbour.

“Winning a World Championship event is never easy. You have to peak at the right time,” said the 33-year-old Robertson. “Winning a third championship will be very difficult, but I wouldn’t attend if I didn’t think my crew could put forth a winning performance. The IOD is about as far away as possible from my skill set right now, given all the multihull sailing I’ve been doing, but we’ll do all we can to hone in on mastering it.”

Spoiling to thwart his attempt are a few past world champions. Six-time champion Ian Williams (Lymington, England) will go for a record seventh title while the 2017 champion, Torvar Mirsky (Fremantle, Western Australia), aims to add a second title to his résumé. There’s also Anna Östling (Lerum, Sweden), a two-time winner of the Women’s Match Racing World Championship. If she were to succeed in Bermuda, she’d become the first woman to win both the Women’s and Open Match Racing World Championships.

“We are delighted to stage the Open Match Racing World Championship this year and I am very grateful to Royal Bermuda Yacht Club for their support in hosting the event,” said James Pleasance, Executive Director of the World Match Racing Tour. “Besides having past world champions in the competitive lineup, it’s fantastic to welcome Anna and her world-caliber crew to the event. It would be a wonderful story if she were to become the first woman to win the Open Worlds.”

This will be the second time that Bermuda hosts the Open Match Racing World Championship. In 1991, the regatta was held on Hamilton Harbour the week after the Bermuda Gold Cup. Amid deteriorating conditions due to a tropical storm, New Zealander Chris Dickson defeated American Peter Isler. The final was sailed in 30- to 35-knot winds which forced the two crews to double-reefed mainsails and storm jibs on the Hunter 35 sailboats.

The winner of the Bermuda Gold Cup will receive the King Edward VII Gold Cup, the oldest trophy in the world for competition involving one-design yachts, as well as the $30,000 winner’s check. For winning the World Championship the skipper will be presented the sterling silver World Match Racing Tour Trophy that was made by Garrard & Co., the royal jewellers who crafted the America’s Cup trophy in 1851.