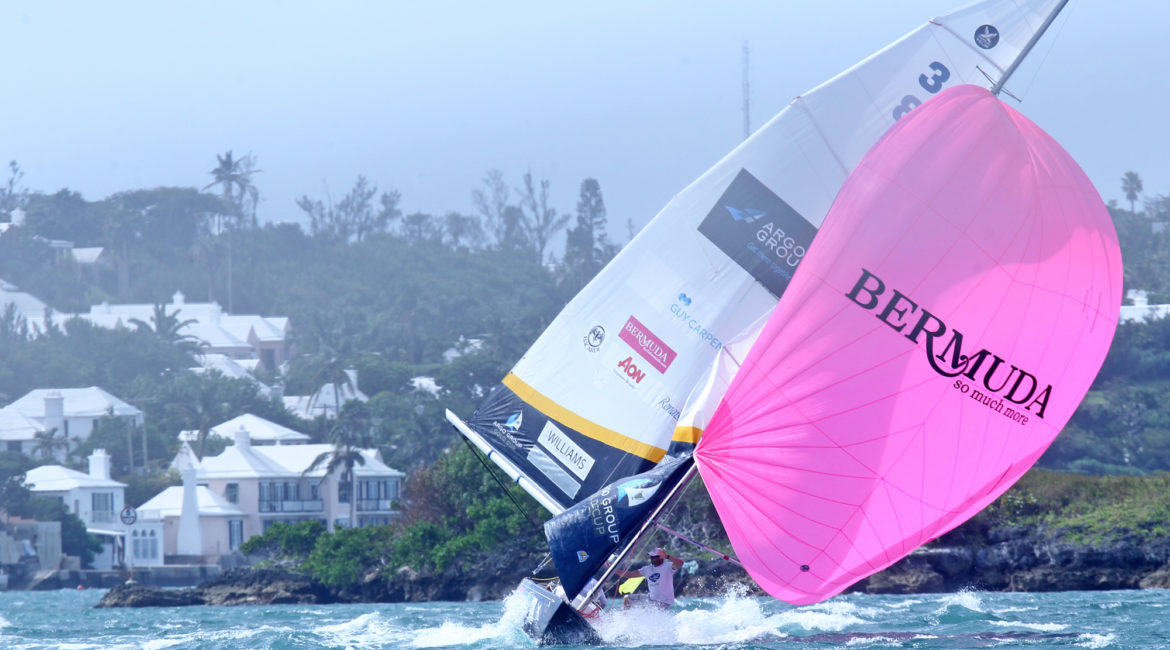 After months of careful consideration the Royal Bermuda Yacht Club has confirmed that the 70th Bermuda Gold Cup for the King Edward VII trophy will take place Oct. 26-30 on Hamilton Harbour, with a full 16-team lineup expected.

Originally scheduled in May the Bermuda Gold Cup, presented by Argo Group for the benefit of the Bermuda Institute of Ocean Sciences (BIOS) and an event of the World Match Racing Tour, was postponed in March due to the outbreak of the novel coronavirus, COVID-19, which closed Bermuda’s L.F. Wade International Airport to foreign visitors.

In late May the Royal Bermuda Yacht Club announced that the $100,000 match racing regatta was rescheduled to late October in the hope that the virus might be more manageable. At a meeting of the club’s Executive Committee last week event chairperson Leatrice Oatley recommended that the regatta go ahead and the committee confirmed: the Bermuda Gold Cup will be raced Oct. 26-30 barring any setbacks due to the coronavirus.

“We couldn’t be more pleased to make this announcement,” said Oatley, who’s also a Past Commodore of the Royal Bermuda Yacht Club. “It’s been a long, few months since we had to postpone the 70th Gold Cup and we’ve had many, many meetings about the viability of holding it in October. We’ve paid close attention to travel restrictions as well as quarantine and social distancing guidelines around the world and in Bermuda in particular, and we feel that conditions have improved enough to allow us to host this regatta that everyone loves attending.”

The airport re-opened at the beginning of July and the Bermuda Government has initiated a robust testing and tracing program. Visitors to the 21-square-mile island must get tested before leaving home and then again upon arrival on the island, at which point they must quarantine at their island residence until the test results are returned, typically in 8 to 12 hours. Visitors must also complete a travel authorisation form and have proof of overseas medical insurance. (Detailed information on visiting Bermuda may be found at the Bermuda Tourism website.)

Bermuda’s efforts were recognised last week by a leading global tourism group. The World Travel & Tourism Council (WTTC) has designated Bermuda a “Safe Travels” destination under a program that recognises governments, destinations and companies around the world that have adopted health and hygiene standards that meet protocols recommended by the World Health Organisation and the Centres for Disease Control. The designation follows an application to the WTTC by the Bermuda Tourism Authority (BTA) and allows Bermuda the privilege of using the council’s “Safe Travels” stamp—a globally recognised seal.

Earlier this month, the Centres for Disease Control improved the island’s ranking to Level 2—making Bermuda one of only four places in the world assessed with a “moderate” COVID-19 risk level. And in the U.K., the Foreign & Commonwealth Office has allowed British residents returning from Bermuda to forego a 14-day quarantine imposed on U.K. travellers coming back from many other regions.

Oatley said that she has been in touch with all of the skippers who originally accepted invites to the planned May regatta. Nearly three-quarters of those skippers have said they will honour that commitment. The remaining are considering factors such as local quarantine rules and global travel hurdles in making their decision.

“We’re still planning a 16-team event,” said Oatley, “and to date we’ve got about 10 to 12 confirmations. It’s up to the skipper and crew to decide if they feel it’s safe enough to travel. A couple of the skippers have expressed concerns that it’s too difficult to travel from where they are located and we would miss them if they don’t attend, but this is a professional sporting event. The PGA Tour plans to hold its tournament in Bermuda in late October as well and we feel that is good precedent for hosting our regatta.”

Included on the preliminary entrant list is the reigning event champion Ian Williams (Lymington, England), who won his second Bermuda Gold Cup title last year over Johnie Berntsson (Stenungsund, Sweden). The 43-year-old father of two said that he considered many factors in determining that it was safe to travel to Bermuda.

“I think it’s important to assess the risk in two ways,” said Williams, whose two children are aged 2 and 5 years old. “There’s the immediate risk of catching the virus and passing it on to friends and family. My opinion is that the risk, while not zero, is low enough both in terms of the chances of catching the virus, and in terms of the likely impact if I do. As well as other risk mitigation, in particular we take extra precautions with my parents-in-law when I return from trips abroad.

“The other risk is the responsibility we all have to society to not be a conduit for the virus, which could contribute to community transmission,” Williams continued. “In that regard, I believe our main duty is to follow the rules set by the appropriate authorities. I’ve looked at Bermuda’s immigration protocols and am happy with the effort they’re undertaking, which appears to have been highly effective thus far.”

The King Edward VII Trophy, awarded to the winner of the Bermuda Gold Cup, is the oldest trophy in the world for competition involving one-design yachts. First presented in 1907 by King Edward VII at the Tri-Centenary Regatta at Jamestown, Va., honouring the 300th anniversary of the first permanent colony in America, the trophy is the only King’s Cup ever to be offered for competition in the United States which could be won outright.