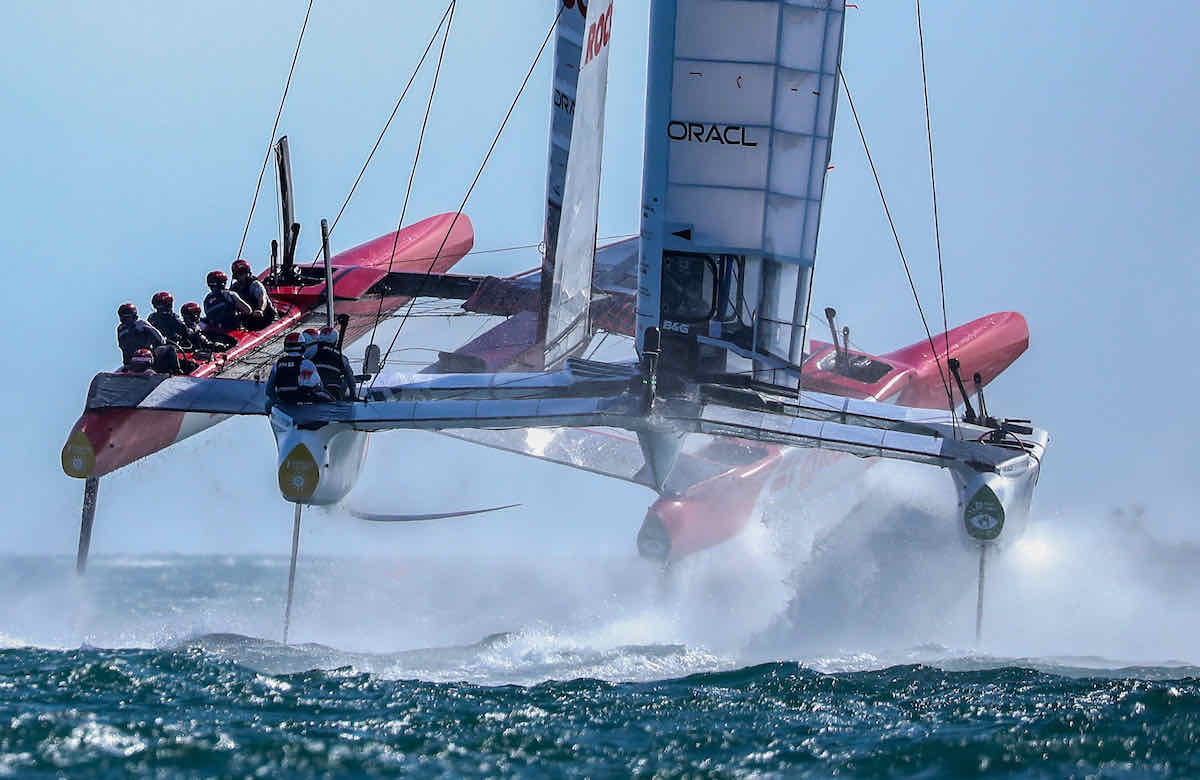 Finally, what the F50 sailors and fans have been waiting for – a properly windy day of racing at a SailGP event. Yacht Racing Life editor Justin Chisholm was breathless just watching the action from Cadiz, Spain on his iPad and brings us this report.

Blood and sand, what a huge day out on the water Sunday turned out to be for the SailGP crews racing at the international circuit’s sixth event of the year taking place in Cadiz, Spain this weekend.

Conditions were always forecast to be tricky, with the plus 20-knot easterly wind filtered by Cadiz’s maze of city streets and buildings before arriving on the racecourse in a series of gunshot gusts and unpredictable shifts.

Despite the big breeze the race organisers nevertheless called for the teams to use larger of the two wing sail options – 24 metres, rather than 18 metres.

The teams were allowed out out to the racecourse an hour before race time to give them time to get acclimatised and the conditions. Unfortunately for the hometown crowds the Spanish crew were the first to fall foul of the conditions when a high-speed nosedive was and inevitable capsize destroyed the top third of their wing.

After almost capsizing themselves on the way out of the harbour Tom Slingsby’s Australian team took some time to run through their capsize drill and check their personal spare air bottles.

“It’s survival out here,” Slingsby reported. “It’s not so much the amount of wind, it’s just the position of the racecourse makes it really puffy. The water is pretty flat, that’s manageable, but the bullets we get out here are pretty extreme. You go from light winds to a lot of wind very quickly and it’s very hard to predict.”

The crews were clearly on the ragged edge of control as they scorched across the first reach of the opening race of the day. The boats were travelling at close to 45 knots as they arrived in close formation at the first turning mark – so this was a particularly bad time for the control systems on the Australian F50 to shut down.

I am still not sure exactly what caused this to happen. There was talk of an accidental press of the ‘E-Stop button’ – who knew the F50s had one of those? – but the result was that Slingsby’s boat abruptly slewed to leeward just as it reached the turning mark, putting it directly in the path of the Danish Rockwool crew led by Nicolai Sehested.

I have worked a lot with Nicolai and I know full well what an unflappable character he is – but how he managed to avoid mowing down the Australians is a complete mystery.

Somehow, with less than a split second to react, the quick-thinking Dane threw his boat into a high-speed swerve that enabled him to thread the needle between Slingsby’s boat and the turning mark.

It was a heart-stopping moment to witness – even remotely – but seconds later it was all forgotten as the racing continued unabated and the Danes led the fleet down the first run towards the leeward gate at speeds in the mid 40 knots.

There was more drama at the bottom of the course as Sehested pulled off a daring cross, squeaking ahead of Nathan Outteridge’s Japanese crew – who were closing at 32-knots – to career around the left-hand gate mark just about in control.

As things calmed down a little on the first upwind leg it was Peter Burling’s Kiwi crew who found the fastest mode to move past Sehested and Outteridge and round the windward gate well ahead.

Burling and his sailing partner Blair Tuke are down on time on the F50s compared with their rivals having missed several events this year while on Olympic duty in their 49er and have failed to make as big an impression on the SailGP circuit as was expected.

However, based on their slick performance in this race – which ended with them taking their first win of the season – the double America’s Cup-winning duo look to be on the cusp of making a move up the leader board.

There was an absence of near capsizes and collisions in the second race of the day, the racing action was equally thrilling nevertheless with the Japanese, British, French and Australian crews engaged throughout in a high-speed dogfight for the lead.

Hats off to Quentin Delapierre who was sailing his first SailGP event at the helm of the French F50 after being drafted in to replace Billy Besson following a poor performance at the team’s home event in Saint Tropez.

Despite his rookie status the French Olympian was clearly not intimidated by the F50 or the windy conditions in Cadiz. When he found himself in the top three approaching the first windward mark of this final fleet race, he looked composed and assured as he flew the boat low and fast to put both Outteridge and British skipper Ben Ainslie under pressure.

Respect too goes to the eight female sailors racing for the first time this year as part of a mandate finally issued by the SailGP organisation.

All eight could be seen and heard contributing tactical information over the two days of racing in Cadiz. None more so than double Olympic gold medallist Hannah Mills, whose head was on a permanent swivel on the back of the British boat, particularly in the shifty, puffy conditions on Sunday.

There wasn’t much though Mills could do about the gust and subsequent nosedive the British crew endured shortly after the start of the event’s final three-way match race against the Jimmy Spithill’s American crew and Slingsby’s Australian squad.

The Brits had won the start and were off like a robber’s dog, reaching at 42 knots towards the first turn mark, when a new gust hit.

The urgent voice of wing trimmer Iain Jensen could be heard calling for the jib to be eased, but the boat had already begun to heel, and sheets of spray were carving up from the bow of the UK boat’s leeward hull as it nosedived into a spectacular capsize.

Ainslie’s crew were left clinging on avoid a long and potentially painful fall from the now highly elevated windward hull, while behind them Slingsby and Spithill both had to make emergency manoeuvres to avoid running them down.

Slingsby recovered best to regain control by the turn marker and head off down wind, while Spithill – who had been slowed more – wisely opted not to attempt a slow speed bear away and took the time needed to make the turn safely. That left Slingsby’s Aussie crew unchallenged to take the race win and claim overall victory in the Spanish event.

“Between myself steering the boat, Gooby [Iain Jensen] on the wing and Maso [Richard Mason] on the jib we just didn’t get the trim and the balance of the boat right and stuck the bow in and managed to pitchpole it,” Ainslie said afterwards. “That was massively frustrating as we’d done the hard bit with the start, it would have been a great race.”

Meanwhile, Mills was clearly undeterred by the capsize experience.

“I had the best weekend,” she said. “We are obviously disappointed with what happened with the final race, but it was awesome to be on the boat, contributing and learning. It’s great to have this opportunity.

“We were confident going into that last race and executed the start well. We were blasting along that first reach and unfortunately things got a bit out of whack and in those conditions there’s not much room for error.”

Having completed its five-stage European tour with a bang in Spain the SailGP circus now heads to the southern hemisphere for the penultimate event of season two in Sydney, Australia.

That’s a venue that could easily produce some big breeze action – and it it’s anything like day two in Cadiz, I can’t wait to tune in.