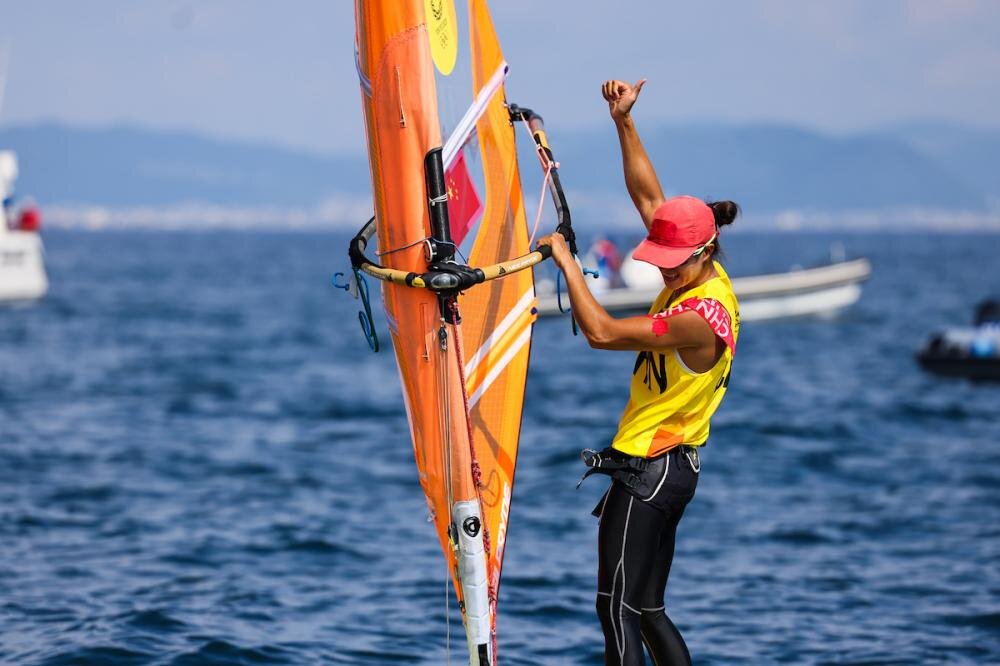 Andy Rice breaks down the thrills snd spills of today’s medal races for the Men’s and Women’s RS:X Windsurfer at the Tokyo 2020 Olympic regatta in Enoshima, Japan.

After a compelling three-way battle for the medals in the Women’s Windsurfing – RS:X  there followed perhaps one of the craziest, most unpredictable Medal Races of all time in the Men’s division.

As gold was all but assured for Kiran Badloe in the Men’s RS:X, silver and bronze was decided by some close calls.

Further out to sea, the final races of the opening series for the Men’s and Women’s Skiff have resulted in no runaway leaders. Instead, Monday will treat us to two nail-biting medal races to determine the outcome of the 49er and 49erFX.

With two qualifying races remaining, Great Britain holds a small lead in the Finn, and Italy continues to rule the Nacra 17.

Yunxiu Lu (CHN) has won gold in the Women’s RS:X after a tense three-way battle in the Medal Race.

With the Medal Race counting for double points, the gap between these three athletes was negligible. Lu went into the Medal Race wearing the gold bib, holding a four-point edge over Wilson, who was just two points in front of Picon.

Off the start line, it was very even between the three contenders but China was showing a small speed advantage in the light-wind, heavy-pumping conditions. Around the first mark however it was advantage France, just five seconds ahead of China with Great Britain some way behind.

At the bottom turning gate, with France and China opting for the right-hand side of the course, Britain in seventh broke left. By the top mark, Wilson had climbed up to second, and around final windward mark it was the top three contenders holding the top three places in the Medal Race. The balance of power swung back and forth on the final run to the finish, although gradually Picon worked out a lead to win the Medal Race.

Great Britain crossed in second, China third. That was enough to give the gold medal to Lu, silver to Picon and bronze to Wilson.

Lu had a good track record competing on the Olympic waters in 2019 but hadn’t been seen in international competition since then, due to the pandemic and travel restrictions. It turns out that her training based in China worked very well. “I have a very strong team that I’m thankful for and they helped me a lot. We have many local and national competitions which helped me train and get prepared for the Olympics. I want to thank my team for helping me to win this medal.”

All three athletes were delighted with their medals. There were no regrets from Picon or Wilson about missing the gold. “It’s just so hard to win an Olympic medal of any colour,” smiled Wilson. “I’m very happy with this one.”

Kiran Badloe (NED) won gold in the Men’s RS:X having all but sealed the Olympic title before the Medal Race.

Starting in silver medal position, Mattia Camboni (ITA) made a great start and launched into an early lead. But the Italian was unaware that he had broken the start too early and was disqualified, forced to leave the course. Next to be disqualified for the same reason was Piotr Myszka (POL) who was lying in bronze medal position as he was pulled off the course.

This cleared the way for Thomas Goyard (FRA) to cruise around the two lap course, the silver medal more or less secured for France. However, towards the end of the first lap, Goyard was also pulled out of the race for having broken the start line early. Now the distraught Frenchman had to sit out and watch from the sidelines, hoping that his points advantage going into the Medal Race would be sufficient to stay in the medals.

Meanwhile at the front of the fleet, Yoav Cohen (ISR) was sailing a clean race, probably unaware that he was in the bronze medal position.

A very precarious bronze, however, with Kun Bi (CHN) within striking distance due to starting on fewer points than Cohen before the Medal Race. Israel won the Medal Race, Badloe in second, Switzerland third. Some distance back but now up to fourth was China, enough for Bi to steal bronze from Cohen by a point.

“My worst start and the best ever,” exclaimed Bi afterwards, kicking himself at the time for a slow start off the line but grateful not to have been caught out by the recall flag like his medal rivals.

As for Goyard, despite his disqualification the Frenchman held on to silver by a single point from China.

Badloe’s gold medal makes it three Olympic RS:X Men’s titles in a row for the Netherlands. Badloe follows in the footsteps of his good friend and training partner Dorian van Rijsselberghe who took gold in London 2012 and Rio 2016.

“I just want to thank the people of Japan who made it possible for us to race at Tokyo 2020,” said Badloe. “This is a massive honour and I’m grateful we had the opportunity to compete at the Games.”

No one had it easy in the 49er today, but Pete Burling and Blair Tuke (NZL) did enough to move four points clear at the top of the scoreboard. Unlike Rio 2016 where the Kiwis locked up the gold before the medal race, they’ll be facing a scrap with the likes of Dylan Fletcher and Stu Bithell (GBR) in second place, equal on points with Diego Botin and Iago Marra (ESP).

Also, on equal points but 10 points back from bronze are the German and Danish teams who will be looking to spoil the podium party on Monday.

“I think we had a really tough day,” smiled Fletcher. “But I think everyone thought it was. And, you know, sometimes you expect a bit more of a tail-off at the end of the week of the Olympics but everyone was just on it and fighting for every point out there. So it was a bit of a relief to get through the day and be only a few points behind the reigning Olympic champions.”

Tina Lutz and Susann Beucke (GER) sailed around all the potholes and landmines on the 49erFX course to come through with scores of 7,3,3. This lifts the Germans to third overall, three points off the lead shared by two high-class teams.

The reigning World Champions from Spain, Tamara Echegoyen and Paula Barcelo, had a difficult day in the lighter breeze and have dropped to fourth overall, but still only seven points off the lead.

Like the 49er, this is going to be a tense Medal Race on Monday afternoon, as Beucke acknowledged today. “I think we went a bit too conservative into the regatta and kind of realised we have got to be very aggressive until the end. That’s what we did today. And I think that’s what we’re going to do in the medal race as well, because it’s all about coming home with the medal or nothing. It’s going to be exciting.”

Josh Junior (NZL) hauled himself back into medal consideration with the best day and scores of 1,4. He’s now in fifth place, two points behind Nicholas Heiner (NED).

Giles Scott (GBR) had another solid day despite the light and fickle breeze. His scores of 6,1 put the 2016 Olympic Champion ahead by six points, with two more races to run before the medal race.

Cardona commented, “I’m really happy to be in second right now. I didn’t have my best day today, but I’m sure tomorrow will be better. I think I came here really well prepared and I’m looking forward to a really nice battle.”

Jason Waterhouse and Lisa Darmanin (AUS) needed a good day to haul themselves back into medal contention and the Olympic silver medallists from Rio sailed to 1,5,4 and into fourth overall.

Eight points further ahead, thanks in part to a final race win today, are the reigning world champions from Great Britain, John Gimson and Anna Burnet.

Still hardly putting a foot wrong and coming through the day unspectacularly but unscathed, are the Italians Ruggero Tita and Caterina Banti who are becoming very attached to their yellow bibs.

Tita refused to be complacent, “I think it’s still a long way to go. We have three more races and a lot of points to come. Tomorrow we will be on Enoshima race course for three key races. And so a lot of water to pass under the boat yet.”

Sunday 1 August will see the Laser and Laser Radial fleets fight it out in their Medal Race.

The Finn and Nacra 17 will conclude their Opening Series and the Men’s and Women’s 470 will return to the water.

Enjoying a rest day ahead of their Medal Races are the 49er and 49erFX fleets.