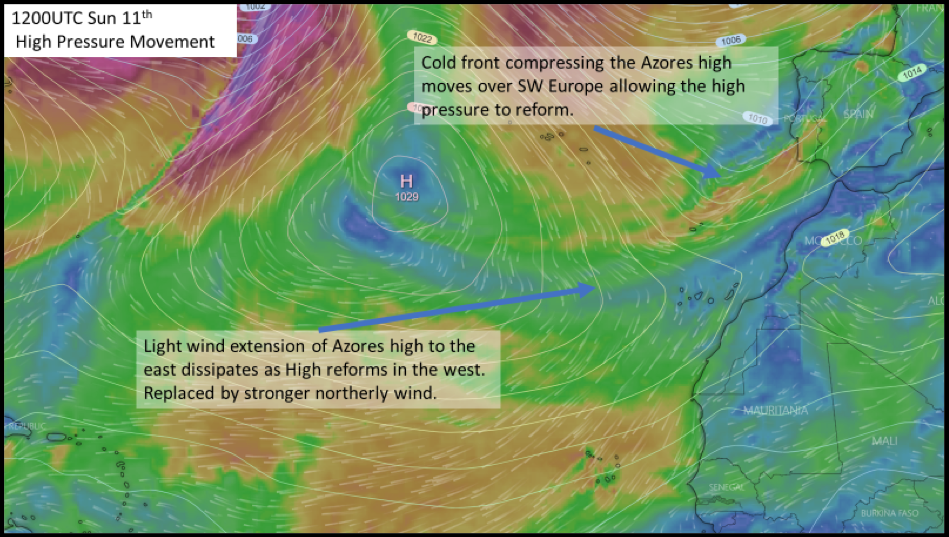 Ex-Volvo Ocean Race Race Experts weather analyst and solo skipper Will Harris takes another look the Route du Rhum fleet as the solo skippers complete their fifth day of racing on the way from St Malo, France to Guadeloupe in the Caribbean.

After fighting their way through several intense depressions over the past five days, the Route du Rhum fleet now face a very different challenge. They are approaching a patch of light wind extending from the Azores high pressure, blocking the route south into the trade winds.

The dive south to the other side of the Azores high is currently dominating both the Class 40 and IMOCA 60 fleets. Between Thursday afternoon and this morning, the position and shape of the high pressure has shifted significantly, now extending much further east towards Gibraltar. This movement has brought a large patch of light wind, effectively blocking the route south.

The three IMOCAs – including Paul Meilhat SMA, Alex Thompson Hugo Boss and Vincent Riou PRB – who managed to position themselves south of Madeira by the end of play Thursday afternoon, have escaped this high pressure block. We should see them extend some miles on the rest of the IMOCA 60 fleet over the next couple of days. They will sail in NE trade winds while the rest of the of the fleet are left in a sticky situation, either sailing south into the light winds or sailing a westerly course in upwind conditions.

Boris Hermann Team Malizia is testing out this westerly option, which although slower (sailing upwind), will mean he can sail a shorter course to the finish. Keep an eye on him over the next few days. He will try to cross the high pressure once it recedes back to the west on Sunday and we will see if his westerly route has paid off.

For the Class 40s, Yoann Richomme Veedol has taken a dominant lead over the fleet, with 60 nautical miles between him and second placed Phil Sharp Imerys, leading a pack of 10 Class 40s. However, this could all be set to change in the next 24 hours as Richomme will be the first to sail into the lighter winds of the Azores High, sitting just to the south of him. This would allow the following pack to compress, sailing in better wind.

Looking ahead, the forecast indicates that the cold front compressing the Azores high, causing its extension to the east, will dissipate by Saturday evening. This will allow the high pressure to reform in the west, replacing the light wind area around Madeira and the Canary Islands with stronger northerly winds. The timing of this is crucial for Richomme to maintain his strong lead as the sooner it happens the less time he will spend losing miles in the lighter wind.

At the very front of the fleet the remaining 2 Ultims are closely matching gybes. Francis Joyon IDEC is clinging onto the back of Francois Gabart Macif, willing him to make a tactical mistake (or damage something!).

Although they are in consistent 15-20knot NE trade winds gybing their way downwind, there are small gains to be made in playing the wind shifts that occur between night and day. With just over 1000 miles to the finish, time is running out for Joyon to try and take the lead from Gabart.

More about Will Harris here.