Skip to content
You are here
Home > LATEST > Why wait? 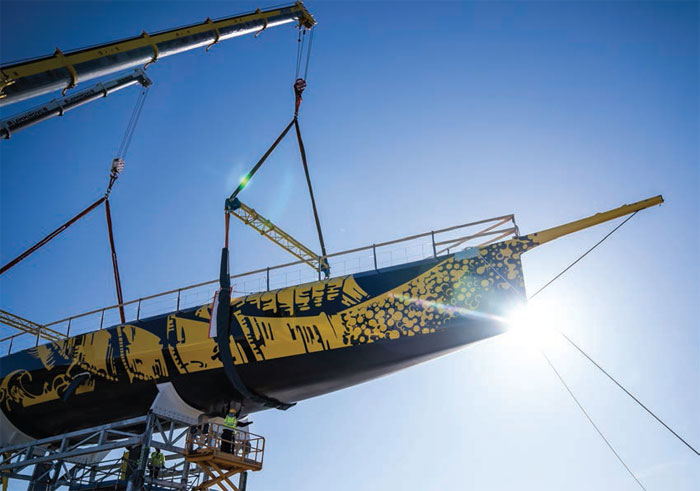 Even if you are using a hybrid mix of new and existing hardware there is no longer any reason why your data should not be delivered immediately on demand.

No one puts up with slow data connections in the home or office, why do so on board your yacht? In our modern era information flow is expected to be fast and readily available, so the team at A+T has taken the lead in launching Ethernet-based instrument systems.

‘The largest proportion of performance instrument systems installed from the 1990s to about 2007 used a serial bus called B&G Fastnet,’ says Hugh Agnew of A+T Instruments. ‘While fast enough for practical purposes it does have capacity limitations for the very largest systems and suffers in that any device on the network going down or a wiring fault pulls the whole display system down with it. This is often difficult to troubleshoot on a large yacht. It is also tied to a 12V supply which is not ideal.’

Many yachts are still using Fastnet and one of A+T’s specialities is helping diagnose problems and providing new compatible displays to upgrade these systems.

‘From the mid-2000s, another fourwire serial bus (also from the 1980s, the same era as Fastnet) called CANbus had been widely introduced with a format known as N2k (NMEA2000),’ explains Agnew. ‘Although faster than its predecessor, there is substantial network traffic overhead. It too is 12V and again suffers from one faulty device or wiring issue pulling everything down. CANbus was originally designed for rationalising wiring looms for vehicles and has the further drawbacks for larger yachts that cable lengths and wiring architecture are limited.’

As experts in improving system performance, A+T have been developing a full instrument and autopilot system based on Ethernet rather than Fastnet or CANbus connections between all displays, processors and sensors. Ethernet offers very high speed (an order of magnitude faster), cable runs of up to 100m in length and no restrictions on system architecture.

And even if longer cable lengths are needed in a system, fibre optic cable can be used or repeaters or switches inserted. Most importantly, each connection is completely isolated so a damaged wire, switch or device will not generally kill the whole system. Moreover, power can be provided locally where needed and 24v is normally recommended on A+T systems, a voltage compatible with most large yacht systems.

The heart of the A+T Ethernet system is the use of the ATP2 processor platform. The ATP2 is based on the well-proven architecture of its brother, the ATP1, which is now widely fitted on superyachts and raceboats. All sensors and displays are connected with remote Ethernet modules. Twenty-four volt or 12v power is injected as needed and due to the isolating qualities of Ethernet, need not be from the same source. A+T is producing two rugged switches for connection: the slimline switch is designed for connecting displays in mast brackets where space is at a premium and a robust waterproof connection is essential due to its full exposure to hosing seawater. Clear plastic covers on the general ruggedised switch helps with diagnostics should problems arise.

An example of a large performance yacht taking advantage of the A+T Ethernet system is the new ClubSwan 125 Skorpios, which has 18 displays running on an ATP processor, also integrated into a Faro processor. Bruno Zirilli, navigator on Skorpios, was the architect of this system and was very pleased with this on their recent record-breaking Rolex Fastnet Race win, setting a new monohull course record.

Autopilots too
The same Ethernet-based approach is also used in the autopilot that A+T is launching at METS 2021. A drive control unit is ideally located in the steering area and connected to the same “brain’” as above with a single Ethernet cable. This control unit has interfaces to drive the full range of proportional valves, rams and pumps found on large yachts. As with all A+T products, connections are also available to use legacy Fastnet-based displays for retrofit and to link to CANbus plotters and sensors.

Apart from A+T’s established high quality engineering, the outstanding feature of this autopilot is that it has a web interface for setting up and troubleshooting. This means the end of “poke and hope” as the full performance of the pilot can be watched internally and logged to send back to A+T engineers if needed.

An added benefit to a reliable Ethernet connection in autopilots is safety: should there be a MOB incident, reliability in the connections to get back to the site of the incident is crucial.

‘All yacht instrument connectivity will soon go to Ethernet, it has to,’ says Agnew. “We’re just taking the lead step in this evolutionary process.’