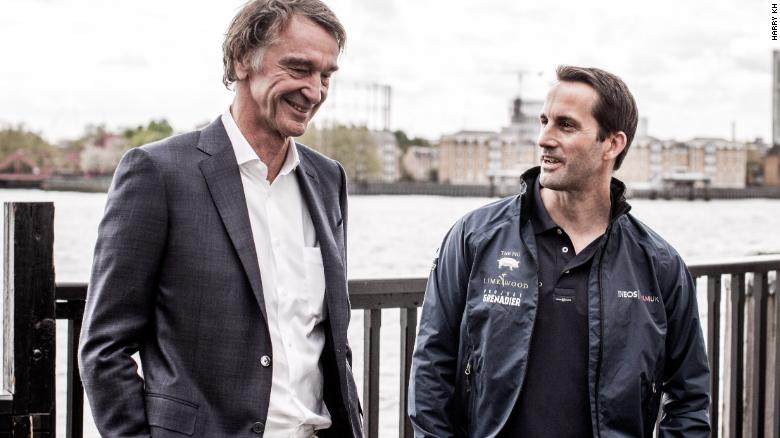 It started with a beer and ended with a $153 million investment aimed at finally breaking Britain’s America’s Cup duck.

After experiencing “the worst feeling of my career” a year ago last week, when his Land Rover BAR was knocked out of the 2017 Cup in Bermuda, Ben Ainslie had promised himself he would never experience that same sensation again.

Motivated by that failure, and after being introduced by a mutual friend, four-time Olympic champion Ainslie went for a beer with Jim Ratcliffe – who is the head of petrochemical company Ineos and was last month revealed as Britain’s richest man with an estimated wealth of $28 billion.

A $153m deal happened at lightning speed. Ainslie, who will lead a newly-branded Ineos Team UK team, told CNN: “I realized he’d been successful in business but, at the time of meeting, I wasn’t quite aware he was Britain’s richest man at that point!

“But I’d read about his exploits as an adventurer going to both Poles and taking part in crazy full-on marathons across deserts. I knew he had an interest in sailing so we got together for a chat and that got to talking about the America’s Cup.

“Jim got back to me the next day, was really excited about the challenge and wanted to get involved.”
And discussions quickly translated to actions. As Ainslie put it, “Ineos has ventures all over the world so, when an opportunity like that comes up, you have to grab it quickly.”

‘It’s all about winning’

Ineos, one Britain’s largest privately owned company and one of the world’s top 10 petrochemicals firms, was founded by Ratcliffe 20 years ago.

Ainslie is appreciative of all the help Mills and Dunstone have provided in the past. But he doesn’t apologize for making the change he believes is required for Britain to have any hope of winning the Auld Mug for the first time since the event’s inception on British waters in 1851.

“With the challenges we were facing, we were talking about bigger budgets for a winning strategy,” he said.

“Those guys [the past backers] understand that and, at the end of the day, they understand the need to go down this route as from the outset the goal has always been the same… to win the America’s Cup. They’ve been very good about it.”

Ainslie knows teaming up with Ineos gives Britain its best chance of winning the Cup when it takes place in New Zealand, which beat Land Rover BAR in the semifinals on its way to victory in the 2017 competition.

“I’m not going to say we’re going to win the Cup but now we have all the elements in place,” said Britain’s most celebrated sailor who, in addition to his Olympic success, boasts an America’s Cup win with Team Oracle USA in 2013. “Now it’s down to us to make the right decisions.”

The rise in costs is down to new rules laid out by Emirates Team New Zealand. The defending team is allowed to set the specifications for the boats that the teams will race in.

New Zealand has opted for two 75-feet monohulls, leading to an estimated 30% rise in budgets per team.

The Ineos backing is just one of the changes Ainslie has ushered in with 2021 glory in mind. Former Oracle Team USA boss Grant Simmer has been appointed as chief executive while Nick Holroyd, credited with bringing foiling to the America’s Cup, has been brought in as chief designer.

Other appointments are set to be made in the coming months across both the design team and the sailing crew.
“The event last summer was by far and away was my lowest experience in sport as we never had a look-in going into the competition,” admits Ainslie.

“We knew from the start that we were unlikely to make it through and be competitive. That’s what made it so tough. Everyone was just gutted.”

Ainslie has been impressed with how the entire team has reacted to that low.

“A sizeable dollop of luck”

So how does he assess the team’s chances of Cup glory three years out?

“We’re in a great position but we know how difficult it is to win this,” he said. “You need the right backers, the right people and the right strategy. Then, you can’t afford to make any mistakes plus you need a sizeable dollop of luck as well.”