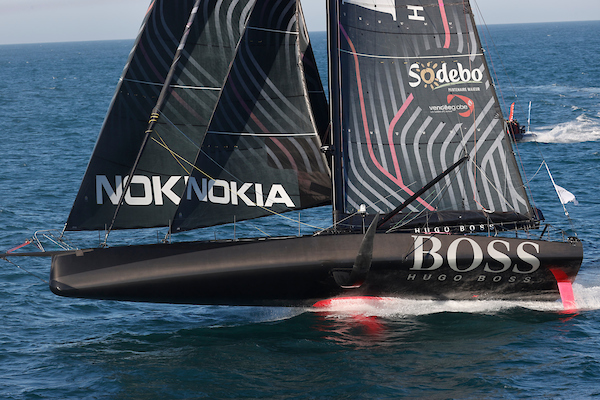 Passing the Azores, some 100 miles to the east of São Miguel island, Britain’s Alex Thomson leads the Vendée Globe fleet this afternoon on Hugo Boss.

Thomson moved south away from his closest rivals on the water early this morning, choosing a time when he thought they would be at their most tired, perhaps resting, to slide away.

Pacing himself against the newest generation of foilers like his HUGO BOSS, he is 13 miles up on Thomas Ruyant (LinkedOut) and Charlie Dalin (Apivia) as the lead group slide south on the western side of a low pressure system, described today as a ‘baby low’ when compare tropical low Theta which lies in wait for them from tomorrow Friday.

Five days into the race and the head of the fleet comprises a slightly unexpected mix of the latest foilers intertwined with older generation non foiling boats, such as sailed by the wily 61 year old Jean Le Cam on his fifth Vendee Globe and lying second to Thomson who is also on his fifth race.

Thomson has been no stranger to adversity over his 16 years chasing his holy grail, victory in the Vendée Globe. And so his message of solidarity today for French title favourite Jérémie Beyou, who had to U turn back to Les Sables d’Olonne with rig and rudder damage yesterday, came from the heart.

Dealing with his shattered ambitions of winning, founded on a four year plan which included building a state of the art foiler Charal which was launched one year ahead of the rest of the new boats, when he spoke to the French media on a recording for the  Vendée Globe LIVE show. Beyou’s pain was palpable today.

“Everyone has their own goal. For four years my life has been focused on trying to win the Vendée Globe. I’ve been giving it my all.” Beyou said, “ So when it suddenly comes to an end, it hits you hard. That’s why it took me so long before deciding to turn back. I could have taken the decision earlier, as dealing with the front meant there was collateral damage. It doesn’t feel good waking up to this.”

Summarising what had happened, he said: “Earlier in the day before the wind got up, the attachment holding the headsail clew came away. That damaged the bulkhead and ripped through the deck.

“While I was inspecting that, I saw a hole in the rudder that was half up but I told the team that I could cope. I went through the front, tacked and then the runner exploded after losing the gear at the top of the mast a few hours before. The runner was the final straw, so I changed route and turned back.”

He revealed a measure the single-minded bubble that solo racers put themselves in at his level: “I haven’t seen what’s been going on around me for four years. My Dad was taken to hospital with a stroke a week before the start. I missed out on all that. So now, I’ll be bringing the boat home and dealing with that too.”

Beyou is expected to reach Les Sables d’Olonne on Saturday. His team will make an immediate evaluation of the repairs required and ensure they have the logistics in place.

He is expected to get a warm welcome back.

Thomson who has he noted today is ‘two from four’ for Vendée Globe starts and finishes, said:

“It is terrible news, and nobody would wish that on anybody, Jeremie has worked harder than anybody probably. He has done an extra year with his boat. He has a great team, a great technical director, he has done it all and he amazed the world when he brought Charal out.

“He was the first one flying in the sky, so I am devastated for him. I know myself how hard it is to pick yourself up and particularly going back to Les Sables d’Olonne and racing all on your own. But I am sure he will make the right decision.

“It will probably be governed by the damage and how long it takes to fix it. I guess the worst thing to do would be to set off in the knowledge that you cant do a proper 100 per cent repair and then you are on your own in the Southern Ocean. I feel for him, I feel for his team, I feel for the sponsors.

“Unfortunately that is a thing that happens in this race. I am two out of four myself. I hate the feeling. I hate seeing it happen to someone else, particularly Jeremie.”

Sébastien Destremau has survived the stormy hours on MERCI, his IMOCA which he struggled to have ready on time for last Sunday’s race starts. Last night, exhausted from the first few days he fell asleep and spent several hours asleep inside the boat heading northwards.

His day was then spent tinkering on the deck and climbing the mast to untangle twisted halyards. The list of minor technical issues grows as sailors check the condition of their boats.

Menawhile, Maxime Sorel also had to climb his the mast to retrieve a halyard.

After jumping the start gun last Sunday by a matter of seconds Louis Burton completed his five hours penalty last night, losing more than 70 miles in the process. In addition to that the skipper from Saint Malo has had to mop up litres of oil (coming from his keel cylinder) spilled inside his boat before grabbing the grinder to repair a small crack on his bulkhead

All of the skippers have been making sure they are rested as tomorrow morning they will have to tackle the big tropical depression Theta which blocks their way.

Theta, the 29th tropical depression of the year

It is front of mind for all the sailors. It’s a big red ball sitting right in the middle of the map. The solo sailors will have to pass round it to  the west.  Those who come in too close could be severely punished. Because this subtropical depression contains winds of 50 to 60 knots and waves of 6 meters.

Its name is Theta. And this is the 29th tropical depression of the year, a record since so.

For the record, tropical and subtropical depressions are named after the letters of the alphabet. First 21 letters from the Latin alphabet and now we switch to the Greek alphabet. Theta is the eighth storm named using the Greek system.

Quotes from the boats

“I was in the leading group yesterday evening and for part of the night. So much the better! It means things are going well for me. For the moment, I don’t have a lot of worries and I hope I won’t have any by saying so.

“I hope it lasts! I’m trying to find my rhythm between going fast and preserving the boat, space out the manoeuvres to avoid any risks. Since the beginning, we’ve been in pretty difficult conditions, we haven’t yet been able to really use the potential of the foilers. I hope that once Theta has passed, we’ll be able to take advantage of more favourable conditions to use the foils.

“I’m constantly restricting myself, braking in order to save my boat for later, but also to save myself up because the Vendée Globe is long! But I don’t have both feet on the brakes for too long. Concerning Jérémie Beyou’s damage, well I know all too well the commitment that our projects require – for the skipper, the team, the partners…It’s years of work, of deliberation, and it’s certainly something we wouldn’t wish on anyone. My stomach turned to knots when I heard the news. My heart goes out to Jérémie and his team.”