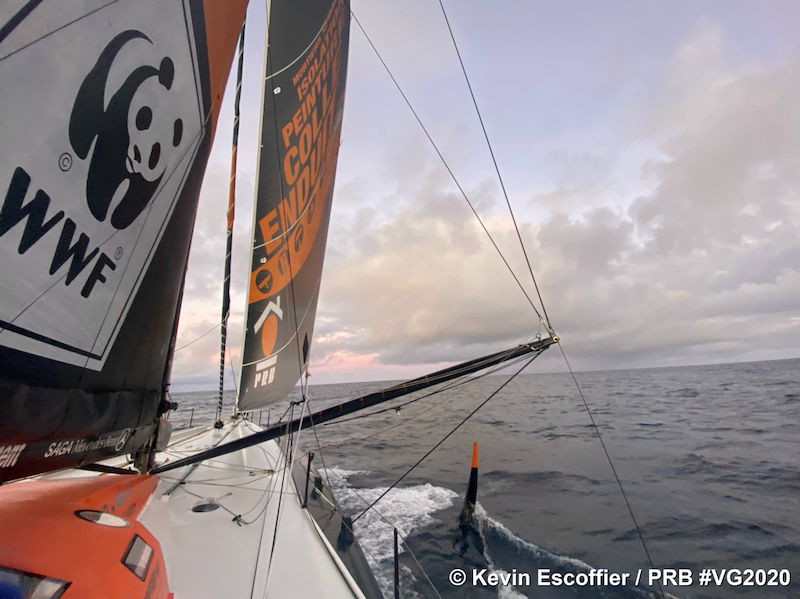 After a tough night for the easterly pack of the Vendee Globe fleet which has been taking on headwinds gusting over 40 knots and big cross seas, the first boats to break through the storm front have tacked south westwards early this morning.

The first two to tack and point their bows to the south west were Thomas Ruyant (LinkedOut) and Louis Burton (Bureau Vallée 2).

These two are now on the faster, making tack in the north-westerly airstream and should profit over the coming hours as they converge with their fast foiling rivals who are to their south east. They are now set to profit nicely after they were the first to make the move to the west yesterday morning.

At about 20 miles from Ruyant Seb Simon from ARKÉA PAPREC reported this morning, “I got seasick for the first time in my life. It was undoubtedly the stress of getting through this powerful front.”

Meanwhile, French skipper Armel Tripon has been forced to make a painful turn to the east on L’Occitaine and head for La Coruña, some 350 miles away, where he plans to anchor to effect a repair after the hook failed on his J3 headsail causing it to fall down. He is expected to anchor in shelter close to the coast and effect the repairs required.

Despite the gains being made in the west it is still Maxime Sorel who tops the Vendee Globe leaderboard early this morning by virtue of his most southerly position. The skipper of V and B Mayenne is still in the strong south westerly flow, with winds of 25 gusting 30 knots already and has some 200 miles still to sail until he gets to this relatively slow moving front.

“We do not have foiling boats, our idea was to stay far from the front and take fewer risks”, explained Benjamin Dutreux (OMIA – Water Family) this morning, currently fourth in the ranking.

So too Nico Troussel, who is the only skipper among those sailing new fast foilers to have opted for the southerly option will have to remain on port tack for some time before getting to the front and tacking on Corum L’Épargne. This morning Troussel was second – 13 miles behind Sorel.

After some two and a half days of sailing the main peloton of foilers are tightly grouped, most of the racing having been upwind over the last 48 hours at least.

In terms of this morning’s leaderboard Kevin Escoffier is best in 10th on PRB, six miles up on Sam Davies (Initiatives Coeur) while Charlie Dalin (Apivia) is 13th. Alex Thomson has made a decent gain during the night in terms of reducing his angle on Dalin and the boats which were above him last night and the British skipper could do well once he tacks Hugo Boss. Thomson is 15th to Jérémie Beyou’s 14th. Also in contact in this pack is Clarisse Crèmer (Banque Populaire).

The key for this group is timing their tack after the front. As it is not moving fast away from them, being too hasty can mean being sucked back into the south-westerly flow.
Without doubt with winds over 30 knots most of the second part of the night and gusts over 40 knots there will be problems to sort out, while the southerly group have the worst to come.

MACSF skipper Isabelle Joschke admits to playing it safe. Yesterday during the LIVE the  Joschke said:

“I intend to be careful and go in conditions which I consider to be manageable. If we have to take a different route than the others, I will.”

At midnight, Isabelle Joschke decided to tack towards the Spanish coast in order to avoid the worst part of the depression.

Aboard 4myPlanet Alexia Barrier opted to head west, more than 170 miles to the north of the current leader, Maxime Sorel.

“I too hesitated to take that option because the front freaked me out,” she reported. “It’s a bit of war, I have 30 to 35 knots of wind, two to three metres of waves at least. But I’m ready to jump out to take over from the pilot if necessary. I don’t have much cover so you have to be ready at all times.”

Fabrice Amedeo heads back to sea

At 2210 last night Fabrice Amedo on Newrest – Art et Fenêtres set sail from the Port-Olona pontoon before restarting at the Nouch bouy at 2315hrs. His tech team had been busy for two and a half days repairing a six centimetre crack in the mast and changing the hook.

As he passed out the channel, at night, Amedeo was cheered by many local residents.

“There were people on both sides of the channel, it was really great. I was very touched, it boosts me for the future. We need people’s energy to go around the world and there it is, I’m ready. »