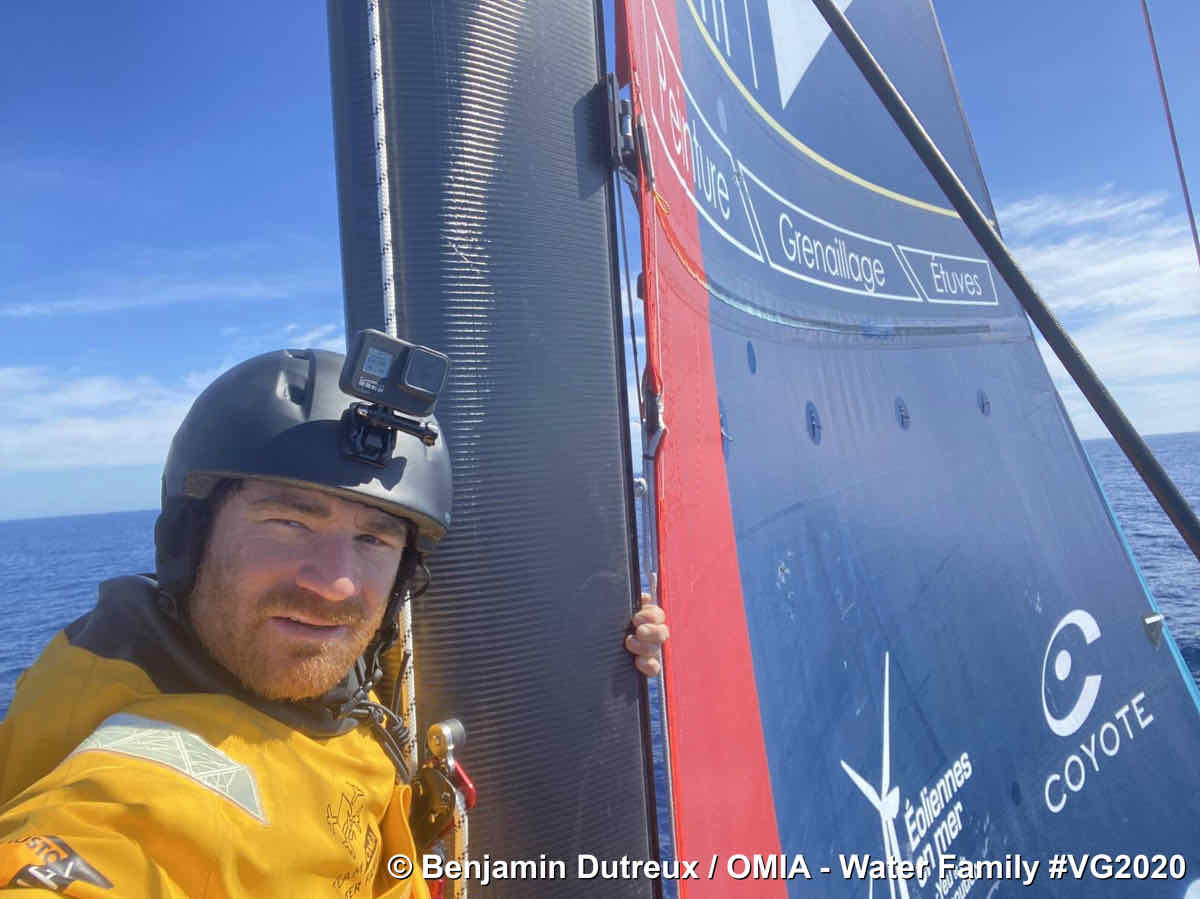 Happy New Year. Happy 2021. Wherever you are in the world right now this is how we greet each other. Maybe we greet each other on Zoom or from behind blue paper masks, proof that we still bring a little of 2020 with us into the new year, but behind the earnest salutations and muted celebrations is hope that we have turned a corner.

However, as political tensions flare and vaccination roll outs stumble forward, we all know that nothing will change dramatically with the turning pages of the calendar. We need to hang on, endure, and keep on hoping. Why do I bring this up? No, I’m not depressed. Instead, I invite you to turn your gaze southwards to the skippers in the Vendée Globe who are living a dramatic turning point in their lives.

Masked behind layers of clothing, shaken remorselessly by the wilds of the Pacific Ocean, the sailors who are now rounding the famous Cape Horn are living out the world’s most closely held desire, that of a blue sky, calm seas and a tomorrow that will be dramatically different from today. The slideshow on the Vendée Globe website of bottles of champagne and twinkling eyes deep-set in tired, smiling faces, allows the rest of us to live vicariously through their joy and relief when our own corner remains as yet out of reach.

Even under blue skies, the skippers don’t have much time to breathe a sigh of relief because the top ten boats remain historically close together and the calmer conditions allow running repairs that had to be put off in the wilder conditions last week. Boris Herrmann patched a tear in his mainsail that forced him to round Cap Horn with just his J3 jib. Charlie Dalin sent back a selfie from the top of the mast when he was checking his locks and halyards and most impressively Benjamin Dutreux climbed the mast and re-hoisted his J2 sail.

On the face of it, that doesn’t sound too impressive as most days at sea require multiple sail changes, however, the J2 is different. All IMOCAs are required to have one permanently fixed forestay, allowing all the others to be integral to the sail and hoisted or removed during manoeuvres at sea. The permanent forestay corresponds with the J2 (Jib number 2) and is lashed permanently to a swivel on this cable.

A couple of weeks ago Benjamin wrote that this sail had broken in a storm and he had to climb the mast to recover the remains. This exact failure happened to me four years ago and I felt his pain, both as it’s dangerous to climb the mast in such conditions but also because the J2 is a crucial sail to climb back up the Atlantic and I sorely felt its loss.

Incredibly, during the brutal conditions the fleet has been sailing in he has been repairing his 100 square meter sail (half the size of a tennis court) inside the front of his boat and when the conditions allowed, had it ready to hoist again. This again is not so simple, as he needed to hoist the sail up the forestay using the fractional halyard, tying it on as he went.

Then, with the sail flapping, he needed to climb up the mast himself to the head of the sail to secure it to the cable, disconnect the fractional halyard, climb down, tension the sail at the tack before either sailing with the sail or furling it away. It is a monstrous job that normally requires the close coordination of 3 people in normal times. Hats off.

Sadly other boats are showing more significant signs of fatigue, notably with their keels. All the racing yachts have canting keels that significantly increase their righting moment and thus power and speed. With the exception of Pip Hare’s Medallia that uses a powered winch and ropes to cant the keel, the rest of the boats use powerful hydraulics to swing the keel from side to side during manoeuvres and, on the new foilers, to adjust the power in the boat to avoid the lift generated by the foils from over stressing the boat.

These hydraulic systems are taking a beating and have failed at a much higher rate than previous races. Four years ago Paul Meilhat retired from the race with a split keel ram, but it was an isolated event whereas this year Alan Roura (La Fabrique) and Sébastian Destremau (Merci) have had hydraulic flexi hoses fail, Louis Burton (Bureau Vallee) and Boris Herrmann have had their keel motors fail and Isabelle Joschke (MACSF) has suffered a failure between the keel ram and the top
of the keel. 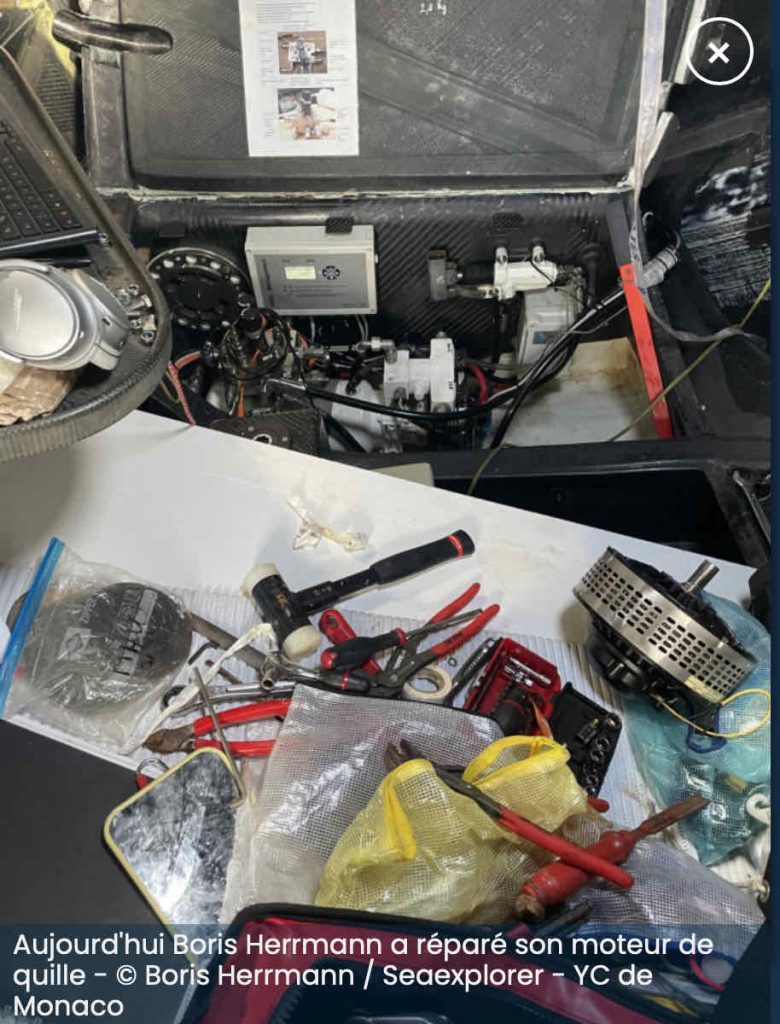 From this bunch, Sébastian has fixed his problems, Boris has replaced his motor (see photo above) and Louis is hand pumping his keel. I called Hydroem, the manufacturer of the one-design hydraulic system onboard all 2016+ boats and their director put some numbers next to Louis’s increased workload. He moving the keel from its zero position to full cant after a tack or gybe would require more than 160 laborious strokes on the high-pressure pump handle. I have a feeling Louis is going to look like Popeye upon his return to Les Sables d’Olonne!

As hard work as that sounds, both Isabelle and Alan would be looking on jealously as their problems require them to fix their keel at the zero position for the rest of the race. Alain Gautier, manager of the MACSF team, said in an interview with the Vendée Globe news team that this technical problem is a “colossal setback that will penalise the boat’s performance by 20-30 per cent.”

Looking ahead at the actual racing, the next 48 hours will be defined by a quick succession of two high-pressure zones and a fast-moving, compact, depression that could well upset the rankings. In the sequence of weather snapshots below, you can see that those chasing Yannick Bestaven (Maître Coq) will attack the coming hours with two different strategies that were defined but their positions on the field of play.

Charlie Dalin (Apivia) has lost most of his advantage over Thomas Ruyant (LinkedOut) and the two near-sister ships are currently sailing upwind on starboard and will tack over when they meet the approaching depression later tonight. The fast-moving depression will then deal them fast broad reaching that will help them close up to Yannick who will be skirting a zone of light winds. 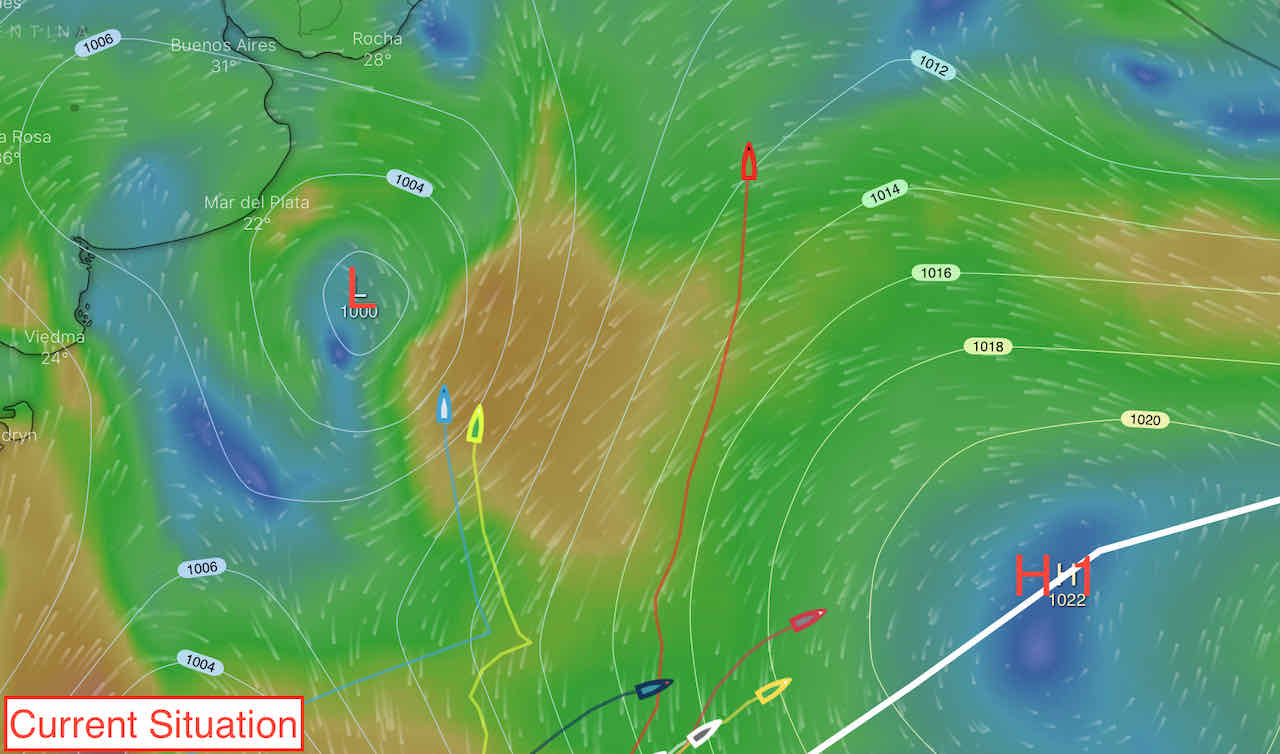 The rest of the chasers are currently sailing on port into the western edge of the high-pressure zone to their east, but they will also be overrun by the depression and, after hard upwind sailing on Friday will also get the slingshot of the broad-reaching conditions following the depression’s passage. This rapid progression will create a very uncomfortable sea state that will have the sailors wishing for the rolling swells of the Pacific. 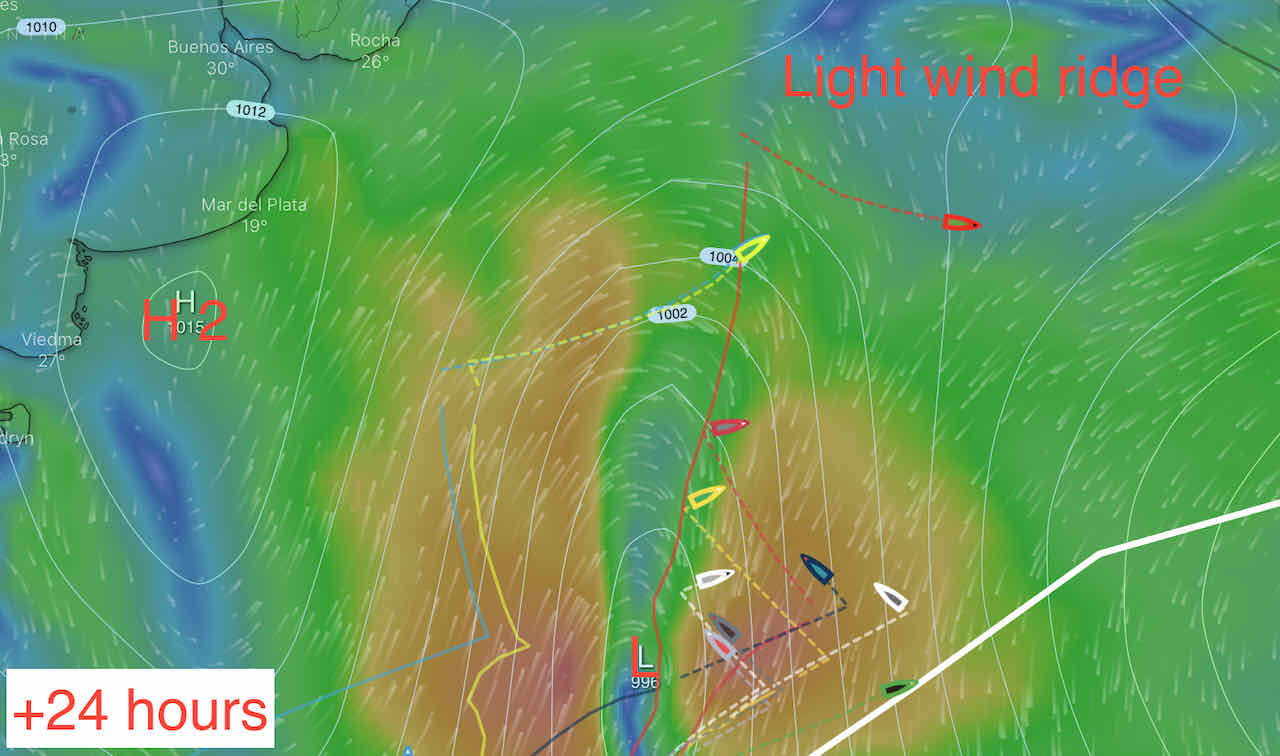 Over the weekend, the front of the fleet will have pretty stable reaching/ running conditions on the eastern edge of the new anticyclone (H2, above) but there’s a new barrier on the horizon as they approach the latitude of Rio that will further complicate the transition to the trade winds around the St Helena High. 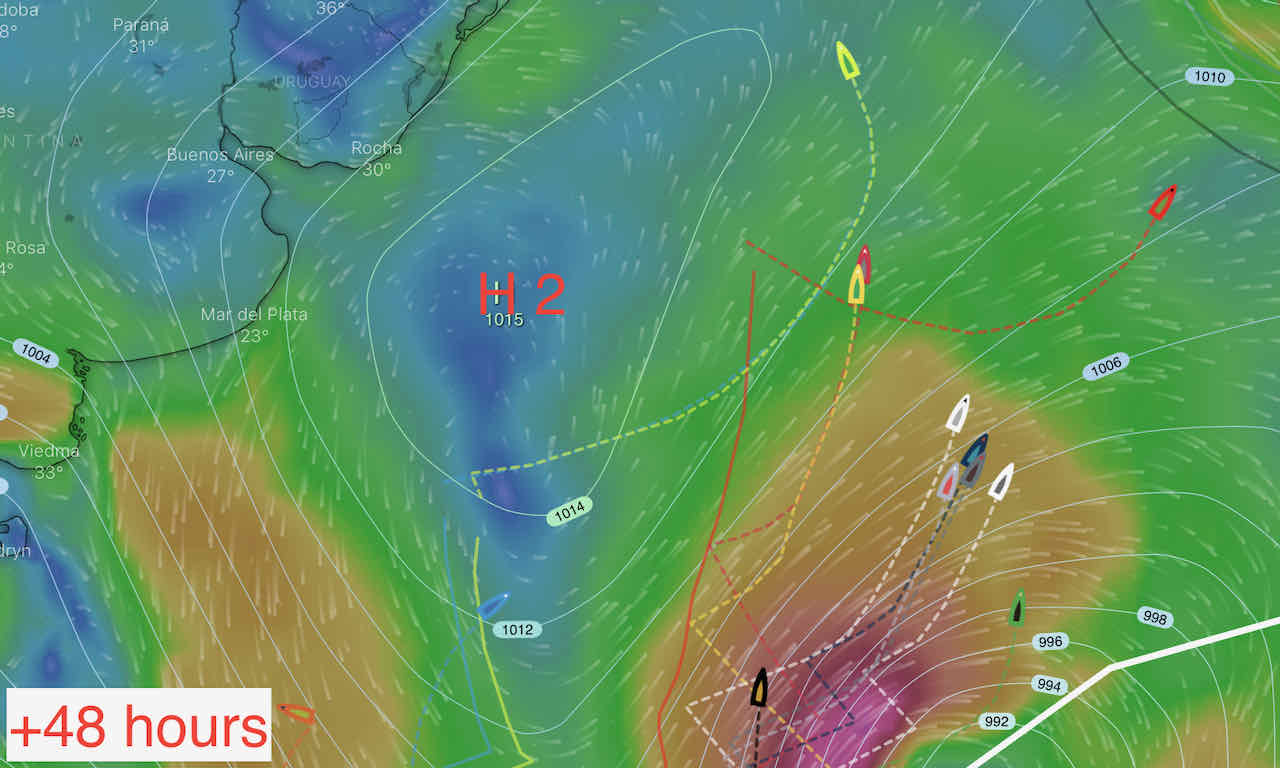 Finally, Pip Hare is closing in on her first Cape Horn rounding and has found that her port rudder stock (the structural beam that extends through the blade of the rudder into the shaft inside the boat) has fractured.

This puts her at risk of the rudder breaking off and creating a hole in the boat that could let water in. She needs to choose her moment to replace the rudder carefully, as she will need to heel the boat over to get the broken rudder out of the water and will need light winds and a manageable sea state. A tough ask at more than 1000 miles from the notorious Cape Horn.

In a recent video from the boat, she said:

“I’m very accepting of what’s happened and I’m very confident that we’ll find a solution. The main thing is, I’m not at risk, Medallia is not at risk, we’ve got everything in place to solve this problem and then carry on.”

Wise words and a great attitude for us all as we carry on into 2021.