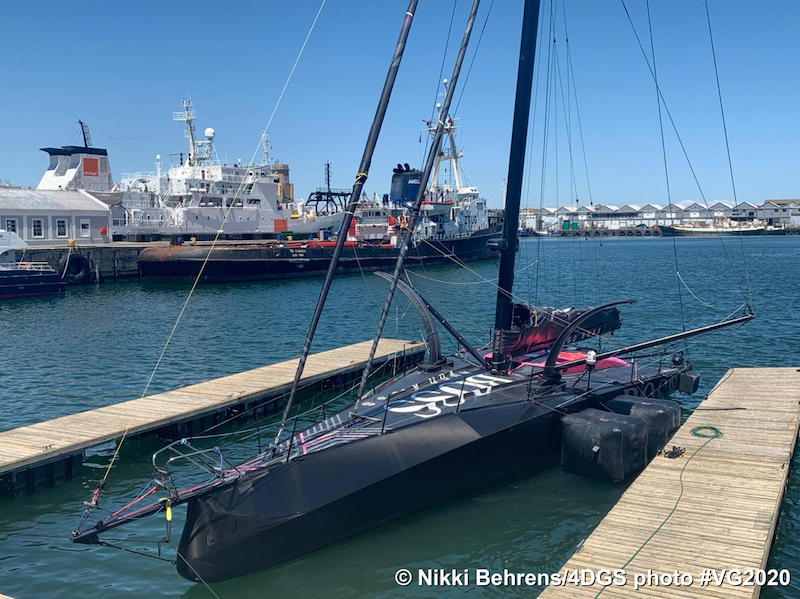 After irreparable rudder damage last weekend put a stop to his quest for victory in the Vendee Globe, British sailor Alex Thomson has arrived safely in Cape Town, South Africa aboard his Hugo Boss IMOCA 60 and confirmed his withdrawal from the solo around-the-world race.

It took the skipper almost seven days to make the 1,800nm journey to port, sailing his wounded racing yacht using just one rudder. Thomson set a course for Cape Town on Saturday November 28 after he was forced to give up racing 19 days into the solo, non-stop, unassisted round-the-world yacht race.

Speaking today from Cape Town, Thomson said: “I’m certainly relieved to be back on dry land but I have very mixed emotions today. I’m still coming to terms with what’s happened, and I’m obviously utterly devastated that this is how the race has ended for us.

“But, as I’ve said before, it’s in our toughest moments that we find our greatest strength. Now we have to pick ourselves up and move forwards, and I’ve no doubt that we can do that together as a team”.

The 46-year-old sailor from Hampshire, England was one of 33 skippers to begin the Vendee Globe from Les Sables-D’Olonne in France on November 8 this year.

The ninth edition of the iconic race, which takes place just every four years, has already seen a number of boats suffer technical failures, collisions or fall victim to the tropical storms and changing weather conditions.

“Over the past week or so we’ve been reminded of just how difficult this race is. I’ve said it time and time again but there really is no sporting challenge in the world as tough as the Vendee Globe.

“I have such admiration for any skipper who takes on this race. My thoughts go out to those who, like us, have had their races cut short. And I wish the remaining skippers a safe passage and a good race. I’ll be watching closely.

“My arrival here in Cape Town marks our retirement from the race. To everyone who has sent messages – a huge thank you. I’ve been overwhelmed by the support we’ve received. It means so much to us, it really does.

“Right now, I’m looking forward to a shower, some sleep and getting home to my wife and my beautiful children”.