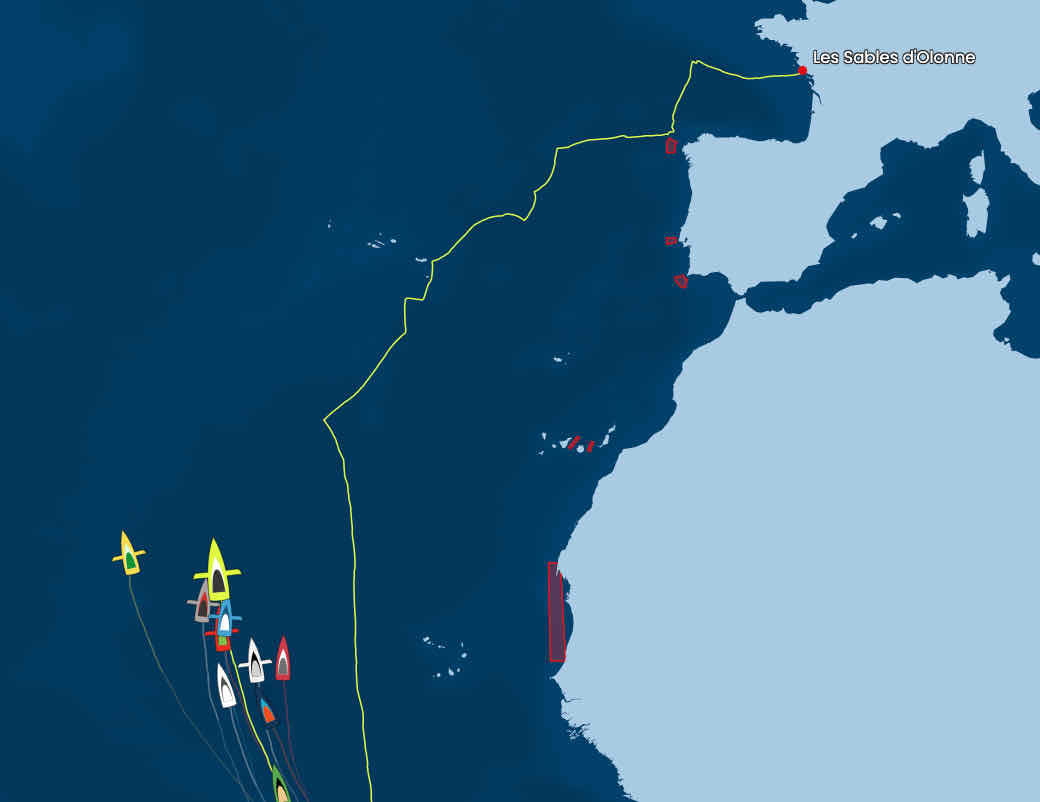 The electrifying battle for the top spot in the Vendee Globe is set to further intensify as the leading pack of solo skippers wind themselves and their boats up into a final do-or-die push to the finish – now less than one week away.

Even the most informed of France’s pre-race race prognosticators did not project a podium finish for the maverick 35 year old from Saint Malo Louis Burton, but most avid race watchers now see the skipper of Bureau Vallée as having a small lead as he is furthest north and faster than his nearest rivals.

Even if the rankings have him fourth this evening – as he is to the west of his rivals – it looks like he may be first to round the Azores high pressure and connect with the low pressure express train to the finish line.

“He can be into the southwesterly winds first and benefit from a lane through the high pressure corridor with a more constant wind flow and then with a more sustained better angle than his pursuers,” suggested Sébastien Josse the weather consultant for the Vendée Globe.

“The others will be more downwind, forcing them to manoeuvre more. Louis could stay in the same flow as far as Les Sables d’Olonne and be in several hours ahead at the finish.”

But the leader on the rankings Charlie Dalin says the two will re-connect, “We will meet again under the Azores and we will have to do a series of gybes and sail changes, there is still a lot of work to do before the finish!”

As the tension builds and time counts down to the finish, the skippers are feeling the pressure like never before. Thomas Ruyant continues to be quick but the skipper who originates from Dunkirk, Normandy was clearly frustrated that with no port foil he will be compromised during the final sprint and may lose out.

“I knew the Atlantic climb was going to be complicated with a lot of starboard tack,” he told the radio session this morning. “With a compromised boat it is difficult and frustrating not to compete with those around me on equal terms. But here I am, I take my troubles patiently and hold on to a competitive spirit. In a few days, the downwind conditions will allow me to stabilise things a bit. There might be less of a performance gap so I’ll do everything to keep in touch.”

Germany’s Boris Herrmann (Seaexplorer-Yacht Club de Monaco) has progressively recovered miles since his passage across the Doldrums and is back pacing the leaders mile for mile, quickest on all of today’s measures and looking like he has the potential to finish across the line in a podium position.

“It is pretty bouncy in the trade winds. Boris is looking forward to getting into the high pressure system and getting into the lighter regime to really make sure he in the best shape for the finish sprint. He is intent in really looking after himself these next couple of days. He is very even headed and in a good place in his head. The breeze is dropping sooner than expected and you can see Louis is into light winds already,” commented Herrmann’s usual co-skipper Will Harris.

Predictions have the leaders arriving into Les Sables on the 27th January with as many as six boats arriving on the same day.