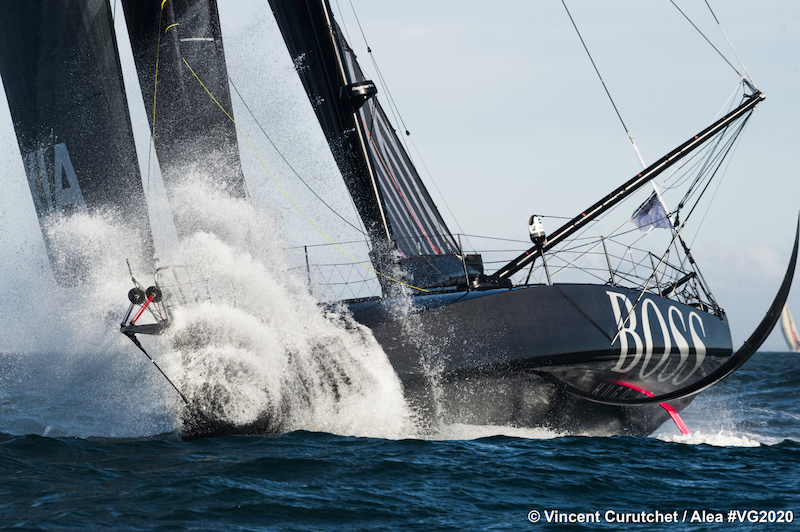 It has been a tough weekend at sea for British Vendee Globe race favourite Alex Thomson who has dropped out of the leading pack after discovering structural damage in the forward section of his all-carbon fibre IMOCA 60 yacht.

The British sailor who is competing for the fifth time in the Vendee Globe single-handed nonstop around-the-world race had led the 33-boat fleet for much of the two weeks since leaving Les Sables D’Olonne in France on November 8 but was forced to slow his boat to a crawl yesterday to try to effect repairs to a longitudinal beam in the bow section of the boat.

Immediately after becoming aware of the damage Thomson notified his support team back ashore who straight away began work on a repair plan to enable him to keep his dream of becoming the first British skipper to win the historically French-dominated race.

To carry out the repairs Thomson has had to turn his boat downwind and slow to a snail’s pace while his two closest rivals Thomas Ruyant on LinkedOut and Charlie Dalin on Apivia scorched away into an around 250-mile lead this morning.

Despite the setback Thomson’s support team say they are confident that he will be able to effect a good enough repair to enable his to take on the most challenging section of the race – the fearsome expanses of the Southern Ocean.

For his part Thomson seems remarkably pragmatic about his predicament.

“It was a bit of a shock at first but obviously it could have been a lot worse,” he said in a statement issued by the team overnight on Sunday. “It’s repairable and we’re not yet in the Southern Ocean.

“Normally I feel angry and sad and emotional, but I don’t this time. I just need to get on with it. I’m sure at some point the emotions may go the other way but, for now, there is only one thing to do, and that is to get the job done as best as I possibly can.

“I will do whatever it takes to stay in the race”.

Thomson said the first part of the repair required: ‘some cutting, gluing and bolting’ to stabilise the hull.

“That’s done now, and it’s been laminated,” he explained. “The next part is to get the rest of the repair prepped.”

“I’m in a rhythm now so I’ll keep going for as long as I can. It’s quite an intricate job so I can’t rush it and I need to make sure it’s right.”