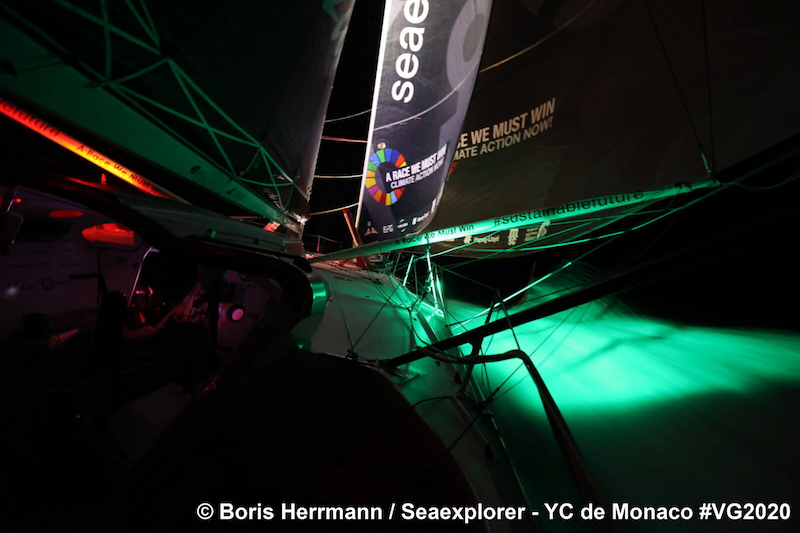 The north-easterly trade winds should increase progressively today and the leaders will be on this port gybe for at least four or five days. After one, or perhaps two sail changes today it will be fast, steady miles directly southwards to the Doldrums.

The good thing for Thomson and Le Cam right now is that they largely have their main rivals following in their wake. There are no strategic options for the next few days and so it is very much a speed race south, and the leaders should get richer initially.

“The sea is flat, the boat slides like a drop of water on an oilcloth. The sky is starry. When you light up the spinnaker with the torch, it’s beautiful! It feels good to have this calm in this brutal world, ” Le Cam said on his early morning radio call.

On board temperatures are rising. It’s over 20 degrees outside. The fleeces have been stored in the boat and sailors work the deck when needed in shorts and T-shirts. Now is the time to catch up on your sleep deficit, to eat a real first meal, to make good coffee or a tea, the things that the punishing work rate have not allowed start of Les Sables d’Olonne.

“Since the start, it’s the first day with a little time for me,” said Benjamin Dutreux, third on the morning standings.

The trade winds within reach

Winds were still a bit unsettled and variable last night so boat speeds were up and down and the course angles made quite different. For the moment, Jean Le Cam is still keeping up with the pace, but he knows that in a few hours, in the trade winds, when the wind stabilises in the northeast, the foilers will be able to move away.

In the meantime, the Thomson-Cam duo remains in the lead, a good fifty miles ahead of a pack of pursuers. But behind there is the main dozen strong peloton from Dutreux in third to Sébastien Simon in 16th – all within about 130 miles of each other.

The Theta depression has been good for Isabelle Joschke and Kojiro Shiraïshi who have managed to use it to cut the corner and reduce their deficit to the leaders. However the Japanese solo skipper has a big job on his hands to repair the rip in his upper mainsail.

To the south-east of the Azores, it is still light winds for six boats at the back of the fleet that have struggled to get clear of an area of ​​light winds. This morning, Miranda Merron, Ari Hussela, Alexia Barrier, Armel Tripon, Clément Giraud and Sébastien Destremau were between 600 and 770 miles behind the leaders. Merron crossed Huusela’s path and they chatted on the VHF.

Boris Herrmann (GER, Seaexplorer-Yacht Club de Monaco) said his toughest moments in the race so far had been while in the frustrating grip of light winds which stymied his progress for many hours.

“Probably the worst moment for me was when I was completely stuck in the high pressure ridge earlier on,” Herrmann said. “Sometimes being in light, light winds is more stressful than being in very strong winds, and now we have reached this pretty nice zone with light breeze with not too many strategical problems.

“I expect that we can more or less go straight south today, we will reach a zone with stronger winds over the day and in the evening be up and running quite fast on our foils and probably a smaller headsail. So the job of today is to switch gears, from the big gennaker to the code zero to the smaller headsail.

“We don’t need to worry about positioning anymore, we are positioned on our way south and we go straight ahead with this nice weather which gives us the opportunity to take some time for us, to get some rest and recover, to get some sleep and enjoy the good conditions here.