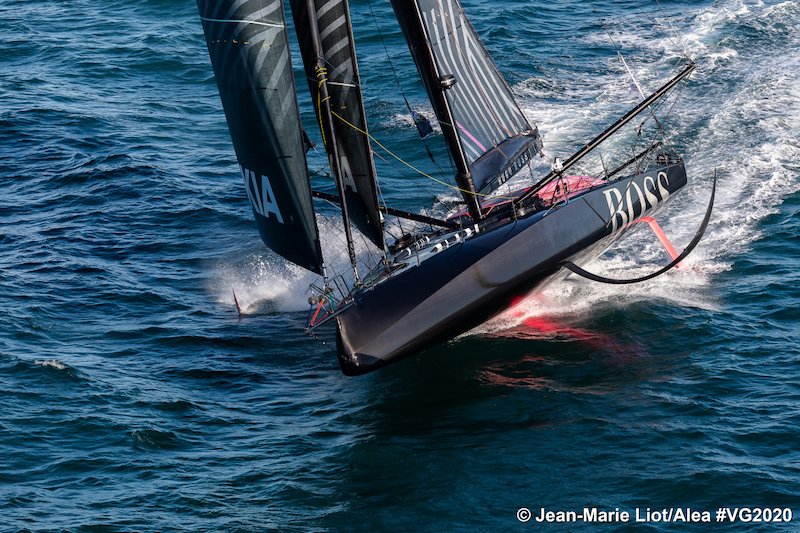 Thomson is continuing with the race but has dropped from second to third overnight behind two French skippers – Thomas Ruyant on LinkedOut and Charlie Dalin on Apivia. This trio have been on a charge over recent days and have broken away from the main fleet by some 250 nautical miles.

This morning all three are sailing slower than recently as they encounter a transition zone associated with a fragmented St. Helena high pressure system in the South Atlantic. However, while Ruyant and Dalin are sailing at 12 – 13 knots, Thomson who is 800 miles east of Rio de Janeiro has been limping along at half those speeds – making just 42 nautical miles overnight.

The leaders are looking to wriggle through a zone of lighter, unsettled airs to reach the stronger conditions at the fringe of the Southern Ocean. Dalin (Apivia) passed about 23 nautical miles to windward of Thomson around midnight, to take over second place in the 24,000 nautical mile around-the-world race.

Speaking at 0400 this morning Dalin said:

“I hope it’s not too bad and the extent of the damage is limited. Most of all I hope that this does not mean the end of the Vendée Globe for him. We are having a great race with him. Alex being part of this trio is very stimulating ”

Talking of the weather scenario Dalin said, “I have the impression that I am reliving a Doldrums passage, but it is even more bizarre. I found some pretty strange variable winds, sudden changes in direction and force, I really didn’t expect that. I even got gusts from the north west yesterday.

“This morning, the sea is flatter and there is a beautiful starry sky, it is beautiful.”

The slowdown in these light conditions by the leaders means there has been a small gain by the chasing group, with fourth placed Jean Le Cam’s overnight average of 14 knots, closing the gap by around 25 nautical miles to 274 this morning.