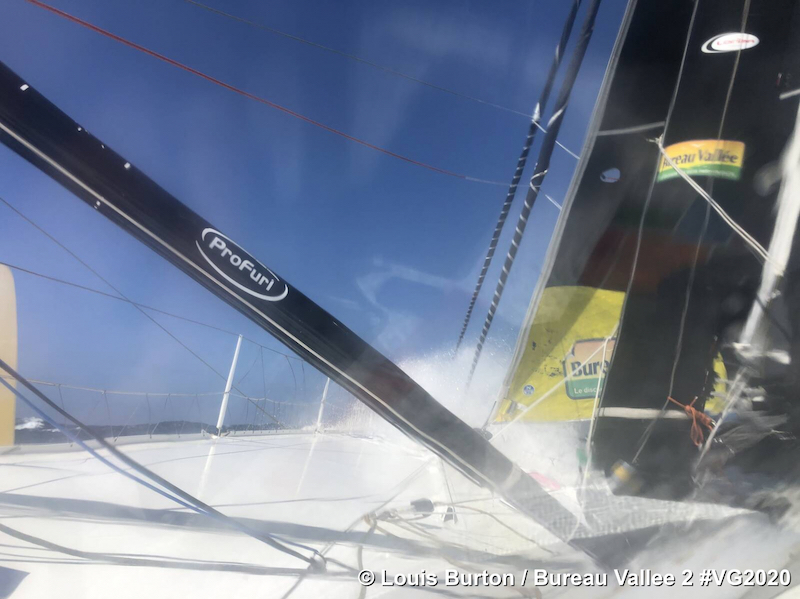 Just like everyone else, the French Vendée Globe skippers are in lockdown and in a thick fog with limited visibility, while they wait for the situation to brighten.

Yards have been closed down, the Transatlantic races are under threat of postponement, launches and training sessions put back to a later date.

What can the sailors do to advance towards their main goal of the year, the non-stop solo round the world race, which will begin on 8th November in Les Sables d’Olonne? Arnaud Boissières, Jérémie Beyou, Clarisse Cremer, Samantha Davies, Sébastien Destremau, Louis Burton and Fabrice Amédéo tell us more.

Pulling together
Just like the rest of the population, the Vendée Globe skippers are currently experiencing the effects of the public health crisis. Boat yards and the preparation of boats have come to a standstill. Sailing is not allowed. Some of the shore teams are on temporary full or part time unemployment. Sailors have to stay at home. “There is nothing else to do but get things into perspective. This is just a sport. It is nothing in comparison to the effect on the economy in general. Knowing how to adapt is something we are used to doing when sailing,” declared Clarisse Crémer (Banque Populaire X) whose boat was relaunched recently.

The prevailing message you find from sailors is clear: we must all pull together. Samantha Davies is particularly concerned by that aspect. “With Mécénat Chirurgie Cardiaque, we are in contact with people who work in hospitals. At the moment in France, there are children who have operations scheduled, but the hospitals need the resuscitation beds and so they will have to wait. It is complicated for them and their families. We want to set a good example and respect all the rules.”

Collateral benefits
In his garden at his home in Saint-Malo, Louis Burton (Bureau Vallée 2) goes further: “We have the duty to keep people feeling upbeat. If you think about it, you could say it is Mother Nature hitting us hard and forcing us to let the planet breathe a bit.” This idea was widely shared by Sébastien Destremau whose boat (Faceocean) went into the yard, when everything was shut down.

Forced to remain at home, sailors are spending the time on matters they cannot usually find the time to deal with. “I have a company to run, so am busy with the paperwork,” explained Arnaud Boissières, one of the first to have announced the suspension of work on his boat, La Mie Câline-Artisans Artipole. I will also be stepping up my physical preparation, without becoming like Arnold Schwarzenegger or Jérémie Beyou, but I will be spending more time on that. That helps you get things sorted in your head and eliminates the stress.”

Clarisse Cremer and Sam Davies are studying the videos and programmes sent by their respective coaches. Jérémie Beyou is clocking up the miles on his bike trainer. In Toulon, Sébastien Destremau has been out cycling in the hills around Mount Faron, whereas previously physical preparation was the least of his concerns.

When they are not working up a sweat, the sailors are studying the weather, road books, case studies from the round the world voyage and route planning.

At Charal and Banque Populaire, they are busy working on analysing performance data and the boat’s polars (These are the data tables of maximum speeds for the boat in every wind condition and sea state, in every point of sail and with each sail configuration and trim. Accurate polars are key to allowing the sailors to find the best route possible via the sailing software the sailors use when sailing alone.)

There is one unforeseen benefit due to this episode. These men and women, usually totally engrossed in their daily life with their round the world project, are now able to spend some time with the family.

“With Romain (skipper of Pure), we were afraid that we weren’t being good parents this year. But for now, we’re all taking advantage of the situation spending time together,” said Sam Davies. “What is positive in all this,” confirmed Fabrice Amédéo, “is that I can spend more time with my children. In some way, we are lucky. This is something worth grabbing with seven months to go to the Vendée Globe.”

Uncertainty about the transatlantic races and when sailing will restart
There was a busy schedule for all of the Vendée Globe competitors throughout the spring: boats coming out of their winter refits, launches, measurements, sailing aboard the modified 60-foot boats and especially the brand new ones. The two solo transatlantic races, offering real-life reliability tests and an opportunity for some to complete their qualification, were at the heart of this schedule.

At the moment, eleven sailors still have to qualify to be able to complete the application process for the Vendée Globe. Un Der the letter of the rules, four skippers – Clément Giraud, Kojiro Shiraishi, Isabelle Joschke and Armel Tripon –  still need to compete in a solo transatlantic race to qualify.

The Transat CIC which was due to start in Brest on 10th May, has been postponed. It was due to be followed by the New York – Vendée transatlantic race (start on 16th June). But because of all the uncertainty, everyone involved – organisers, the Imoca class and the Vendée Globe race directors – are discussing ways of finding a replacement solution depending on how the health crisis evolves.

All of the racers, including those who are the furthest advanced in their project, are in favour of a long distance solo race taking place as soon as the situation eases.

“At Charal, we don’t deserve as much pity as others,” said Jérémie Beyou. “The boat has sailed a lot (even if her new foils need to be tested, editor’s note), and the team is well practiced. But looking ahead to the programme coming up, we need to take into account the different situations facing the teams, as we need everyone there and that is important. It is important for the quality of the Vendée Globe and the reliability of the boats.”