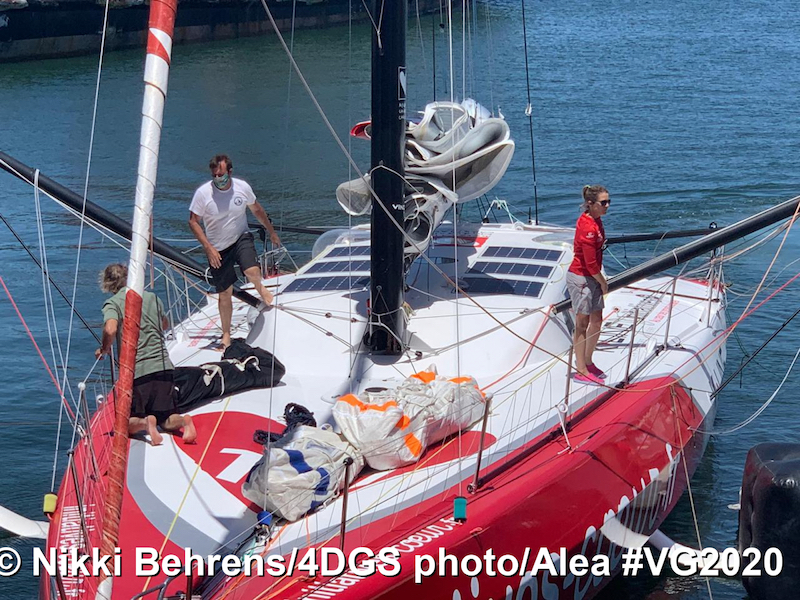 British Vendee Globe solo skipper Sam Davies has confirmed her retiral from the 2020-21 edition of the round-the-world yacht race after pullung in to Cape Town South, Africa to assess damage to the keel support structure of her IMOCA 60 yacht Initiatives Coeur three days ago. Although her race is over Davies has said she plans to complete her lap of the world after the boat is repaired.

In consultation with her team, she made the decision to stop in Cape Town. This morning as she arrived in Cape Town she confirmed on video that she is officially retiring from the race. But she says she is determined to return – after making repairs with her team and experts – to complete the race course as ‘hors course’, unclassified on the solo race which forbids any kind of outside assistance.

Sam hopes to complete the round the world voyage outside of the context of the race for her own benefit and for the children concerned by the 1 click=1 heart campaign. So far 28 children have been saved since the start of the Vendee Globe.

With Davies’ boat clearly unsafe to continue the voyage in the Southern Ocean, stopping to take the boat out of the water in South Africa for a survey and repairs means the British sailor would breach the Vendee Globe rules prohibiting outside assistance and so she has retired.

‘I had gybed behind the front in 30 knots of wind. I was sailing on tricky seas at a speed between 15 and 22 knots,” Davies said, recalling the keel strike incident. “I hit something and it felt as if I had run aground on a rock, as I came to a sudden standstill. There were cracking noises.

“I went flying along with everything in the boat including my dinner. It was violent and I hurt myself. But I was lucky, as it could have been much worse, but my ribs hurt. I immediately brought down the sail to stop the boat. I hit an unidentified floating object. I immediately took a look at the keel, as I knew it wasn’t the foil but the keel that had been hit.”

The bearings and forward and aft bulkheads in the keel housing are in good shape, but the longitudinal bulkheads are cracked. That is what absorbed the shock. I checked everything and contacted my team and they have been working with the designers.

“It happened at night, as it always does with this sort of problem. It was pitch black when I checked everything. It was the same when I lost my mast (in the 2012-2013 Vendée Globe). I did what I could in 30 knots of wind in mountainous seas.

“The collision shifted the keel ram protection which ensures a watertight seal between the keel housing and the ram. Consequently, I was taking water aboard, which required my immediate attention. I put the pump on to empty the water entering the keel housing.

Davies said this morning in Cape Town: “It’s too dangerous to enter the Southern Ocean with all these things wrong with the boat. You really have to inspect everything. I think that is also the magic of the Vendée Globe: the race stops but I hope the adventure does not end here.

“I’ve always said my mission is to sail around the world on this boat. For me, but also for Initiatives-Cœur, to support cardiac surgery for the kids. If I can fix the boat and go, I’m motivated to do it. This is the positive side of the story, I still have a mast, I still have my keel! I have all the pieces, I have a great team.

“It will probably take time, it’s a big job but I’m very positive to give it a go as Isabelle Autissier did. I think hers is a really good example, to try to keep going anyway.

“If the boat is repairable, I am determined to go again. It’s my philosophy and that of the team.”