Skip to content
You are here
Home > Editorial > Vendee Globe: Meet Charlie Dalin – the rookie with a winner’s attitude 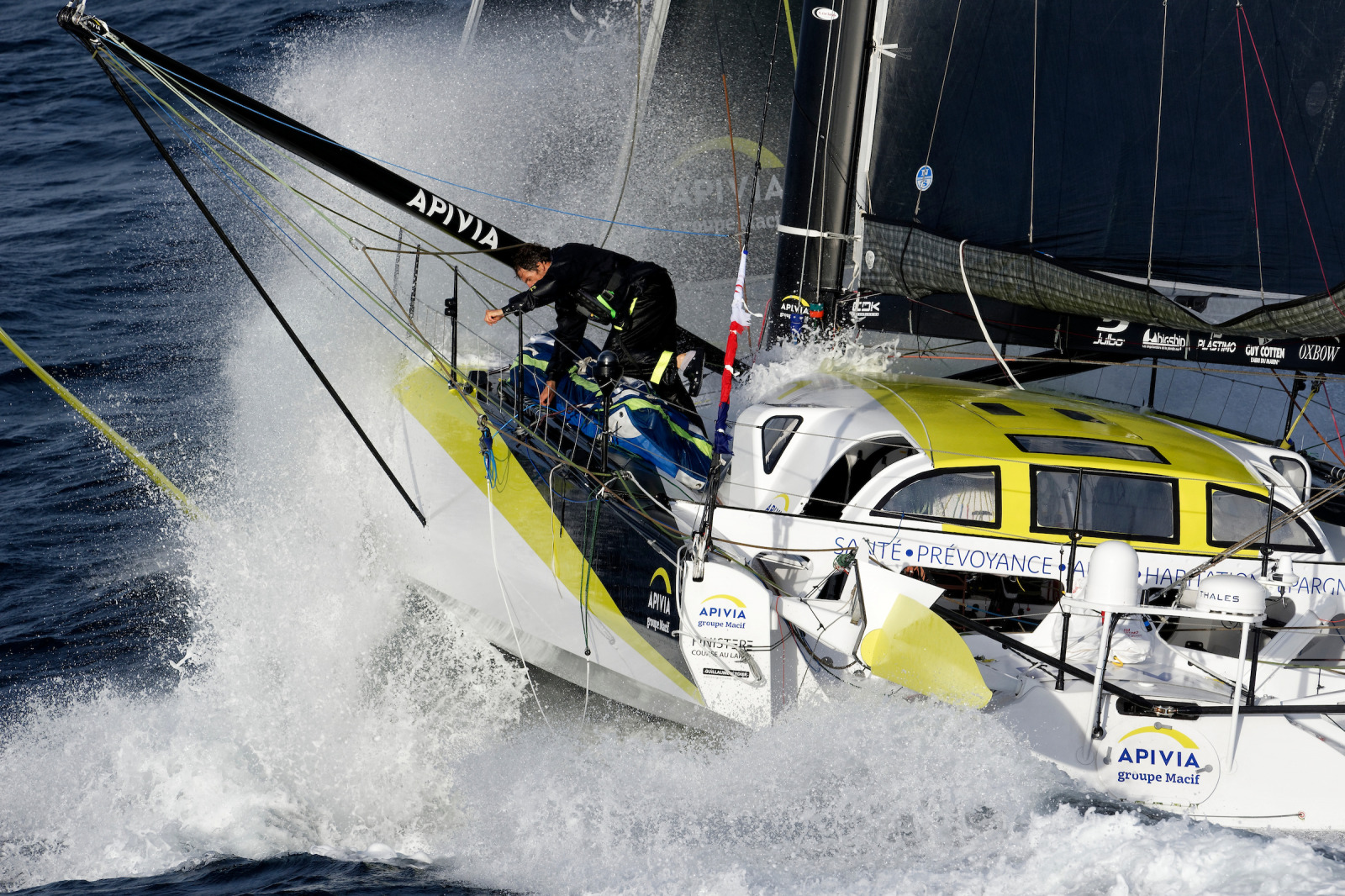 For a rookie Vendee Globe skipper 36-year-old Charlie Dalin from Concarneau in Brittany conducts himself with an impressive degree of composure and self-confidence.

One-on-one he is affable, open and easy to chat to, but watching him on the Vendee Globe press conference stage in Paris alongside – well actually, at an appropriately socially distanced away from – his fellow solo, non-stop, around-the-world race aspirants, his body language made it clear he has absolutely no doubts in his mind that he belongs up there.

The story of Dalin’s route to becoming a Vendee Globe skipper can be broken down into a series of mini-apprenticeships – each of which has added to his skill and experience levels.

Since he earned his degree in naval architecture at Southampton University in 2006 Dalin’s only interest has been ocean racing. He cut his teeth in the Mini Transat Class, where he finished second in 2009 in the La Rochelle to Salvador de Bahia race, before in 2011 joining the Finistère Offshore Racing school in Port La Forêt to accumulate the skills he needed to compete on the legendary French offshore proving ground that is the Figaro circuit.

Over the next few years he racked up an impressive series of results, including winning the 2012 Transat AG2R La Mondiale (alongside Gildas Morvan), and being crowned French Elite Offshore Champion in 2014 and 2016 (he was second in 2017, by the way).

Much of that success came while Dalin was part of the Macif Skipper – a programme created to nurture the careers of promising young skippers on the Figaro circuit. This was a relationship that – largely due to his impressive racing performances, one imagines – in 2017 he managed to parlay into a Vendee Globe campaign with a brand new state-of-the-art foiling IMOCA 60 – all backed by Macif company Apivia Mutuelle and managed by the Mer Concept organisation run by Vendee Globe 2012-13 winner Francois Gabart.

Between then and now both the boat and the skipper have been impressive, pulling off an unexpected Transat Jacques Vabre transatlantic victory at the end of last year (with Yann Eliès as co-skipper) and a second place in this year’s recent solo Vendee Arctique Les Sables D’Olonne qualifier/warm up race.

I kicked off our conversation – happily, Dalin speaks near perfect English – by asking what the Apivia team still had left on the job list at this stage with the start of the Vendee Globe just weeks away now.

“I feel like we are on schedule and we will be ready for the start,” Dalin said. “We have just have a few details to sort out before then, but I’m happy that all the big jobs, the big tasks, are done and everything on the boat is tested and working. So now we have a list of small details to sort out. That job list is still long, but they should all be easy tasks to do with things like on board comfort.”

As a first time Vendee Globe skipper hoping to be in the mix at the front of the fleet Dalin knew all too he would need to rack up the open ocean miles if he was going to stand a chance of hanging in there with veterans like Jérémie Beyou, Alex Thomson, Jean Le Cam, and Samantha Davies.

The Covid 19 pandemic lockdowns kept all the boats off the water for a time but impressively Dalin says he is only a few thousand miles short of the goal he set himself when the boat was launched last August.

“Given that our plan was to have completed as many miles as a complete around-the-world cycle, the fact that we are going to be roughly a transatlantic crossing short of that is not too bad.

“I think the miles we have done will be enough. I feel like for a new boat we have plenty of miles under our best and that Apivia is trialled enough and I am feeling confident to go around the world with the boat as it is.”

To eliminate as much risk of not being able to compete as possible, Dalin plans to go into pre-start quarantine a little earlier than the race rules require.

“I will quarantine a bit longer than what the organisers want. We have a test on the Friday before the start and if you are positive then that means no race. That’s something I don’t want to even contemplate.

“That means I will probably say goodbye to my son and my family as much as five days early – although my wife will stay with me until the start day on the Sunday, but she will be the only person who will.”

This upcoming edition of the race – which is scheduled to start from the French Atlantic coastal town of Les Sables D’Olonne on November 8 – tis shaping up to be a very exciting one to follow – particularly the battle between the eight new-build foiling boats – which as Dalin points out are really the true ‘first generation’ foiling IMOCAs.

“We know that this is the second edition with IMOCAs fitted with foils but for me these are the first generation one foils,” he said. “Because, although the concept was validated last time, the designers have really been able to embrace the concept this time around.

“Also, in the two previous editions all the new boats were designed by the same group of architects – VPLP plus Guillaume Verdier. So the boats were different but also very similar in many ways.

“Now, because they have stopped their collaboration, this has opened up the possibility to have different designers – in fact we have four different ones between the eight new boats – and that has resulted in a very, very broad range of designs and philosophies.” 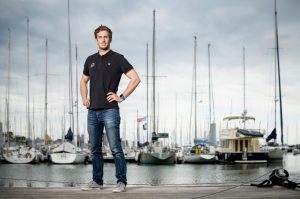 Dalin believes that for the next edition in 2024 the designs will converge around what turns out to be the best solution from the 2020–21 race.

“That makes it exciting to everyone, I think,” he said. “If you compare two Formula One cars then 99 per cent of the population would think they look exactly the same apart from the branding – even though they are probably very different.”

“But even someone who is not following sailing and who has never seen a yacht before – if they walk around the boats they will be able to clearly spot the differences between them.”

Life on board for a Vendee Globe skipper has never been associated with luxury living or any sort of creature comforts, and, as we heard from the foiling skippers on the last edition, the advent of the higher-speed foiling IMOCA 60s made things even tougher for the skippers.

No surprise then that early on in the design process of his Apivia IMOCA 60 Dalin was lobbying for an enclosed cockpit to keep him protected as much as possible from the elements.

“When we were designing the boat and I first saw the size of the foils we were going to build – when we drew them out on the ground – I thought to myself, ‘Wow that’s serious!’

“So from the beginning I knew what we were going into and so I pushed my design team on the idea of an enclosed cockpit, because I felt like I needed a bigger protection than before. What we have is a bit like what Alex [Thomson, Hugo Boss GBR] has gone for but a bit more of a compromise.”

Nevertheless it is hard to find the appeal in Dalin’s description of life on board when you are in foiling mode at high speed.

“Aside from the fact that obviously we don’t have showers or toilets and I only have a little camping stove to heat my food, life onboard is mainly lots of noise, lots of impacts,” he said.

“The problem with the impacts is that you cannot predict them like on a normal boat. On a normal boat you go up a wave and then you know you will come down, but on these boats you just don’t know when the big impact will come.

“You are often taken by surprise, even though you spend much of your time braced waiting for the next big impact to come. Sleeping will be a big issue. We will be able to sleep but the challenge is how to make it quality sleep because all these impacts do not make it easy.”

In terms of dealing with the noise Dalin confessed he would be taking as many options as possible with him for the race.

“I have active noise cancellation [headphones], I have ear plugs which are custom moulded to the shape of my ears, I also have standard low-tech ear plugs – so everything I can think of that might help.”

Given the thoroughly environment he will be required to survive in during his lap of the planet it is no surprise that Dalin has been majoring on the medical training aspect of his personal preparations.

“I have had a lot of specific medical training,” he told me enthusiastically. “I have learned how to repair wounds with stitches, put in staples or use special glue. I am also carrying specific intravenous medicines and I have been taught how to inject myself directly into my veins.”

Much is made in professional ocean racing of the art to knowing when to push hard and when to throttle back to protect the sailor and the boat. Never was that more true than in a solo around the world race like the Vendee Globe where assistance from a third party results in instant disqualification.

But how easy is it to throttle back on a foiling IMOCA 60 – even if you want to?

“It is always possible to slow down,” Dalin reassured me. “You have different options like retracting your foils or easing the sails bit – so I’m not too worried about this aspect.

“But what I am worried about is: I know how to be really quick, but the question is how to find the equilibrium between going really fast but also managing the boat and keeping it in one piece for a race which is this long.

“That’s a very fine line to navigate around for such a long time at sea.”

Dalin may be going into this edition of the Vendee Globe as a rookie skipper, but his entire career so far and his specific preparation for this race mean he is far from just there to make up the numbers or gain some more experience.

I asked what goal he had set himself for the race.

“Just one goal,” he told me, speaking quietly and leaning in. “Finishing before the second boat.”