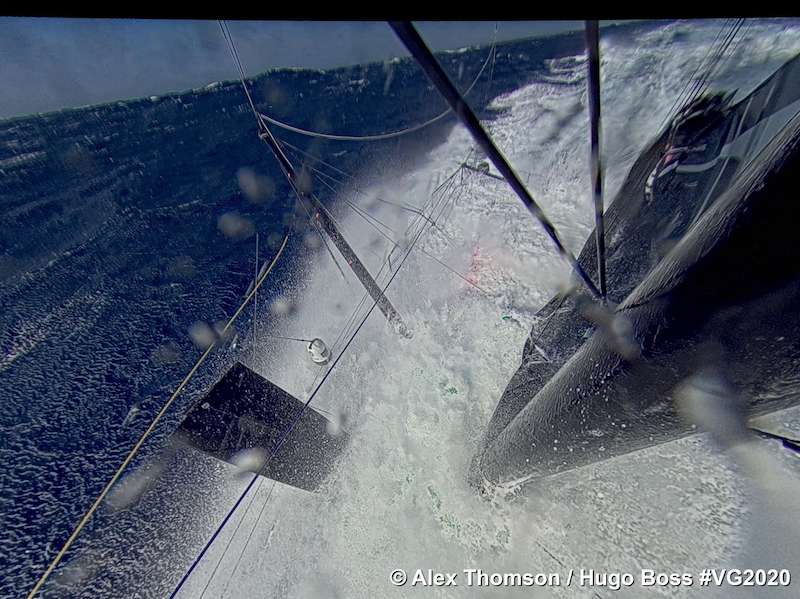 Passing 250 miles west of the Cape Verde islands during last night Alex Thomson has the accelerator down on HUGO BOSS on the fast flight south trying to extend on the Vendée Globe rivals who are chasing him.

Flying downwind at average speeds of more than 20 knots, HUGO BOSS is more than 75 nautical miles (nm) ahead of Jean Le Cam and 139 nm up on third placed  (LinkedOut).

Overnight the British skipper has largely held his margin on the hard pressing peloton although Charlie Dalin (Apivia) who has miles to catch up after a conservative option at storm Theta– joking yesterday ‘hold on lads I am coming I am putting on more coal – made the greatest overnight miles at 144 nm compared to Thomson’s 141 nm.

True to his word Dalin is up to fifth this morning and is within seven miles of fourth placed Kevin Escoffier.

The foilers are now on the ascendancy among the top 12. But Le Cam is hanging on impressively in second but the foilers will gain at least 50 miles on him in each 24 hours. With three days to the Doldrums though it is far from over for the 61 year old. But there are now only three daggerboard boats left in the top 12.

Life is not pleasant at more than 20 knots in these trade winds conditions, even though the seas are not big, the boats slam constantly and the din inside the largely hollow carbon hulls can be insufferable.

Yannick Bestaven on Maître CoQ IV is in tenth and pressing hard to stay with the newer, faster boat reported to his team.

“Can you hear how the boat is whistling? I’m under FRO and full mainsail high! I’m heading straight south at 23 knots towards the Doldrums. It is the full fast downhill schuss due south with this well established trade winds which will get stronger further.

“You don’t have any other option than pulling out all the big gear to keep up with the big foilers as much as possible. Yesterday, after my sail changes I made a full inspection of the boat. I went through everything from front to back. Everything is watertight and a watertight boat is good news. Everything is nickel.”

And the races within the race are evolving, at more than 800 miles behind Thomson, Ari Huusela (STARK) and Miranda Merron (Campagne de France) are racing within four miles of each other on their similar Owen Clarke designs, with Alexia Barrier (TSE 4 My Planet) about 40 miles behind.

Didac Costa (One Planet -One Ocean) and Pip Hare (Medallia) are separated by 25 miles west east but Pip leads Didac by 11 miles, two of the race’s most historic boats side by side – Bernard Stamm’s former Superbigou leading against Ellen MacArthur’s Kingfisher.

Merron said this morning: “I am having a great race with Ari on Stark and we have a few other playmates not far behind, just because we are a little further back does not mean we are not racing hard. I’ve had a pretty good night with up to 20 knots of wind but now it is dropping and it looks a little complicated and I can see there are rainclouds on the radar so

“I do need to concentrate on making the boat go faster. It is transition day today between the two lows. It will be slow and light. Much to my surprise and despite the technical difficulties I have had, I have been in a pretty good mood the whole time and I have never had a sense of humour failure which I can only put down to my advanced age.”