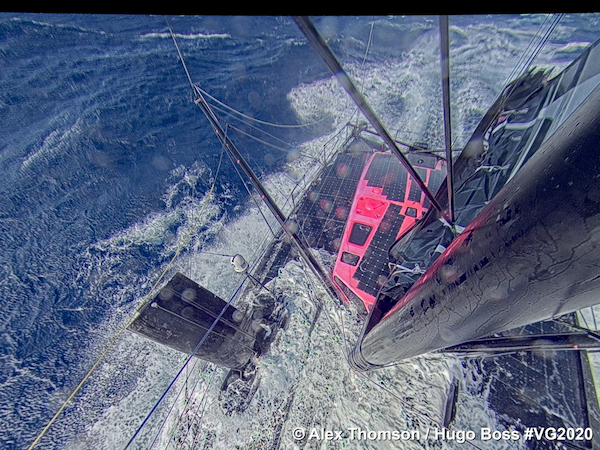 Some 500 miles west of the Canaries Alex Thomson on HUGO BOSS is in recovery mode and looking forwards to finally getting into a more acceptable sleep regime and hopefully drawing a reward for his audacious, but measured passage through storm Theta.

Thomson confessed to have switched to survival mode at times while negotiating the intense storm which he said had generated waves as high as six and a half metres.

“It was not very pleasant for sure,” he said. “I would agree with the forecast that was given, so very windy and big seas, very gusty, not a very pleasant place to be. I saw gusts to 60 knots and sustained winds of 50 knots for many minutes.

“You go there to be efficient to get through the low pressure, but as soon as you get near these kind of conditions, you just need to survive and not have any problems.”

This morning Thomson was racing in 15 knots of north northwesterly breeze and anticipating a day of downwind sailing.

“Right now I have 15-20 knots from north north west, the seas are two metres and it is a nice night with some stars,” he said on a call during the night. “There will be a gybe at some time to start heading south, probably some dinner and start catching up on some sleep, I have been looking forwards to this.”

The only unexpected aspect to Thomson’s current scenario is that French veteran Jean Le Cam is nominally only two miles behind and sailing at speeds pretty much matching the black British yacht.

However Thomson has gained separation, gradually easing out some 55 miles to the west of Le Cam’s more direct southerly course.

The French legend will have had a little more wind pressure than Thomson overnight and is sailing the kind of smart, smooth trajectory he has long since been known for.

“To be where he is with that boat, at his age, it is unbelievable, brilliant.” Thomson said on this morning’s radio call.

The same might be said of the 30 year old Vendée sailor Benjamin Dutreux who is third on OMIA-Water Family. His is a project campaigning to preserve water resources and to provide water resources in areas where they are needed most, the catch line being ‘Du Flocon A La Vague’ – from the snowflake to the wave.

His boat was Thomson’s Farr design on which he finished third in 2012-13. A canny Figaro racer and Tour Voile sailor Dutreux on his easterly routing has still ten miles or so in hand over the foilers.

Thomas Ruyant (LinkedOut) continues to impress with his nicely balanced routing and is fourth, as does Sam Davies in eighth on Initiatives Coeur.

Meanwhile, Jérémie Beyou who is having to return more than 600 miles to Les Sables d’Olonne with technical problems should come into the channel around 1230hrs local time today and is expected to receive a warm welcome.