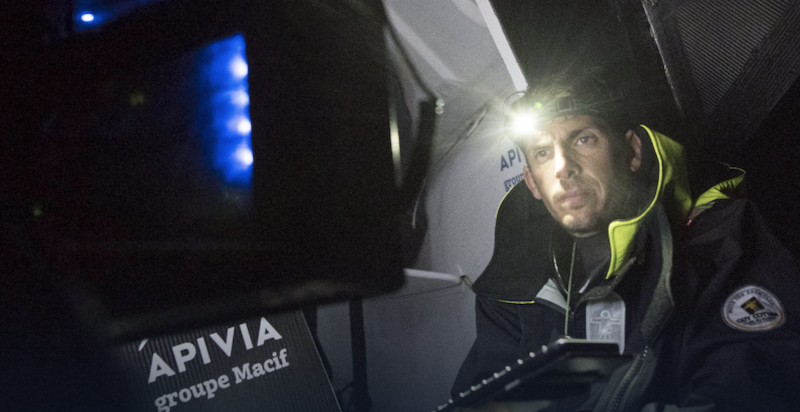 Vendee Globe race leader Charlie Dalin had a tough night as he rode out the biggest depression any of the fleet has encountered so far but in a brief report to his shore team said that all is well on board his Apivia IMOCA 60.

Dalin should soon be through the worst of the storm which was packing 45 knot mean wind speeds spiking up to 55 knots in the gusts. Take a look at the video he sent back from the boat for a taste of what that looks like.

Dalin, who at 1100 UTC today has a 259-nautical-mile-lead has remained composed and focused throughout. Behind him Thomas Ruyant (LinkedOut) endures the same battle, Louis Burton is moving better again, now back in third on Bureau Vallée 2, 80 miles behind Ruyant.

Dalin been in close combat with the low-pressure system since yesterday afternoon, describing it as: ‘the worst storm I have seen since the start’. Along with the rest of the fleet the leading solo skipper has been closely monitored by the race management team at Race HQ in Les Sables d’Olonne. The staff work shifts, constantly monitoring the moving pixels, dots across their screens, and the evolution of the weather forecasts.

With his foils retracted as much as possible Dalin has stuck to his plan – sailing at 17 knots yesterday evening then 13.9 knots in the storm.

“Charlie has respected his initial plan to the letter: keep get east as much as possible to avoid the worst of the low which is centres this morning 200 miles to his south, explained race director Jacques Caraës. “The wind shift into the west will take place this morning. and it will ease very slowly.”

In second place Ruyant on LinkedOut gybed in the dead of night at 0200 UTC. He is 120 miles further north than Dalin and so experienced the storm’s westerly shift earlier than the leader. Ruyant also did everything to protect himself, he was making progress at 14 knots in the early morning hours.

Behind them and now in south westerly winds of 25 knots progress has been good for the pursuing group.

The good news for Louis Burton on Bureau Vallée 2 is that he is back up to speed at 18 knots after pausing to resolve his own boat issues and has regained third place from Yannick Bestaven on Maître CoQ IV has been doing 15 knots. Meanwhile, Damien Seguin on Groupe Apicil) has seemingly recovered from two days fighting autopilot problems is back to race speed and has turned south, followed closely by Boris Hermann on Seaexplorer – Yacht Club de Monaco.