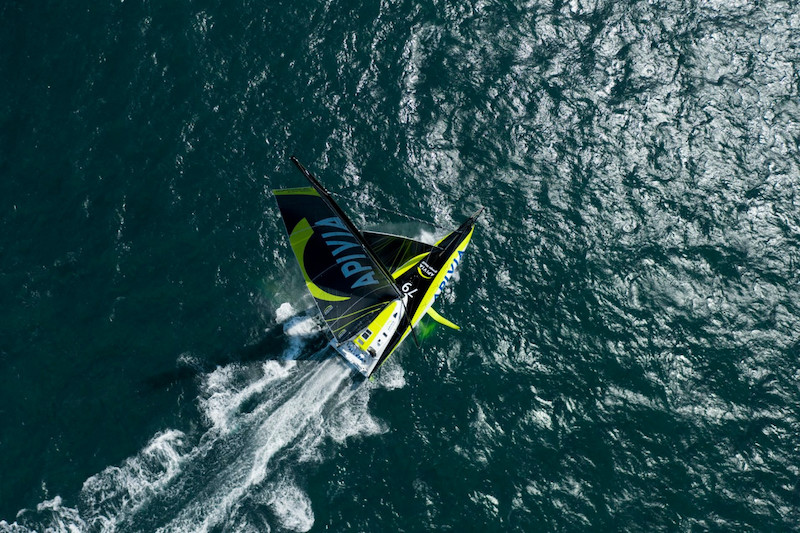 Vendee Globe leader Charlie Dalin on Apivia says he has been sailing in full ‘inshore mode, fighting for every metre,’ as he tries to break through to a Southern Ocean low pressure system which could catapult him eastwards towards the longitude of the Cape of Good Hope, which the leaders should pass during the night on Sunday and into Monday morning.

For all of the predictions that the fast new generation foilers would surely break Armel Le Cléac’h’s 74 days three hours record, on this schedule they will already be four days behind the pace of the 2016-17’s race.

In fact Dalin is on the same stretch of South Atlantic which yielded a 24 hour ‘record’ for Alex Thomson in 2016-17 but which could not be validated because he did not break it by one full mile. The 36-year-old solo skipper of Apivia observed wryly today:

“I had expected this stage of the South Atlantic to be one of the fastest sections of the round the world race. And I am missing out.

“I imagined the South Atlantic to be the fastest round-the-world zone, and well it’s missed,” he said.

“I think this is one of the biggest challenges I have had right now, I work at the routing, I watch the wind shifts on the forecasts and sail by feel in terms of the wind I have at the moment and in front of me.

“I am not strict with any one model or idea, I try to take into account all the different parameters to pick my best course and where to gybe. I’m happy, we’re doing well, but these coming days are set to be full of manoeuvres, sail changes and strategic thinking as I deal with a rapidly changing dynamic situation.

“We should get into the stronger winds in about 48 hours, so I’m setting up for that.”

Dalin has done well against his French rival Thomas Ruyant, constantly eking out miles on Ruyant to be some 70 nautical miles ahead of LinkedOut.

Jean Le Cam maintains his third place, still outpacing a posse of younger foiling IMOCAs on his 2007 Farr design. On today’s “Vendée Live”, speaking to his friend Roland ‘Bilou’ Jourdain, Le Cam was typically phlegmatic on the subject of age.

“People must be thinking ‘Oh heavens Le Cam is old’, but at the moment it is all OK,” he said. “The boat is from 2007 and it doing so well and I am getting on well with it. The issue about being old is that the older you are the more experience you have.

“The more silly things you did when you were younger the more you learn what not to do. There are plenty of older people who have lots of great talents and good values who end up without a job after 50. In my case here I am over 60, and so it is a shame for all these other people who can’t get jobs because they are ‘older’.

“But you get daft young people and silly older people alike. If I had to employ someone I would prefer to get an older smart experience person than a younger one who is maybe not so smart.”

Behind Le Cam in fifth and sixth Yannick Bestaven (Maitre CôQ IV) and Germany’s Boris Herrmann (SeaExplorer-Yacht Club de Monaco) were racing within sight of each other just a couple of miles apart.

Sam Davies (Initiatives Coeur) and Louis Burton (Bureau Vallée 2) have both broken away from this group, gybing onto a more direct southwards track to try and catch the eastbound train of stronger breezes earlier but from a position further back to the west. At the moment current routings have the peloton two days behind at Cape of Good Hope.

The Doldrums remain active and frustrating for the group of seven IMOCAs near the back of the fleet. Finnish airline pilot Ari Huusela (STARK) was trying to remain cool and focused after being kept in a holding pattern by very light and changeable winds which he today said had taken him on at least one full 360 degree turn.

Nearby Miranda Merron (Campagne de France) finally found out why her boat had been slowed, discovering a plastic bag round her keel. In the same area of the Doldrums Sébastien Destremau has been wrestling with a complete loss of hydraulic oil pressure in his keel ram which has left the head of his keel swinging free. He was looking to cannibalise another piece of piping to repair the cylinder leak and meantime had reported he had temporarily secured the keel.

Meantime Alex Thomson continues to complete his repairs to Hugo Boss and is now in eighth place this evening – 550 miles behind Charlie Dalin. The British skipper remains steadfastly upbeat considering the structural repairs he has had to make to an area just behind the bow, the silver lining being the benign conditions, just what the leader Dalin was today complaining about.