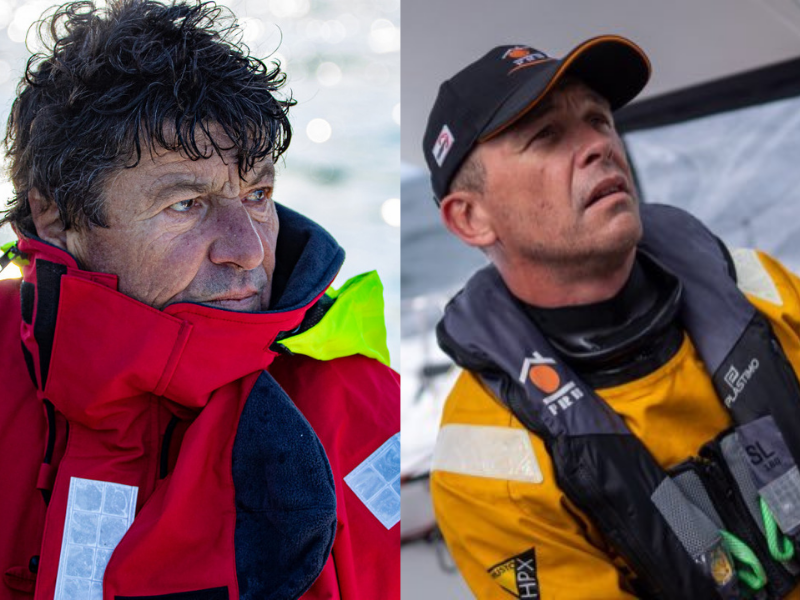 French skipper Jean Le Cam has successfully rescued fellow Vendee Globe competitor Kevin Escoffier from a liferaft in the Southern Ocean after Escoffier had to abandon his sinking IMOCA 60 PRB.

Escoffier had been in third place in the solo around-the-world race before alerting his shore team to having experienced “an ingress of water” to his 60-foot yacht and soon after triggering his emergency satellite beacon to request urgent assistance.

Le Cam arrived at Escoffier’s last known postion around 1600 UTC and was able to locate Escoffier in his life raft. However, despite making visual and verbal contact Le Cam subsequently lost sight of the liferaft while manouvering his boat in fading light and windy and wavy weather conditions.

Le Cam along with the other three skippers began a coordinated grid search of the area Escoffier was calcualted to be located. Then at 0118 UTC the news came through that Le Cam had Escoffier safely on board his Yes We Cam IMOCA 60.

Reportedly Le Cam spotted Escoffier in his liferaft while motoring slowly northwards. Despite operating in darkness, 25 knot winds and two to three metre seas he managed to get alongside the raft and take hold of its tow line.

Getting Escoffier from the liferaft to Le Cam’s boat in his survival suit was not a straightforward manouvre and Escoffier is reported to have nearly fallen back into the ocean and had to be manhandled aboard by Le Cam.

Soon after, the Vendee Globe race management team breathed a sigh of relief when Le Cam appeared on the life video feed at his chart table with a reportedly smiling  Escoffier behind him.

Le Cam is no stranger to Southern Ocean rescues having himelf been plucked from the Southern Ocean during the 2008-9 Vendee Globe after his VM Matériaux yacht turned upside down.

Back then France’s Vincent Riou racing a previous PRB yacht had to winch Le Cam on board after he swam out of the stern hatch of his stricken yacht’s upturned hull around 200 miles west of Cape Town.

With Escoffier safe on board with Le Cam the other three assisting skippers have returned to racing. An International Jury will evaluate the events which have unfolded over Monday and Tuesday morning to rule on how they wil be compensated for the time lost during their rescue efforts.