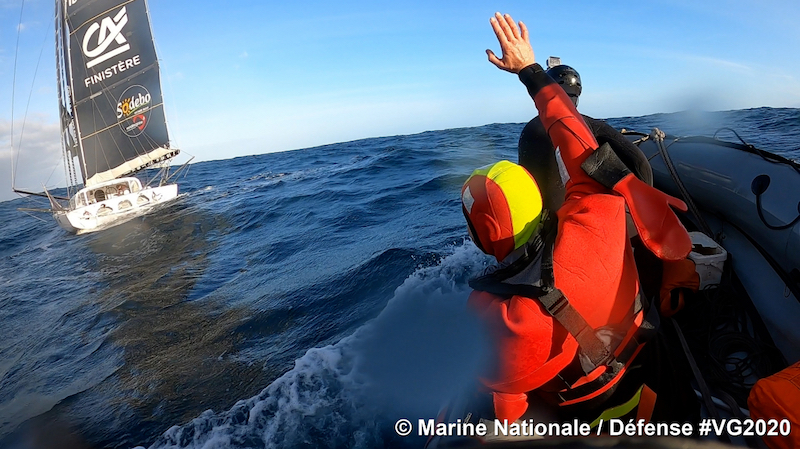 French skipper Kevin Escoffier has made a successful mid-ocean transfer to a French Navy vessel deep in the south Indian Ocean around a week after being rescued from a liferaft in the South Atlantic by fellow-Frenchman and Vendee Globe competitor Jean Le Cam.

The transfer took place 0200 UTC around 360 miles north of the remote Crozet archipelago and involved Escoffier donning his survival suit  once more before jumping from Le Cam’s Yes We Cam IMOCA 60 to swim a navy RIB which ferried him to the nearby Nivôse – French Navy frigate which operates in the region from Port-des-Galets on the west coast of Réunion Island.

35-year-old Escoffier had been on board with Le Cam since November 30 when he scrambled aboard from his life raft, 11 and a half hours after abandoning his own boat when it spectacularly broken up while surfing a speed down a large wave. 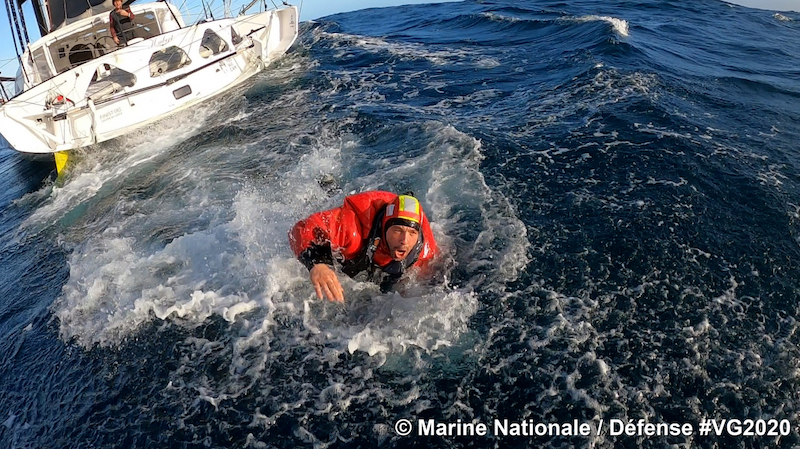 Before the rescue the 61-year-old five-time Vendee Globe competitor was in fourth place in the 33-boat fleet. Under the rules of the race should be compensated for the time he lost while searching for Escoffier and today’s stop.

Meanwhile aboard the 93.5 metre, 2,600 tonne Nivôse – a Floréal-class frigate manned by 84 sailors – Escoffier is at the start of his long journey home to France to be reunited with his wife and children,

In a message to the Vendee Globe race management team the captain of the Nivôse, Frédéric Barbe said: “Kevin is in great shape, he is going to enjoy a hot shower. We are heading for Reunion Island. It is the start of beautiful day.”

and its main missions are the surveillance of maritime areas under French sovereignty in the Indian Ocean (Reunion, Mayotte, the French Southern and Antarctic Territories) and the fight against illicit activities at sea. It is based in, Nivôse is 93.5 meters long, 14 meters wide and has a displacement of 2,600 tonnes.