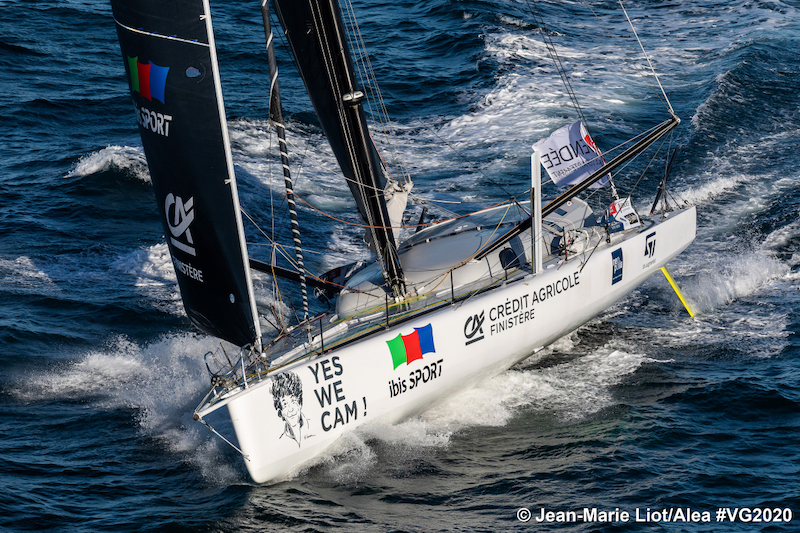 Britain’s Alex Thomson leads the Vendee Globe by some 26 nautical miles this afternoon, first to deal with the worst of storm Theta at some 250 miles south of the Azores.

The British skipper took HUGO BOSS as close to the centre of the system as he considered prudent, before a difficult gybe in around 40 knots of wind and five metre seas around 1330hrs this afternoon, a move which should see him gain significantly on all but the French veteran Jean Le Cam who took a similar track.

The reward for the extra risk is sailing fewer miles than the rivals who are chasing him is being slingshot out of the low in strong north and north westerly winds which, all going well, should net him a significant miles on his fast foiling rivals.

Thomson’s nearest pursuer is 61 year old Le Cam whose ocean racing history dates back to the 1980s and who won La Solitaire du Figaro three times and finished second in the Vendée Globe in 2004-5. He is sailing a 2007 launched boat with conventional straight daggerboards and leads all of the latest generation foilers other than the radical black HUGO BOSS.

Le Cam is more than twenty miles up on the third placed Nico Troussel on CORUM L’Épargne.

“I see them behind me these foilers. But as long they are there “papy fait de la resistance” (literally “grandpa resists” ed note a 1983 french film)! I am 70 miles from the centre of the Theta depression. I am under mainsail alone, I am waiting to see what I am going to do. I always say, do not confuse speed and haste.

“Here I am calm, the wind rises gradually, it is useless for me to have up sail I won’t need in half an hour. That’s the worst thing, you put it up you put it down put it up.”

Asked on the Vendée Globe LIVE show today about his passionate public following in typical Le Cam style he quipped, “I’m glad people are with me because this is not an easy adventure. And here I am. I can’t not be happy! If I’m not happy there, then I’ll never be happy! So I’m happy. I ate a cassoulet this morning,

“I found the cassoulet to go well with a depression. It does not go with the high pressure but rather with the depression. This is our culture in Brittany. Otherwise, I have sweetbreads to make, but I’ll wait a bit.”

“This is the first hors d’oeuvre of this Vendée”, was Kito de Pavant’s description of storm Theta during the Vendée Live programme. De Pavant is a three times a Vendée Globe starter who has not yet finished and who had to be rescued in the Southern Ocean by the Marion Dufresne supply ship during the last edition. Seeing the pace and passion of his friend and many times adversary Le Cam. De Pavant teased, “Maybe there is still a place for old people!”

Strategies for Theta vary all the way through the fleet. First timer Clarisse Cremer on Banque Populaire X admitted to being freaked out by it. Louis Burton today said he would play it safe, setting his cursor where he feels comfortable between speed and safety. And then are those who keep smiling, like Kevin Escoffier, busy manoeuvring further west in 30 knots of wind at midday.

“Water started coming into the boat just before I gybed at the depression,” Escoffier said. “Here we go again! It took a fair bit of time to empty everything; the pumps are fast but it still took me 2 hours. When you discover that, after taking a little nap – well, let’s just say there’s nothing like it, it definitely wakes you up!” he says, laughing.

“I’m currently sailing in 30/35 knots, sailing downwind. I’ve given in to losing a bit of speed so that I can shift a little to the west and remain in control. I’ve moved away from the optimal route, but I’m going to sail as well as I can.

“Alex and Jean are making a very good start to the race. I made the decision to hang back a little and I’m not alone. Charlie gybed again this morning for the same reasons. I completely understand what Alex and Jean are doing, but everyone has their own path to take. These are never easy choices.

“I’m going to come out of the depression early tonight. I am happy with my start to the race. This is my second solo regatta and I’m trying to do it right. I’ve stayed in contact with good boats with good skippers at the helm. I’m proud of that no matter what happens afterwards.”

Meanwhile some 300 miles to the north east, back up the track Miranda Merron and Didac Costa were among those stuck in the light winds and oily seas.

And true to the Vendée Globe’s requirement to fix at least one thing a day, Sébastien Simon (ARKEA PAPREC) took advantage of being close to the Azores to climb to the top of the mast without succeeding in completely solving the problem (damaged wind vanes).

Maxime Sorel has been dealing with autopilot problems. And Louis Burton transformed the Bureau Vallée 2 saloon into a “composite workshop” to repair a crack in a bulkhead. “I’m apprehensive the next time we go upwind in heavy seas,” he explained.