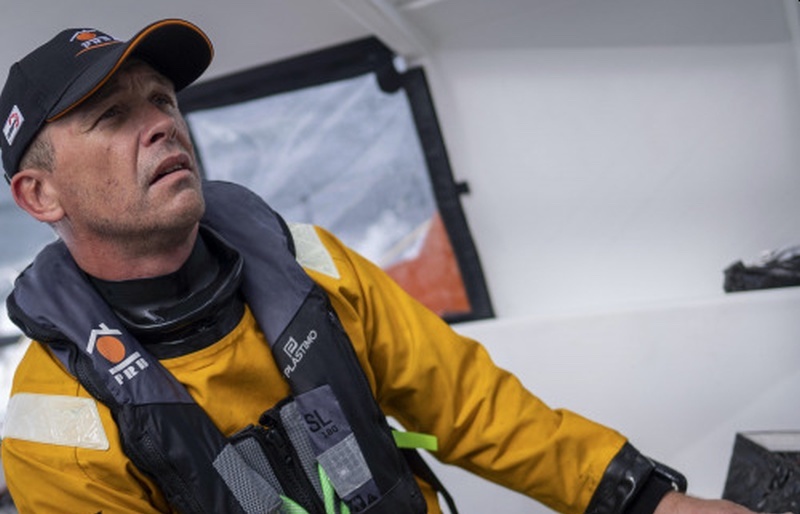 Four Vendee Globe skippers are tonight carrying out a coordinated search in the Southern Ocean for fellow competitor Kevin Escoffier who earlier today took to his liferaft after abandoning his flooded IMOCA 60 PRB.

Escoffier was racing in third place in the solo non stop around-the-world race around 840 nautical miles south west of Cape Town when his yacht got into difficulties and he was forced to take to his liferaft.

He alerted his technical team at 1346hrs UTC this afternoon, telling them he had significant amounts of water coming into the boat and triggered his distress beacon. PRB was positioned at 40deg55S 9deg16E at the time the distress beacon was activated.

Le Cam arrived on scene around 1615hrs UTC and quickly established visual and voice contact with Escoffier in his liferaft, but was unable to retrieve him in five metre seas and 20-25 knot winds.

As he was manoeuvring to prepare to get closer to the liferaft Le Cam lost sight of the liferaft and could not establish radio contact nor to pick up the signal from the AIS the range of which was reduced by the heavy seas.

He lost sight of Escoffier in the dying light but has continued to try and locate him, Le Cam is communicating regularly with Race Direction and the rescue authorities. The three other skippers are now in, or are approaching the search area.

The four skippers will follow a protocol established by Race Direction in coordination with Le Cam. They will approach with three reefs in the mainsail and the engine idling. A grid search area for the zone has been established which will be covered by the four boats.

Escoffier’s personal beacon – AIS MOB (man over board) – emits HF radiowaves and can only be detected in the local vicinity. However, the PRB shore crew say that other than his AIS Mob, Escoffier also has means to signal his presence in the liferaft.

Sunrise in the region tomorrow morning is around 0340hrs UTC.