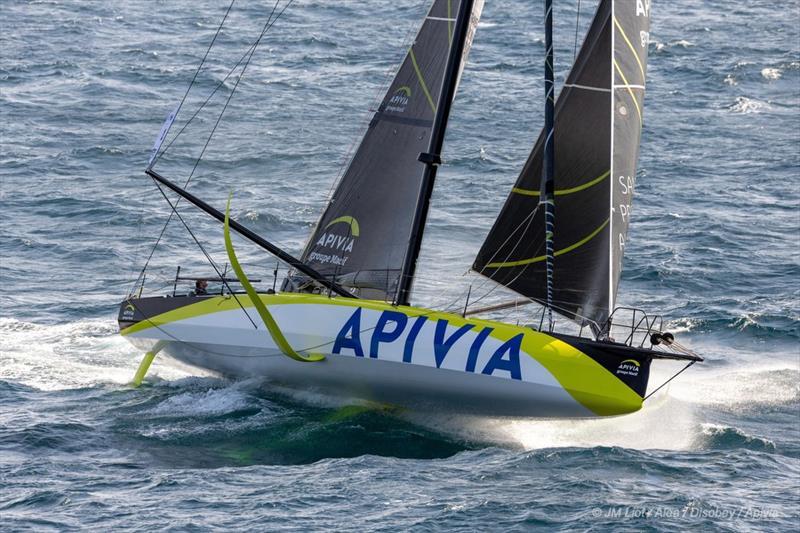 With second placed Thomas Ruyant (LinkedOut) busy most of yesterday completing surgery to his port foil and scaling his mast yet again to sort out various halliard issues, Vendee Globe rookie skipper Charlie Dalin (Apivia) has eked out a 200 nautical miles lead over the 32 boat Vendee Globe fleet.

Dalin’s yellow hulled Verdier design is at the gateway to the Roaring Forties this morning and should pick up speed eastbound over the course of the day. Meantime Ruyant nearly 170 miles to the north still slowed in the South Atlantic high pressure.

Ruyant said this morning: “It was a busy night trying to get out of the centre of the anticyclone and to the south where I will be soon I hope. It is all good and sorted on board. Yesterday morning I climbed my mast to finish sorting the little problem at the top of my mast and got to work on my port foil.

“I cut a bit to limit its power. It was quite fragile, it was cracked. And so we took the decision to reduce the power. There is a bit left that comes out the hull. But it is done, it is the Vendée and this is not my specialism. It was not easy. I cut two metres from the tip.”

Meanwhile Alex Thomson was also slowed through yesterday evening relative to the boats around him and as a result Hugo Boss is twelfth this morning. Thomson’s speed in the late afternoon and evening was 18-19 knots and then overnight 6-7 knots. At the same time Sam Davies and Louis Burton managed to pull miles back on Dalin by averaging 18 knots compared with the leader’s 10-12 knots.

Today and the weekend looks set to be crucial to the rest of the race, even though the leaders have covered only one fifth of the 24,295 nautical miles that make up this Vendee Globe course

At the front of the fleet, as the leaders light up in the stronger winds now at boatspeed averages around 20 knots, others will still be slowed in the sticky South Atlantic.

Note the temperature differential between front and back, Jérémie Beyou still has 30 degrees Centigrade in the Doldrums while leader Dalin is in fleece layers and hats in the first of the Roaring Forties. It’s currently 10 degrees Centrigrade at night and by the time he gets to the Kerguelens it will be barely three degrees Centrigrade.

The lead group have already seen their first albatross, but so too there are bird species when the sailors pass nearer land, petrels, terns and shearwaters close to the Nightingale Islands, Gough, Inaccessible, Trsitan de Cunha islands.

The skies are different, the stars are brighter and the light is more piercing, the sea darker and more threatening. This is the South.

The Roaring Forties now last a long time. From here to the exit at Drake’s Passage at the very tip of South America, there are 12,000 lonely miles between the yellow bow of Dalin’s Apivia – and Cape Horn. He is now well ahead of a peloton which now extends more than 1,000 miles back to Stéphane Le Diraison (Time for Oceans).

The Saint Helena anticyclone is still proving problematic for some, Ruyant and Jean Le Cam are the last to plunge south towards the Forties.

Three days ago, Louis Burton (Bureau Vallée 2) was the first to break south in an attempt to get out of the clutches of the High followed a few hours later by Britain’s Davies. Others followed on this curve, tracing the curve of the high pressure’s contours it’s anticlockwise wind fields.

Who is going to do the best? Those who are furthest south soonest, no question. As the high will finally be broken up by a depression finally rumbling south east from Argentina, pressing the high eastwards to Africa, those furthest to the south most probably will catch the eastbound ride, ahead of the front Davies and Burton, a few hours behind Sébastien Simon and then the Boris Herrmann–Kevin Escoffier–Yannick Bestaven trio a half day later.

As Ruyant, entangled in the last of the anticyclone he will see Dalin race away. And meanwhile Le Cam must wriggle south as best he can.

It will likely be early next week before the fleet falls into a formation, which – all things being equal – will reamin stable for the next month in the deep south.