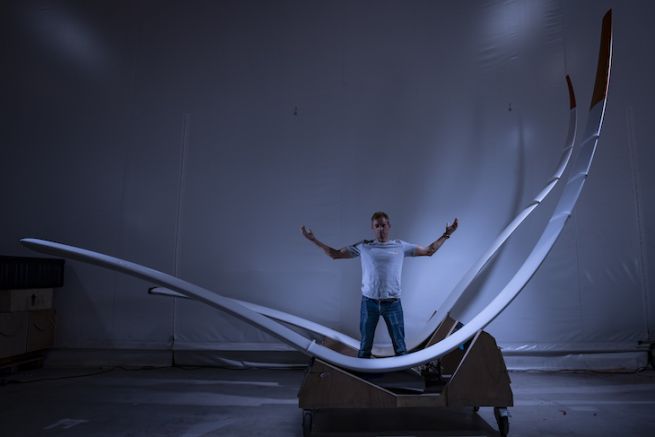 Seventeen days into the 2020-21 edition of the Vendee Globe solo nostop yacht race around the world and there has been no let up in the on the water action or the drama befalling some of the solitary skippers.

Writing exclusively for Yacht Racing Life past-Vendee Globe competitor Conrad Colman gives his expert insight into the happenings in this third week of the race.

Alex Thomson upended the race three days ago with the news that his brand new Hugo Boss had suffered significant structural damage. But unlike the common sequence of press releases where the first one announces a problem and is quickly followed by another announcing a retirement, Alex has fought on and appears to have resolved the problem after three days of cutting, grinding and glueing carbon sheet.

In addition to fixing the boat, he catalogued the experience in a series of videos here and here, but I would just like to underscore a couple of things from my personal experience.

While Alex was getting dusty in the forepeak, other sailors have been climbing their masts in an effort to either repair damage or do a final check before the rigours of the wild south.

Seb Simon has been battling recurrent problems with this mast-mounted wind instruments and has climbed several times to troubleshoot them and currently has them in pieces in the cabin.

While the boat is bouncing over the waves he’s attempting to do delicate soldering on hair-thin wires! I had to repair a circuit board while the boat was fully powered up four years ago and such precision work feels like doing brain surgery on the back of a camel! I don’t envy him.

Thomas Ruyant has been having a tough time of it lately, despite still being in second place.

Firstly, he has been sailing without one of his topmast halyards after a problem on the first night at sea. Recently he had another halyard failure and benefitted from the calmer conditions to climb the mast and feed new halyards through his lock mechanism and down into the mast.

As you can see the in the video, it’s hard work just climbing to the worksite 29 metres above the sea and I know from experience that it is hard to concentrate on being useful once up there as you’re out of breath, your arms are burning and you have to hang on for dear life to not get seriously hurt.

The breaking news of the day, however, is that Thomas awoke to a large bang this morning and saw that the structural shaft of his port foil is severely damaged. He doesn’t yet know the cause, but the consequences are certain. He will either have to chop it off or cast it loose to avoid it breaking under load later on.

Meanwhile, Damien Seguin amply demonstrated how difficult repairs can be at sea when a relatively minor task turned into a drama. He was doing a small repair on a piece of rope and slipped with his knife, plunging it into his arm.

All Vendée Globe sailors complete a specialised offshore medical training course but spare a special thought for Damien as he only has one good hand at the best of times (he was born with only one hand). Watch the video below for a great demonstration of guts and resourcefulness.

As I said in last week’s Yacht Racing Podcast, I consider the South Atlantic to be the single most challenging part of the race from a navigator’s perspective and this edition certainly hasn’t disappointed.

A couple of days ago it looked like the leading trio of Apivia, Linked Out and Hugo Boss, could slide down the eastern face of the cold front moving eastwards across the South Atlantic basin.

However, between the lighter than expected winds, and technical problems, they succumbed to the calms. Even Charlie on Apivia, the only member of the erstwhile leading trio to still be operating at 100 per cent has been caught in light, and increasingly unfavourably upwind conditions while those behind are catching a break. 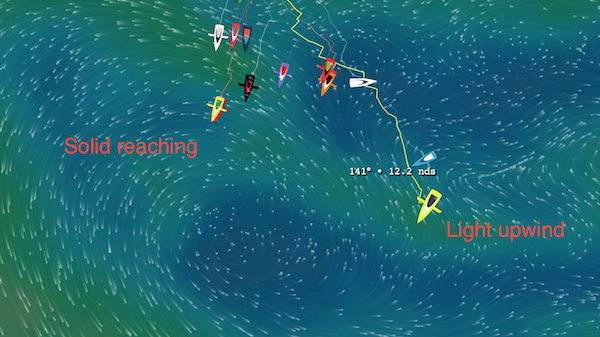 Louis Burton and Sam Davies, now followed by Alex Thomson and Seb Simon have abandoned the route towards Cape Town completely and are investing in getting south and into the new wind coming from a fast-approaching depression rushing in from Cape Horn. 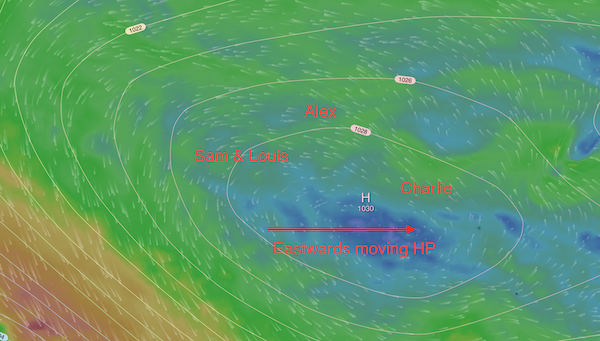 The forecast above is for tomorrow morning (Thursday November 26) at 1000 UTC and clearly shows that the western group will be already in increasingly fresh northerlies that preface the low which should allow them to finally turn their bows westwards, where they’ll have a crucial few hours charging towards the leader who will still be nursing his boat through the calms.

Main image (pre-race): Thomas Ruyant with the Version 2 foil he used for the Vendee Globe.