On the day that Vendee Globe race leader Alex Thomson aboard his sleek black state-of-the-art IMOCA 60 Hugo Boss crossed the equator and made his way into the southern hemisphere, Kiwi skipper Conrad Colman shares his insight on the happenings of the fleet’s second week at sea.

I delayed writing this post to see what would happen in the doldrums, but this year’s passage through the meteorological minefield appears to have been dispatched with such efficiency that it was barely a bump in the road and certainly didn’t figure in any upsets or changes in the rankings.

Think back to 2012 when Tanguy de Lamotte was stranded in calms for so long he jumped off his boat for a swim and a selfie.

History is full of stories of sailors through the ages starving of hunger, dying of thirst and jumping overboard (before selfies were a thing) as the boats drifted listlessly, completely becalmed. To see images of what that looks like in the modern era you need only look at the last couple of days of photos sent from Miranda Merron and Armel Tripon who have been trapped in the light winds following Theta.

If the doldrums expand by the time the tail-enders get there it would be most unfair as drifting in calms is not what Vendée sailors dream of when they sign up for this craziness.

Good luck with the macro weather systems in both the North and South Atlantic led to a very consolidated convergence zone helped the front runners sneak through and you can click here to see the video that I made in 2017 that uses bicycle wheels and other practical effects to explain how the two systems mesh together.

Weather models using satellite data can give a good sense of how the doldrums are shaped and positioned but the forecasts break down at the micro-scale because the squall clouds that typically define this sector can’t be captured by the models because they form and dissolve too fast.

Before the start, I coached a couple of rookie sailors in this edition on how best to tackle this area and reminded them that they can track the position and life-cycle of these storms with their on-board radar. But tracking clouds is only so useful if you’re stuck, and here again, the new boats are fundamentally different from those that came before.

Fully powered up in only 10 knots of wind and needing only 12-14 knots of wind to foil and twice the speed of the wind, the skippers can now pounce on every puff of wind in order to drive themselves southwards and into the security of the SE trade winds just above the equator.

The rhythm of small problems, and their complicated repairs, has slowed as the boats have either been caught by sucking calms following the passage of Storm Theta or established a blazing fast rhythm in the trade winds. However, there are three major exceptions.

Tropical storm Theta certainly left its mark on the fleet, but not always in terms of a slingshot towards the south. On-board DMG MORI GLOBAL ONE, the storm left Kojiro’s mainsail, and potentially his race, in tatters. I spoke with Kojiro’s manager, Charles Euverte this morning to better understand what happened.

Kojiro successfully gybed close to the strong winds but ten minutes later the pilot threw the boat into an uncontrolled gybe that pushed the mainsail against the backstay and broke three battens in the upper part of the sail. The problem came from false information from the wind instruments because the pilot then gybed the boat a further two times, smashing the shards of the broken battens through the unsupported mainsail until it ripped from luff to leach. 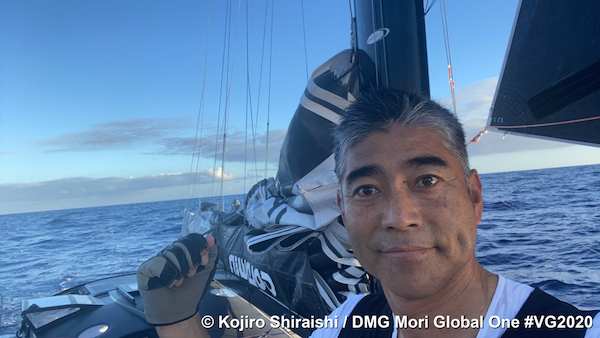 Given the incredible reliability of sail membranes these days, and the constraints of manhandling huge amounts of stiff cloth by yourself, Vendée sailors don’t take sewing machines or great rolls of cloth to make repairs. Self-adhesive patches and flexible glues normally suffice for small running repairs. In order to make such a dramatic repair Kojiro first sought out the calm conditions that have trapped the boats around him and spread the sail on the deck while sailing with this J2 jib.

He has cut sections out the lower section of the mainsail in order to have enough material to repair the top. He has then glued, with Sikaflex, wide strips over the rip and supported the highly loaded areas with solid carbon plates, bolted through the sail. For this of you who have struggled to even carry sails to the sailmaker for repairs, you can imagine that this is a hugely difficult task, and given the paucity of repair materials, he has only one shot to get it right.

He should try hoisting his sail later today or tomorrow. Fingers crossed because his whole race hangs in the balance.

Sadly we witnessed the first official retirement from the race a couple of days ago with Nicolas Troussel’s dismasting. From a technical perspective, it’s difficult to know what went wrong. He was sailing with one reef in the mainsail and his fractional gennaker, his crucial J3 forestay installed and tensioned. Nico was in his bunk when he heard a bang and went on to the deck to see that his was race over and his dreams crushed.

One of the difficult aspects of doing a post-mortem on a mast is that all the pieces that you would like to examine are unceremoniously chucked overboard in order to preserve the hull. Thankfully, as mentioned in previous articles, these boats are now festooned with sensitive load sensors that should identify where the fault occurred. 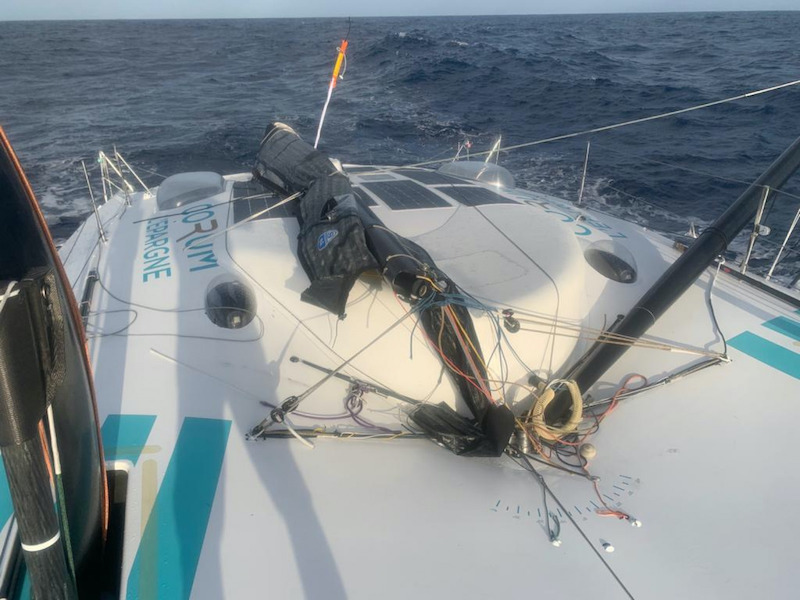 Keep in mind that the masts on all IMOCA boats since 2012 have a one-design mast, built by Lorima Spars and supplied by the Class. Conceived as a way to avoid the frequent dismastings of the precedent era, the supplied mast was thought to be robust and safe, at least before the advent of the foiling generation.

Now, the mast is the weak link again as the dynamic righting moment generated by the foils has made the boats powerful beyond scope of what the mast was designed for.

The Class has voted to keep the current one-design mast as changing it for a stronger one would unleash the architects to further stretch the wingspan of the foils until something else became the weakest link or the boats became completely uninhabitable. It is now up to the teams to design algorithms to analyse the righting moment real-time and alert the skipper as to how close to the limit they are sailing.

Given that Corum is the newest boat in the fleet, maybe they didn’t have time to calibrate this system or maybe something simply failed before its theoretical limit.

We may never know what went ping, but for now, one thing is sure, and that is that Nico is feeling awful. Having dismasted in the last race I know that these projects have brutal highs and lows. Any sailor of Nico’s stature and experience has been dreaming about this race for his entire career.

He secured Corum as a sponsor for the last Route du Rhum with his Class 40, up-sold them the to Vendée, built a boat in record time, and finally embarked on his dream. Along the way, he channelled the positive energy of his fans, his sponsor and their employees and carried their dreams with him. I certainly felt a familiar tug on my heartstrings when I read that he was almost more disappointed for these others, rather than for himself.

On the flip side of that sense of camaraderie with your team, sponsors and supporters, Jérémie Beyou headed off again yesterday for a Vendée Globe completely different from what he has been imagining for the past four years.

Having made a career as a pure competitor, with success measured in the binary of victory or not, it will be interesting to see how Jeremy embraces this new challenge. As a fan of the race, I have often criticised the front of the fleet for not investing in communicating the challenges they have onboard or their real life in the race.

As a competitor, I know that it takes time away from either navigating, trimming, or sleeping but it left me feeling that there was an unbridgeable gulf between competitive automatons at the front and personable, approachable, humans at the back. 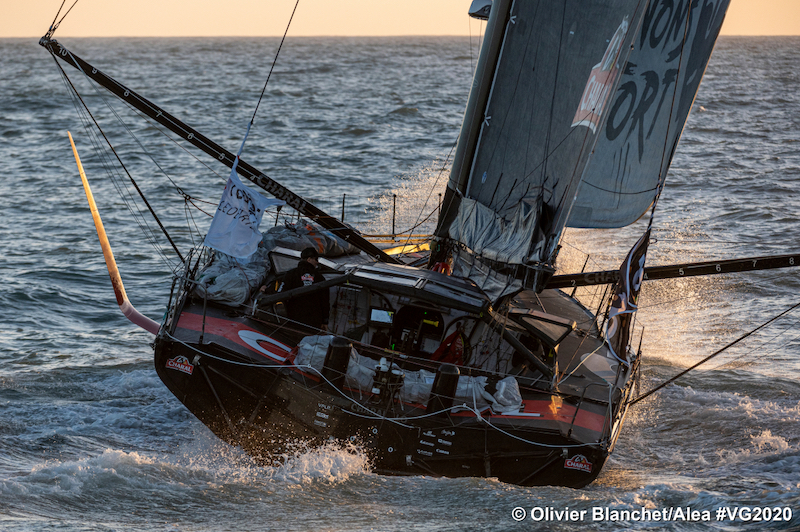 I’m sure that Jeremy will charge hard in order to make up as much ground as possible but he has already said that this will be a voyage of introspection and I hope that he will have more time for us on land now the pressure is off.

A quick note about this section, the butcher’s bill.

Lest do you think I have a morbid fascination with the technical difficulties and breakages that these sailors are experiencing, let me assure you. During my three races around the world, it has become abundantly clear to me that the battle to keep the boat in one piece can be just as difficult as the sporting and strategic elements of the race and often open the window into the true psyche and capacities of the sailors at sea.

From a technical perspective, what these boats go through is without parallel all of the mechanical sport. Formula One cars are completely rebuilt and serviced after every race, Volvo Ocean Race boats receive varying degrees of service in each stop-over but are pulled out of the water and receive a full rigging check several times during the course of their circumnavigation. Indeed, I think you need to look completely outside of the sporting realm, to aeroplanes or space capsules before you’ll find any mechanical system that has a 45,000+ km service interval!

What to watch for in Week 3 and beyond

Looking ahead, the fleet will dive into the South Atlantic in what I believe to be the most strategically challenging sector of the whole race. It’s the only occasion that they will have a whole ocean basin to pick their way across. Sailors must juggle the evolution of the St. Helena high-pressure system as it is pushed from below by the Southern Ocean depressions and frequently cut in two by fast, eastwards moving storms born in either the Rio de la Plata or the bay of Rio.

The forecast for the coming days shows a classic scenario of southeast trade winds, turning east by the time the boats get to the latitude of Recife (easternmost point of Brazil). The leaders should be able to make a direct sprint to the southern ocean along the well-defined front ahead of a South American depression that will bisect the St. Helena high during the weekend.