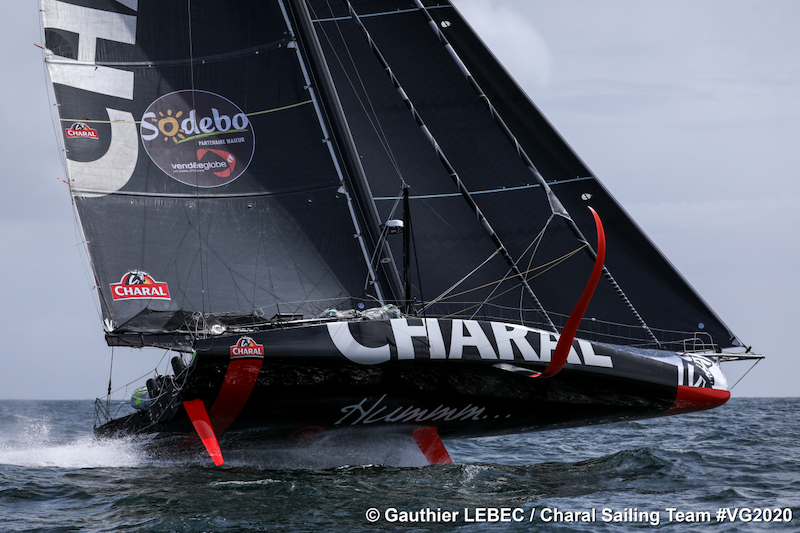 No surprise that although the 33 solo skippers are only on their third full day at sea there has already been plenty of action out on the Vendee Globe racecourse since the start on Sunday.

Exclusively for Yacht Racing Life New Zealand ocean racer and past Vendee Globe competitor Conrad Colman provides some expert insight into what has been going on out on the north Atlantic Ocean.

If there is one consistent theme on the third day of this current Vendee Globe race it is preservation of both man and machine. Having already tackled one cold front in the notorious Bay of Biscay and with another rolling over the fleet as you read this, the 33 sailors are having a tough day out there and some are clearly wondering how to keep this up for months on end.

Seb Simon (ARKEA PAPREC) complained of being seasick for the first time in his life and Clarisse Cremer (BANQUE POPULAIRE), also a Vendée Globe rookie, is, in her own words, already at the end of her tether and is struggling to adapt to the changing conditions.

Both these boats are in the western pack who aggressively sought out the approaching cold front in order to get a jump on the rest of the fleet, but they were rewarded with a brutal sea state and winds gusting nearly 50 knots overnight.

This split between the group in the west that went on the attack (notably including LINKEDOUT, ARKEA PAPREC, HUGO BOSS and APIVIA) and those who stayed closer to the Spanish coast in more sheltered conditions (lead by CORUM and most of the daggerboard boats) gives an early insight into how hard each sailor is willing to push and how the foiling fleet will often sail a longer, faster route than the daggerboard boats like APICIL and YES WE CAM for whom deviations from the rhumb line are more costly.

Yesterday Boris Herrmann made reference to keeping his speed tightly reined in to avoid the worst of the slamming and said that he had sometimes seen Thomas Ruyant going much faster on LINKEDOUT and wondered whether such speeds were sustainable.

For those of you not up to speed on the instruments we have offshore, Boris was able to watch Thomas’s speed from far away using AIS (Automatic Identification System), a system that uses GPS and the ship’s radio to constantly, and automatically, share each boat’s position, speed and direction with all other boats in the vicinity.

Installed in commercial shipping since 2002 and pleasure craft more recently, AIS makes open ocean navigation much safer and has dramatically reduced collisions at sea and in coastal waters. Remember that in 2012 both Louis Burton and Kito de Pavant collided with fishing vessels early in the race, forcing them to abandon.

As the fleet heads offshore the two groups are on a converging course and the fleet will be gruppo compatto again as they strategise about how best to confront their next challenge, Tropical Storm Theta. 2020 has been a disturbing year for reasons that we are all familiar with, but mother nature has made no exception as Theta is the 29th named tropical storm in one season, a terrifying record in one season.

Theta, currently SW of the Azores islands and at the latitude of the Canaries, has cut off access to the typical trade winds that these sailors will be dreaming of after such a brutal start. As the storm tracks eastwards on a collision course with the fleet we will again see the fast foilers break westwards in order to get over the top of the system and slingshot themselves into the trade winds on the other side.

Slower boats who are unable to shoot the gap could face 40+ knots upwind or calms off the African coast, either way an unenviable position! Given how the first week is playing out, I think we can kiss Alex Thomson’s prediction of a possible 59-day circumnavigation goodbye.

Fabrice Amedeo (NEWREST – ART & FENÊTRES) was the first sailor to report damage and made a U-turn on the first night of racing. He appears to have had a lock failure on his big gennaker that caused significant collateral damage, including a crack in the mast. His team has been working around the clock in Les Sables d’Olonne for two full days and last night he was able to head back out to see with a fully functioning boat.

Arnaud Boissiere (LA MIE CÂLINE – ARTISANS ARTIPÔLE) also had a lock problem and had to climb the mast all the way to the top to manually disengage his big gennaker. When he dropped the sail it fell overboard and got wrapped up in his outrigger. This surely made a big mess, slowed him down and used a lot of energy but he hasn’t reported further problems.

Kevin Escoffier (PRB) had a drainage valve on his foil case fail, which lead to significant flooding on the inside of his boat. Any time there’s a lot of water inside the boat it’s really scary because it’s often hard to find the source of the problem and there is a significant risk of secondary damage of computers, electronic systems, to say nothing of your sleeping bag and spare socks!

Thomas Ruyant (LINKEDOUT) also had a problem with a sail, although in contrast with Arnaud Boissiere’s problem where a sail wouldn’t come down, his came down too early.

Normally a furled sail can stay hoisted for a long period of time without problem while the skipper evaluates the changing circumstances and decides whether to drop it definitively or redeploy it in the near future.

Alex Thomson in particular seems to sail with a lot of his sails hoisted, which creates significant aerodynamic drag but does allow him to adapt to changing conditions more efficiently. Seemingly, he has decided it’s worth it.

In Thomas’s case, one of the sales he had hoisted in standby mode bounced off the lock and fell to the deck. This risks the sail becoming damaged while dragging in the water and, if the halyard was damaged or snapped, could require a dangerous and costly mast climb to run a new one. Looks like he got off lightly.

Armel Tripon (L’OCCITANE EN PROVENCE) also had sail problems, this time with his J3 or smallest jib. It appears that some component of the sail, the lock, the furling cable or the textile strop that connects it to the mast has failed. In contrast to the above cases, the problem is more severe, and he is heading to Spain to seek sheltered waters in order to repair the problem.

One concerning problem is that the J3 forestay is required to be tensioned when sailing in rough conditions in order to support the mast, even if the sail is not in use. I hope this relatively small problem doesn’t lead to a bigger one before he makes it to shelter.

Damien Seguin (GROUPE APICIL) Felt his boat slow and looked underneath it to see what the problem could be. He found that a large portion of a discarded fishing net was wrapped around his keel.

All Vendée Globe sailors prepare for this moment and carry a small diving bottle along with mask and snorkel and flippers. He was apparently able to cut the net away without a problem, but spare a thought for Damien, born without his left hand, and imagine not only sailing an IMOCA 60 literally single-handed but also swimming underneath it with a sharp knife on the open sea!

BREAKING NEWS As I write this update the news has broken that Jérémie Beyou (CHARAL), race favourite, and one of the fastest and most prepared sailors on the circuit, is heading back to Les Sables d’Olonne!

Early this morning Jeremy contacted his team to say that he had struck an object and was evaluating the damage. It initially appeared to be minimal and concentrated to the rudder blade, but he recently announced that the damage is more significant and is beyond the scope of what he can repair at sea. He is returning Les Sables to meet with his technical team and they will do their best to return him to race-ready condition.

One note about all this damage at sea and both returning to port either in Spain or back at the start finish line in Les Sables d’Olonne. The three key tenets of the Vendée Globe are “Alone, Around the World, without Assistance” so how is it that Fabrice and Jérémie are able to return to port and Armel is seeking shelter in La Coruña? Firstly, there are two different rules at play here. The start line stays open for 10 days following the initial start and boats are free to return to Les Sables and have access to their technical teams during this time.

Once out on the racecourse however, they must be completely autonomous and while they are free to consult their teams as to how best fix the problem, no one is allowed to come on-board or otherwise render any physical assistance. In the case of Armel seeking shelter, he is able to anchor his boat in a bay by himself and repair his damage so long has he does so by himself.

Storylines to watch out for the next couple of days:

Will Jérémie and his team be able to get him back out on the water before the 10-day time limit? Will the weather, that hasn’t been particularly fast or favourable allow him to reconnect with the fleet like Michel Desjoyeaux did in 2008?

How will the fleet negotiate Tropical Storm Theta? Will the foilers make it around the western side of the storm?

Which sailors will have their speed, and position in the fleet, impacted by breakages?

There’s going to be plenty going on, so stay tuned and stay alert!