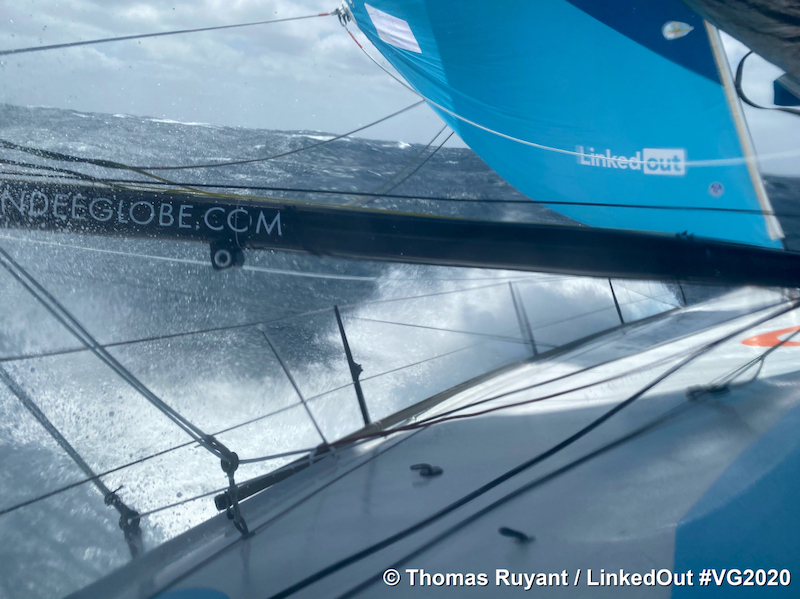 With the joyful news of last night’s successful rescue of French skipper Kevin Escoffier still resonating around the Vendee Globe fleet today the leading pair Charlie Dalin on Apivia and Thomas Ruyant on LinkedOut have passed the Cape of Good Hope and are racing hard through the Southern Ocean.

Dalin passed the longitude of the Cape of Good Hope on Monday at 2311hrs UTC, 22 days nine hours and 51 minutes since leaving Les Sables d’Olonne on Sunday November 8. Fourteen hours and a half hours later it was second placed Ruyant’s turn to pass Africa’s southernmost point.

Ruyant described difficult conditions in the hours leading up to passing Good Hope.

“For me, it’s a bit wild at the moment,” he said. “The breeze is around 35-38 knots on rough seas. These are not very nice conditions – it’s really quite hairy. And it’s hard to go fast too because the sea is so choppy and the boat gets stuck in the waves. It’s hard even to figure out the right sail to have to make good progress.”

At 1400 UTC Dalin held a 218-mile lead over Ruyant with the pair averaging speeds in the mid-teens.

Meanwhile sitting in relative safety at the navigation station aboard the boat of his rescuer Jean Le Cam, Kevin Escoffier described the horrifying moment his own boat PRB incredibly folded in half while surfing down a wave at high speed.

“It’s unbelievable what happened,” Escoffier said, his voice animated by the adrenaline understandably still pumping around his system.

“The boat folded up on a wave at 27 knots. I heard a bang, but to be honest, I didn’t need to hear that to know what had happened. I looked at the bow. It was at 90 degrees. In a few seconds, there was water everywhere.

“The stern was under water and the bow was pointing up to the sky. The boat split in half in front of the mast bulkhead. It was as if she folded up. I promise. I’m not exaggerating. There was an angle of 90 degrees between the stern and the bow.”

Happily, at the time of the incident Escoffier was on deck with his survival suit close at hand, as the catastrophic failure meant he had only time enough to call in a mayday to his shore team before donning his survival suit and scrambling into his as waves threatened to wash him off the boat.

“I didn’t have time to do anything,” he said. “I just had time to send a message to my team: ‘I’m sinking I’m not joking – MAYDAY’. Between the moment when I was out on deck trimming the sails and when I found myself in my survival suit, barely two minutes had passed. It all happened extremely quickly.”

“I came out of the boat and put on my survival suit,” Escoffier continued. “I could see smoke. The electronics were burning. Everything went off. My only reflex was to grab my telephone to send the message and pick up the survival suit which I never stow away.

“I wanted to pick up the grab bag, but I couldn’t get to it with the water rising. I grabbed the liferaft at the stern. Open, I couldn’t get into it as it was three metres under the water. The water was up to the door in the cockpit.”

Alone in the liferaft Escoffier confessed he was less than certain of his fate, given that the light would soon be fading, and the 35 knots winds were whipping up five metre waves.

“I would have liked to have stayed a bit longer on board, but I could see it was all happening quickly and a big breaker came and I was in the water with the liferaft,” he said. “At that point I was not feeling very confident.”

“Being in a raft in 35 knots of wind is not reassuring. I was only reassured when I saw Jean. But the problem was to find a way to get on board with him. We said a few words. It was a real battlefield out on the water. He was forced to move away, but I could see he remained close by. I stayed in the raft until early this morning.”

Eleven hours and a half hours since abandoning his sinking yacht and after a sleepless night spent drinking some of his emergency water and food, Escoffier heard a flapping sail outside and emerged to see the welcome sight of Le Cam’s IMOCA 60.

By the sound of Escoffier’s description, although the weather had moderated somewhat, conditions were still very difficult. The rescue did not go perfectly, but in the end Le Cam got close enough to throw Escoffier a line and eventually the 40-year-old PRB skipper was able to scramble aboard.

“I didn’t know whether the weather would ease enough to carry out a manoeuvre,” he said.

“He was two metres from me. He sent me a line, but it was difficult to stop the boat. In the end I managed to reach some tubing and lift myself aboard. The sea was still heavy with three and a half metre high waves.

“It is hard in such conditions to climb aboard a 60’ boat, particularly as it is hard in the survival suit. It’s lucky I’m in good shape physically, as I can promise you it is not easy.”

No surprise that the first thing the two hugely relieved skippers did at that point was to exchange a well-deserved hug.

“When I found myself on board with Jean, we hugged each other,” Escoffier said. “He said to me: ‘Shit you’re aboard. That was tricky!’. I replied: ‘I have spoilt your race. You were doing so well’. He replied: ‘That doesn’t matter. Last time it was me who upset Vincent’s race.’”

As to what will happen next, Escoffier and Le Cam will need to wait to hear from the race management team who are no doubt weighing up all their options.

“For the moment, I don’t know what will happen,” Escoffier said. “We’ll sort that out with the race directors. I have just slept for two hours and am well rested. I have eaten something.

Casting his mind back once again to the breakup of the boat he had prepared so carefully to take on the Vendee Globe, Escoffier shook his head once more in disbelief at the memory.

“I did all I could with the boat,” he said. “I reinforced her and did everything – so I don’t have any regrets about what I did.”