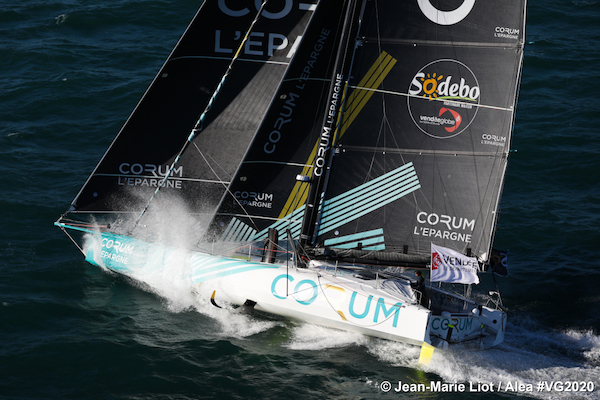 French skipper Nicolas Troussel who was lying in seventh place in the Vendée Globe has dismasted on CORUM L’Épargne this morning.

He was racing south in brisk north-easterly trade wind conditions some 260 nautical miles north west of the Cape Verde Islands.

Prior to the incident Troussel had reported fast but uncomfortable conditions on board as he sped south in pursuit of the leading pack.

“It is a speed course towards the Doldrums with no manoeuvres but it is not very comfortable as it slams but it is OK,” he said at 0500 this morniung.

“There is not really a lot of sea. We are foiling and it is fast and you have to pay attention. It is not easy to do anything really, not easy to sleep to get in the bunk. I have an energy problem I broke a hydro-genator, we don’t have a solution for the moment.

“I have one reef in the main and my small gennaker up.”

Troussel, 46, was not injured in the dismasting and is currently in the process of securing the boat before further assessing the situation after sunrise.