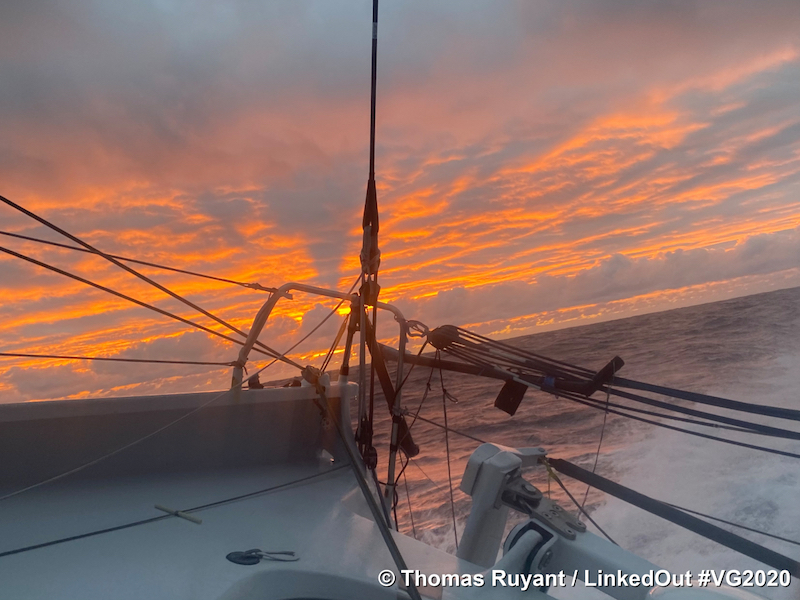 Vendee Globe leader Charlie Dalin on Apivia has seen his first place advantage reduced by more than half as he struggles through light winds around a high pressure zone around 630 nautical miles (nm) west of the longitude of Australia’s Cape Leeuwin.

Dalin was the first to e slowed by the lightening winds which tonight has allowed the chasing pack to shave his once 250 nm lead down to just 88 nm over second placed Thomas Ruyant on LinkedOut and 101 nm over Yannick Bestaven on Maitre Coq IV.

“Charlie is facing an area of lighter winds for a few hours and those chasing after him are sailing in 15 to 25 knot southwesterly winds, delivering them high speeds and allowing them to narrow the gap,” noted Christian Dumard, the race’s weather expert, this morning during his briefing at the Vendee Globe headquarters.

Dalin’s marked slowdown has also caused some to speculate that the 35-year-old might well also be hiding damage to his bright yellow IMOCA 60.

Vendee Globe veteran Jean Pierre Dick said today on the French Vendée Globe Live show that he believed Dalin was bogged down in light winds, but was unlikely to confirm this for fear of giving an advantage to his competitors.

“The leaders do tend to keep quiet about any issues they might have, to not give away anything to those chasing that might give them a chance to use it against them,” Dick said. “That has often been the strategy of past leaders such as François Gabart, Armel Le Cléach or Michel Desjoyeux.”

Whether he is disguising damage or not, Dalin is certainly showing no signs of nerves and continues to play the long game in an assured fashion that belie his status as a Vendee Globe rookie. Despite his losses he will no doubt be reassured that he has a boat that is at least as fast as any of the chasing pack in tems of straight line speed.

Second placed Ruyant can not be as confident given the reduced performance potential of his boat due to damage to his port foil which he estimates his costing him around 20 per cent of his speed on staboard gybe.

“These are the kind of conditions where I really miss it,” he said today. “But hey, it’s like that and it’s going to be like that until the end of the race. I’m not complaining but I’m losing about 20% of the boat’s potential on this starboard tack.

“In the breeze it’s a bit less noticeable, but in certain conditions, like we have at the moment, it’s five extra knots that just go up in smoke.”