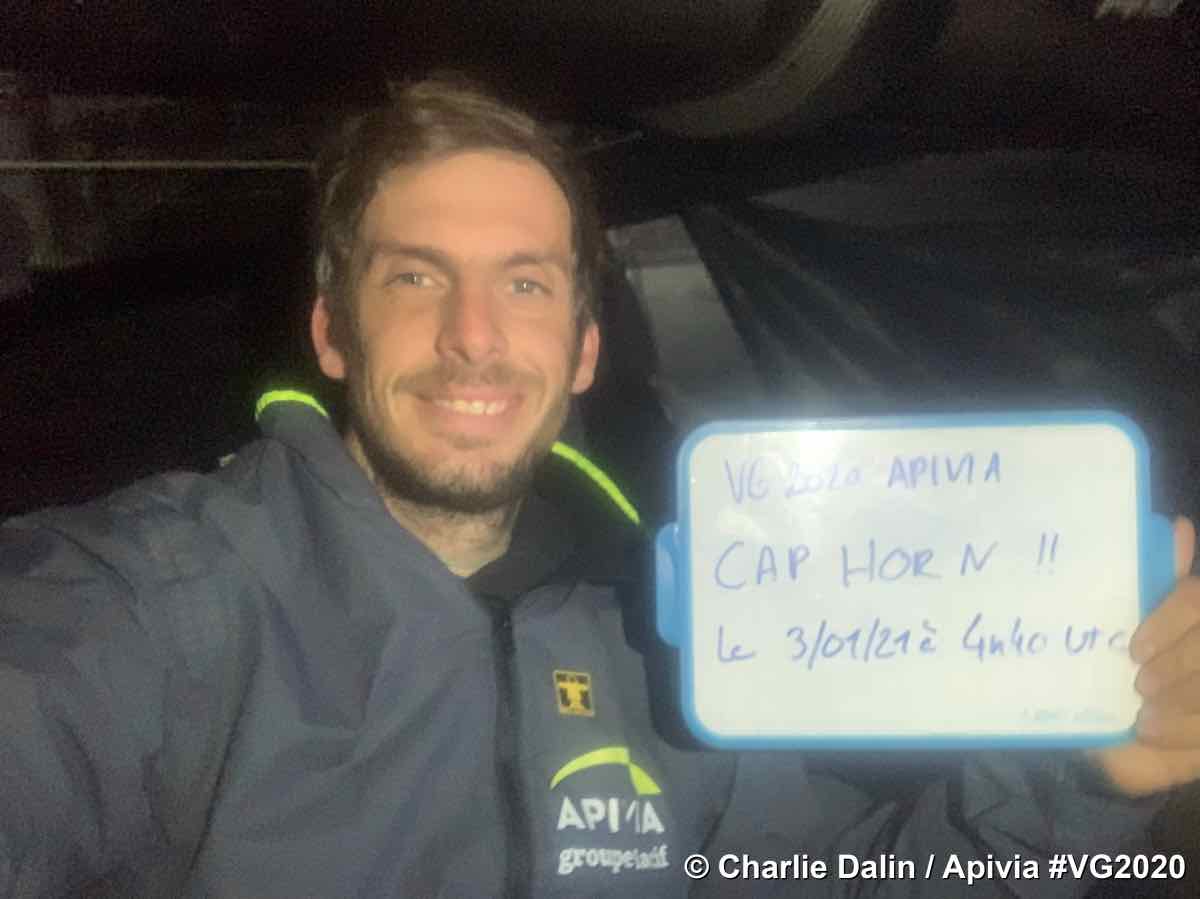 Charlie Dalin (Apivia) has become the second Vendee Globe skipper to round Cape Horn. The 36 year old French skipper who originates from Le Havre, rounded at 0439 on Sunday January 3, passing much closer than leader Yannick Bestaven on Maître Coq IV did, 14 hours and 56 minutes earlier.

Fighting his way north in 30-35 knot winds on his Verdier-designed IMOCA Dalin was just six miles offshore of Cape Horn, passing during the hours of darkness.

But the first timer in the ‘big south’ – as yesterday was Bestaven – completed his initiation as a Cape Horner by calling the keeper of the lonely lighthouse at the end of the world and passing on his thanks and his regards, while quietly savouring the intense relief, the satisfying moments of deliverance into the ‘home’ Atlantic Ocean.

Dalin sounded a tiny note of regret. That he had led at two of the race’s three Great Capes and not the third is contrary to his methodical, empirical mathematician’s mind – his ideal of completing the set.

But if anything it will add fuel to Dalin’s desire to get back on terms with Bestaven during what promises the climb back up the Atlantic that looks set to be every bit as complicated – big picture strategy and small time tactics – as was the descent out of the Saint Helena high into the Roaring Forties five long weeks ago.

“It’s just bliss. A great moment. I am also happy to no longer have the big seas that have been with us us for several days ” said Dalin who described himself as a ‘perfectionist and an optimalist, someone who will always do the best I can with what I have’ before he started his first ever round the world race back in Les Sables d’Olonne. Dalin has had to deal with a compromised port foil bearing which caused him to cede the lead to Bestaven back on December 16th, though he did have the lead again momentarily on Christmas Day.

Bestaven, who is pushing for a more easterly route to the east side of a building high pressure, was almost gushing as he relived his relief during the hours since Cape Horn,

“In my life as a sailor, that was the biggest storm I have ever seen. Mad seas, such as I have never seen so big, and gusts of 60 knots. It’s a huge relief now because it’s been so hard.”

Bestaven looked drained said on the French live show today. “When I got into the calm I was totally knocked for six, I was really exhausted.”

Dalin, also speaking on the Live show today smiled broadly: “I celebrated by putting up more sail (laughs). I passed close to the islands, the rocks no doubt, it was the first land I had seen since the islands of Trinidad. I had forgotten that it existed after so many days. The continental shelf was parallel to the swell and the wind, so I didn’t notice any difference in the sea state. On the other hand, I had to get offshore a bit so that I did not end up in the wind shadow.”

Talking of the change of regime, Dalin, “Jean Luc Bernot always tells us that we have to change our mode after Cape Horn, I’m going to do that. It’s a good thing to be back in the Atlantic. I’m happy to have finished with the Pacific. It’s a new phase of the race. I’ve been working for a few days now on the strategy for the climb back up, there are quite a few things going on.”

A complicated South Atlantic lies ahead

Now the strategy for the climb back to the Equator is all about looking long term. The initial strategies seem to see Bestaven going east to get round the east of the anticyclone and Dalin trying to work west to get through the initial light phase earlier. Dalin – looking like he will pass inside Staten Island through the Le Maire Straits – will gain initially but the real outcome would not be seen for more than ten days when they finally get back to the trade winds of the Saint Helena anticyclone.

He adds, “There is a lot of work right now ahead of them, one high pressure, one low pressure and a high pressure to get to the Trade Winds and beyond that to the Doldrums. So the next 14 days will be hard, intense work for the two leaders.”

The mountain ranges in southern Chile rise to more than 3,000 meters and the islands of Patagonia have peaks of nearly 1,000 metres. In the westerly wind there can be very many areas of light winds especially closer to the land. And even though weather modelling has improved a lot here, the reality on the water is often different from the models. And as Dalin notes today, they are out of big ocean mode and back into regatta mode, from maintaining high, safe average to fine tuning, sleeping less and trimming more, looking for every marginal gain.

A high pressure system is developing now from the coast of South America, north of the Falkland Islands. It will then gradually extend to the AEZ forcing the second group to cross it or make a big detour to the east, but with no real certainty of finding any extra wind.

Christian Dumard, the weather specialist who works in tandem with Josse, confirms, “There are two possible options, to the follow the direct, shortest route north and try to push through the high before it expands too much, or to go east in search of more wind which is the better long term option.”

Thomas Ruyant (Linked Out) and Damien Seguin (Group Apicil) are neck-and-neck in their race to be third at Cape Horn, Seguin a matter of five or six miles closer to the rock (14:00 UTC ranking). With 195 nautical miles to go the pair should round in quick succession Monday morning.