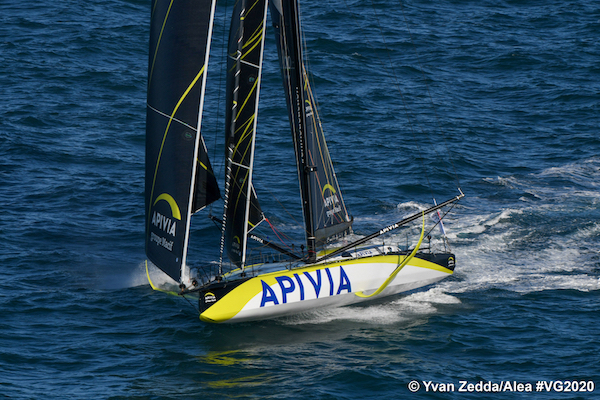 After a sequence of gybes stepping downwind around the Saint Helena high pressure system in the South Atlantic, Charlie Dalin on Apivia has become the new leader of the Vendee Globe, on the fifteenth day of the solo around-the-world race.

Dalin outmanoeuvred his close rival Thomas Ruyant (LinkedOut) and went on to build a 20 mile lead as they slalom towards an area of lighter and variable winds which bar the breakaway duo’s passage to the roaring forties which are still some 600 nautical miles to their south.

Dalin topped the standings on one position report earlier in the race, but he is one of ten different leaders since the solo non-stop race round the world started on Sunday November 8.

As the leading duo pass the latitude of Itajai, Brazil they have more than 250 miles in hand over third placed Jean Le Cam (Yes We Cam), although the wily, persistent veteran Le Cam is more than holding his own.

Dalin and Ruyant, who both originate from the north, from the Channel coast of France, may yet see two areas of high pressure join together to make the course south extremely tricky.

As the top group try to find the best routing through a complex weather pattern, at 16-18 knots of boat speed this afternoon, British skipper Alex Thomson remained purposely slowed in light winds, more than 350 miles north west of the leaders. Thomson is 48 hours into dealing with a complicated series of repairs to the main central longitudinal support beam towards the bow of his Hugo Boss IMOCA 60.

The British racer sent two detailed videos of the damage today, on which he said:

“The problem is fairly significant. The central longitudinal is broken in several places. The good news is we carry so many materials to fix this kind of thing, c-plates, solid panels, and even girders, we have plenty of materials to fix it and the other bit of good news is that I am not in the Southern Ocean.

“I am in the middle of the Saint Helena High and so have good conditions to be able to do the job and the other good news is I feel super positive and happy to crack on to get this job done and get back in the race as soon as possible. So I don’t feel sad. It could take another day or so to do the repair and the engineers and designers are absolutely confident the boat will be as strong ,if not stronger, than before.”

From his position 120 miles off the African coast, Jérémie Beyou offered his British counterpart his support today. The French sailor should have been Thomson’s main rival on this race but while Thomson repairs, Beyou is chasing the fleet still 600 miles behind back marker Kojiro Shiraishi and 3000 miles behind Dalin. Their Vendée Globes are now massively different to what they hoped for.

Damage to his Charal means Beyou had to return to Les Sables d’Olonne and restart nine days after the original departure. So just as Thomson acknowledged yesterday repairing can be part and parcel of the Vendée Globe, so Beyou’s race to catch up has become a different Vendée Globe too, one of self discovery and a test of motivation.

“In terms of morale I have ups and downs” said Beyou this morning. “Right now, I’m sad for Alex, because it’s a pain in the ass for him, it’s a pain to see him slow down. He’s got a big repair to do, it’s really not cool.

“I’ve been thinking about him all day. I support him, I hope he will fix it and get back in the fight soon. But when I see that I am 3000 miles behind the lead, that I am in the North Atlantic while they are at the bottom of the South Atlantic, it is not easy to live with. I take advantage of the fact that the boat is going well, and I’m making progress hour by hour.”

Thomson’s German friend and rival Boris Herrmann (Seaexplorer – Yacht Club de Monaco) was the next in line to benefit from the Hugo Boss sailor’s problem and moved up to fifth this afternoon.

Britain’s Sam Davies (Initiatives Coeur) is in tenth and pressing hard to stay with the newer, theoretically faster ARKEA PAPREC of Sébastien Simon. At the back of the second group of six boats, Davies might take an option to dive south early and potentially sail more miles but avoid the messy roadblock of light winds which are forecast to develop.

Her British compatriot Pip Hare, who is on her first Vendée Globe, brought Medallia across the Equator into the South Atlantic this afternoon after a challenging Doldrums passage. She is in 20th place in the 31 boat fleet, 11 miles up on Catalan rival Didac Costa – a former rival from Mini 650 days.

The duo will be profiting from each other’s competitiveness, not least as the full time fireman from Barcelona had very sporadic contact with other skippers on his 2016-17 race because he had to restart four days late due to a ballast tank leak which flooded his alternator.