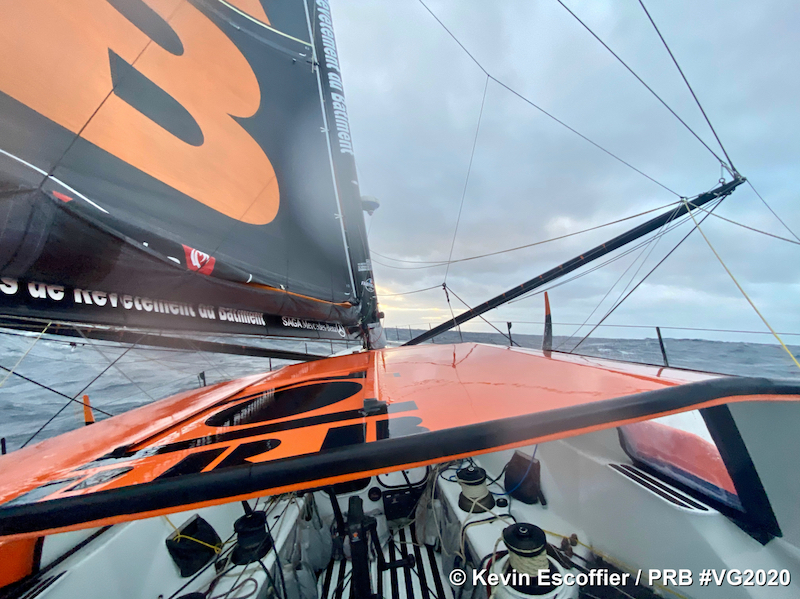 Vendee Globe fleet leader Charlie Dalin is today expected to round the first great Cape of the 2020-21 edition of the solo around-the-world yacht race.

Dalin – racing in the Vendee Globe for the first time – is at the head of a pack of boats now sailing in strong south-westerly winds on the approach to South Africa’s Cape of Good Hope headland.

The weather for the pacemakers is much colder and this passage past the tip of the African continent promises to be quite tough because the wind is blowing in the opposite direction  to the strong Agulhas current flowing down the east side of the cape, bringing warmer water from the Indian Ocean.

The leaders who are now mostly in the south westerly air flow are experiencing much colder temperatures –around seven degrees centrigrade – and unstable winds around 25 knots with gusts up to 35 knots on big. Big seas sluice over the deck, rinsing the boats with seawater no warmer than 8 C.

The leading pack is sailing behind a weather front and heading south-eastwards towards the race managment enforced Antarctic Exclusion Zone (ice gate).

After three weeks of racing through the north and south sections of the Atlantic, the solo skippers are getting their first cold and wet reality check as they enter the notorious Southern Ocean.

Racing around the bottom of the world is not for the faint-hearted. It’s a place where the sun mostly fails to break through the cloud cover and the cold temperaturesmake the air so dense that the gusts are much more powerful than the recorded windspeed.

At the front of the fleet Dalin has routed more to the north, up to the 38 degrees parallel, meaning he will have to negotiate the swirling gyres of the Agulhas current with huge confused cross seas kicked up by the opposing wind.

Behind him in the the chasing pack of six second placed Thomas Ruyant (LinkedOut) is hampered by an unusable port foil after a collison. That said, the big seas mean the foilers will not be drawing on all their power and righting moment right now, so Ruyant as well as Jean Le Cam on his trusty daggerboard Yes We Cam may not be be disadvantaged much.

Meanwhile, the first big southern storm is on its way.

Third placed Kevin Escoffier (PRB) had this to say this morning:

“There is definitely quite a bit more sea now and this is just the start. I looked at the nav last night to find a route that takes into account a lot of different parameters: the state of the sea, the Agulhas current, not going too far to the north and take a bashing with the wind against the current , and also the wind. We have a first blow, but it is especially the second with the next frontal passage that really influences our routing decisions.

“The weather files are not yet agreed on the passage of this new southern depression: you have to position yourself for the first but really well for the second one. You don’t want too much wind bit need to not lose too much distance on my competitors.

“With my group here we made the choice not to be too close to Good Hope and the waves and the current of the Agulhas. Charlie Dalin should avoid the second depression, but we, the chasing group, are going to get it.

“The passage of the front on December fourth is likely to be quite big. We will have our first gale with 35 knots and six meters of waves. We already have four meters of waves with a fairly irregular wind that goes from 20 to 30 knots.

“On the temperature side, it’s still OK but I’m starting to layer up with fleeces. And the water has is cooler for sure. You really feel the difference from being in the Saint Helena high pressure system. But I still spend some time outside, trimming, I see some of my rivals are sailing higher so I need to change sails.”

Main image: On board with third placed Kevin Escoffieer on PRB