Skip to content
You are here
Home > Editorial > Vendee Globe: Dalin Burton and Herrmann to duke it out over final 500 miles 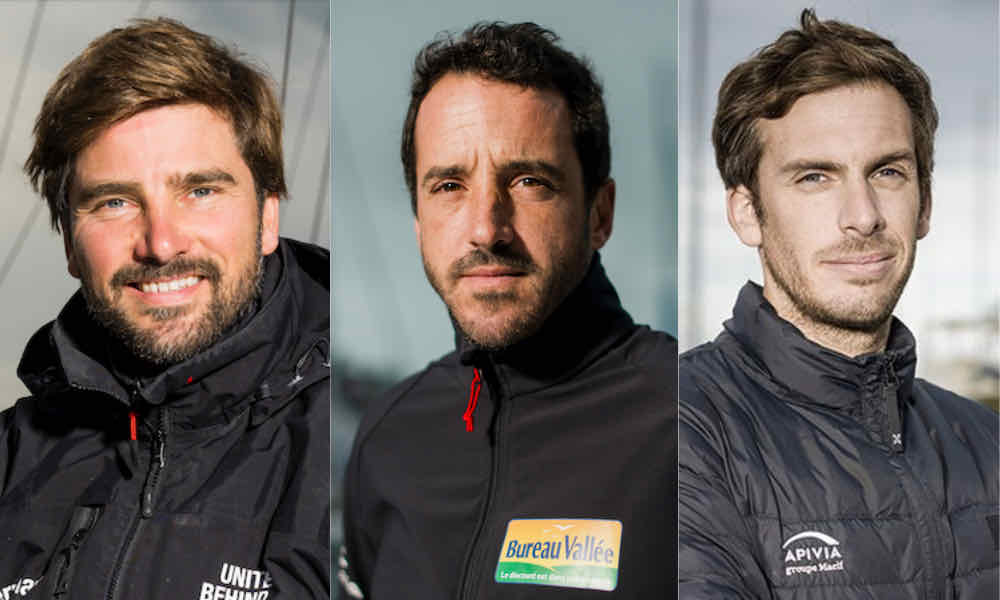 After more than 11 weeks and 24,000 miles of racing in the Vendee Globe solo nonstop around-the-world yacht race the likely winner is still not clear this afternoon as the top three skippers close to within 700 miles of the finish line off the French port of Les Sables D’Olonne.

Only one of these three frontrunners was earmarked as a potential winner last November 8 when the 33 boat Vendee Globe skippers surfed away from Les Sables D’Olonne under clear skies to begin their round the world adventure.

Back then Apivia skipper Charlie Dalin was a rookie entrant to the race. However his impeccable racing pedigree and his canary yellow state-of-the-art latest generation IMOCA 60 equipped with some of the largest foils in the fleet put him on many people’s list as a strong contender.

More of an outside bet perhaps was St Malo resident Louis Burton on Bureau Vallee II who had raced the Vendee Globe twice previously but only finished once – a creditable but unremarkable seventh place in the 2016 edition. This time however Burton had a well-proven boat in the form of Armel Le Cléac’h’s winning foiler Banque Populaire VIII from the last edition.

The third of today’s leading trio – German Boris Herrmann – came into the race as a well-liked and highly respected navigator and skipper with a strong track record in around the world sailing from his own Class 40 and Barcelona World Race campaigns and as part of Francis Joyon’s IDEC Sport crew on a Jules Verne Record attempt.

Herrmann and his team invested heavily in upgrading their 2016 generation IMOCA 60 – previously Seb Josse’s Edmond de Rothschild – with substantially bigger foils and lots of reinforcement to the hull. Prior to the start most people had Herrmann down as a likely finisher, and some had him earmarked for a podium place.

It’s fair to say that once the race got started only Dalin lived up to his pre-race billing as a potential winner. After taking a conservative approach to the north and south Atlantic sections he took the lead when the fleet entered the Southern Ocean and seemingly coped well with the pressure of being up front for weeks on end.

He even dealt confidently with near disaster. When a foil system failure threatened to force him out of the race Dalin – a naval architect – spent hours working diligently to craft a repair – including dangling perilously over the side from a halliard to complete the job before darkness fell.

Likewise he didn’t lose heart when he lost the lead to Yannick Bestaven on his smaller-foiled Maître Coq IV. Bestaven rounded Cape Horn well ahead and looked at one point likely to do a horizon job on the chasing pack as he picked his was skilfully around the St Helena high pressure system. Despite being slowed by his damaged foil on starboard gybe Dalin kept the faith, biding his time until an opportunity arose off Brazil to get back in the lead.

At this point Burton and Herrmann were just members of the supporting cast in the vanguard of the fleet trying to chase down the leaders.

Both had suffered damage in the deep south. Herrmann had to repair a badly torn leech on his mainsail as he rounded Cape Horn in stormy conditions. Burton had to stop for a day at the remote Macquarie Island outcrop to find enough shelter to anchor his boat and climb the mast to effect repairs to his battered wind instruments.

On January 5 as Herrmann past Cape Horn and began to turn his bows north he was 740 miles off the lead. Ahead of him, Burton was doing better but was still more than 600 miles from the lead.

At this point surely neither skipper were seriously entertaining thoughts of challenging for the overall win. But if ever the age-old sporting mantra of ‘never ever give up’ would prove valid, it was now as the pair wriggled and squirmed their way through the swirling wind zones and windless holes that littered the South Atlantic as the front section of the Vendee Globe fleet worked its way north.

Somehow – and we will have to wait until they finish for them to tell us how exactly – by January 13 Burton was in second place 23 miles behind a near-becalmed Bestaven, and Herrmann was up to sixth, a mere 40 or so miles astern.

Since then the fortunes of the two comeback kids have waxed and waned at various times as they execute their differing race strategies. But today at 1400 UTC off the coast of Portugal Burton sat in second place, significantly further north but 27 miles further from the finish than leader Dalin. Herrmann meanwhile was in third – 78 miles behind.

And as if the dramatic tension of the prospect of such a close finish to a nonstop around the world race were not enough, let’s not forget to factor in that once he crosses the finish line, third-placed Herrmann will receive six hours of compensation for the time he spent searching on December 1 searching for fellow competitor Kevin Escoffier adrift in his life raft after his boat PRB broke up and sank while surfing at speed down a wave.

That means if Herrmann can stay close enough to his two rivals he could become the first non-French winner of the Vendee Globe in the race’s 32-year, eight-edition history. Or will Dalin be able to coax his latest generation foiler into a final burst of speed to give him a memorable Vendee Globe victory at his first attempt.

Or will Burton squeeze back ahead to claim the win and write a place in the history books for his trusty IMOCA 60 as the first two-time winning boat.

The only thing that is sure is that nothing will be certain until all three have crossed the line and donned their Covid 19 masks to be greeted by their shore teams. Right now the routing has Dalin and Burton finishing in daylight on Wednesday January 27, with Herrmann coming in during the hours of darkness that night.

Until then let’s keep checking the tracker – it will switch to 30-minute updates when the first boat gets within 200 miles, and then update every five minutes once the boats are within 60 miles of the finish.