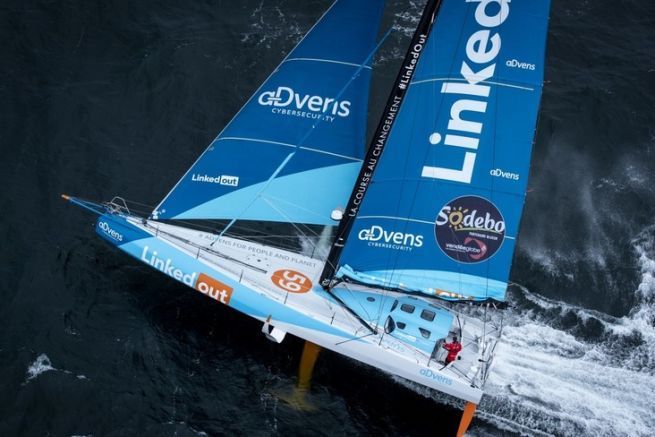 The Vendee Globe leading duo Charlie Dalin and Thomas Ruyant appear to be through the worst of the stormy conditions of the last few days and look set for a relatively smooth ride Cape Leeuwin on the southernmost tip of Australia, 1250 nautical miles – about three days sailing – ahead of first-placed Dalin.

The Apivia skipper had a lead of 250 miles over Ruyant last night and was more than 120 miles further south after having endured the worst of the past few day’s Indian Ocean storm. Gusts up to gusts to 55 knots and huge seas during the early hours of this morning forced Dalin to triple reef his mainsail and alternate between a tiny storm jib and no headsail at all.

Winds have eased down to a more manageable 30 knots and the two pacemakers will soon get into more favourable south westerlies around 20 to 25 knots that should take them all the way to their Leeuwin Island – the second of the race’s great capes.

Ruyant passed seven miles north of the tiny and remote Amsterdam Island early this morning after following a routing which kept him out of the worst of the strong depression.

“I didn’t really have a choice,” Ruyant said. “Charlie had enough of a lead to stay ahead of this front for longer but for me that would have been too hard.”

The LinkedOut skipper, who won the 2010 Route du Rhum in the Class 40, saw a couple of hours with gusts to 60 knots and then had a to make a difficult but controlled gybe in 40 knots.

“I’m glad I passed this last big hurdle in the Indian Ocean,” he said today. “Of course anything can always happen, and we are not immune to anything, but that should be the last big weather phenomenon before we get to the Pacific. ”

Meanwhile the chasing pack are still experiencing strong winds and big seas in the wake of the leading duo.

Louis Burton, the most southerly of all at 45 degrees south, has regained third place ahead of Yannick Bestaven, Benjamin Dutreux and Boris Herrmann. For the last three days Seguin on Groupe APICIL has been trying to solve the electrical problems that have been causing his autopilot to disconnect. Fortunately, the situation appears to be back under control.

“It is the size of the waves and their direction that dictate what you do” Seguin said. “You have to do work so hard just to take care of yourself, otherwise, it becomes unliveable. You reduce sails just to be able to eat and drink.”