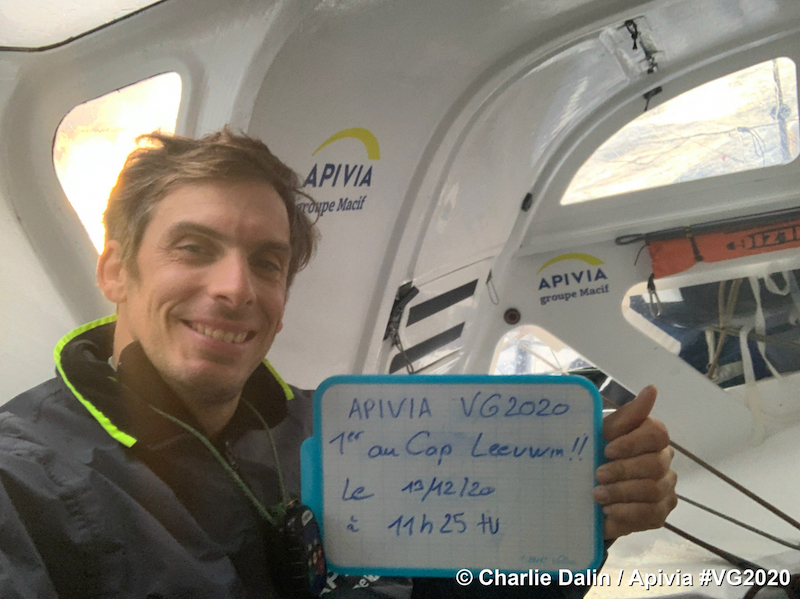 Long-time leader Charlie Dalin on Apivia was the first skipper to pass Australia’s Cape Leeuwin today after 34 days 22 hours and five min of racing in the 2020-21 edition of the Vendee Globe solo around-the-world yacht race.

Dalin passed the longitude of the landmark cape today at 11:25 UTC, 12 days seven hours and 10 minutes since leading the fleet past South Africa’s Cape of Good Hope.

Back then he had a solid lead of around 200 nautical miles (nm) over the chasing pack but today the French skipper must almost be able to feel the warm breath of his closest rivals on the back of his neck, as both Thomas Ruyant and Yannick Bestaven have now closed to within 100 nm.

Today all three skippers are enjoying some fast sailing in moderate winds around 16 knots that sees them hitting high teens and low twenties in terms of boat speed.

These conditions will come as a relief after the fiercely stormy conditions they experienced earlier in the week as they each had to deal with the passage overhead of an intense and fast-moving Southern Ocean cold front that tore eastwards at around 25 knots.

After surviving what he described as the worst conditions he had ever experienced, Dalin was then the first to suffer a slowdown in light – non-existent at times – winds in a huge high pressure system that blocked his path.

At times he estimated he was losing 16 nm per hour to his two rivals who stayed in the breeze longer and were able to reduce Dalin’s advantage to under 100 nm for the first time since they entered the Southern Ocean.

Since passing Leeuwin, Dalin has put the hammer down and lit the afterburners aboard Apivia, this afternoon recording his fastest speeds in the last 1,000 nm in the Indian Ocean with sustained averages over 24 knots.